Question 2.
What is the eightfold path?
Answer:
According to Buddha, the final goal is attaining Nirvana. It could be achieved by following the Eightfold Path. These eight aspects are to be practiced to attain Nirvana. The eightfold path is also known as Ashtanga Marga.

Question 3.
Write two slogans to encourage religious unity.
Answer:
“We may have different religions, different languages, different colored skin, but we all belong to one human race – Kofi Annan “ Where there is Unity, there is Victory”.

Question 6.
What is Arya Sathyas?
Answer:
The teachings of Gautama Buddha are called four noble truths or Arya Sathyas They are:

Question 8.
There are many problems that affect the Indian National Integration at present.
What are the reasons for this? How could these be addressed?
Answer:
Problems that are affecting the National integration are :

All the parts of India have to develop equally in all fields. Oneness feeling is to be created and developed in all the people of India. Then this problem can be solved.

Question 9.
Locate the given places on the outline map of India. 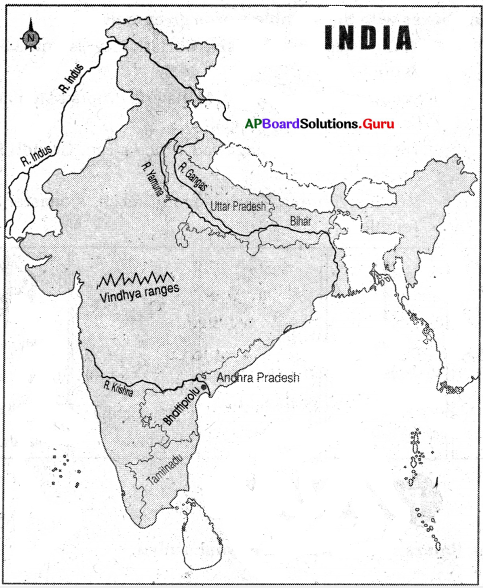 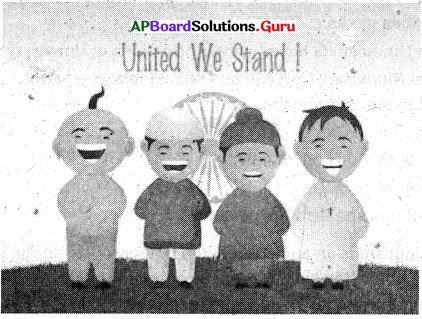 Question 2.
Read the holy books of all religions, know about the biography, teaching and theme of the religious gurus.
Answer:
Hinduism: Hinduism is based on the principles of Universal truth.
According to Hinduism – God can be realized in many paths. Hinduism says that God exists in all living and Non-living things.

Pursuit of moksha through penance.
Jainism: Jainism is an ancient religion that is rooted in the philosophy that teaches the way to liberation and a path to spiritual purity and enlightenment through disciplined non-violence to all living creatures.
Tenets of Jainism:

Quran: Holy book of Muslims. Muslims believe that Quran was verbally revealed by Allah to Muhammed through the angel Gabriel.
In Quran God warns human beings to find a proper way to reach happiness and perfection.
Teachings:

Every Muslim should become a servant of God.
Buddhism: Buddha asked his followers to avoid indulgence in worldly pleasure and practice strict abstinence and asceticism. According to Buddha, everyone was responsible for their own happiness in life. The main teachings of Buddhism are encapsulated in the basic concept of Four noble truths.
Christianity: Jesus Christ was the eternal word of God who assumed human form to serve humanity and to rescue human beings. Jesus Christ suffered and died to redeem mankind from sin. Christians believe that Jesus Christ now sits at the right hand of God as the final judge of the dead and the He will return again as prophesized.

Question 3.
Field visit:
Visit a nearby place of worship, and observe the activities and discuss with your class.
Answer:
Student Activity.

Question 1.
Invite a Mend of other language and interact with him/her. (Textbook Page No. 123)
Answer:
(This question is answered keeping in view the question given in the 2nd lesson)
Venu met some children from different cities at a youth festival. Venu wants to talk to them. He wants to know about their culture.
Venu: Hello Nihal. I am Venu. I am from Guntur, Andhra Pradesh.
Nihal: Hello Venu, I am from Delhi.
Venu: What is your father. My father is a bank officer.
Nihal: My father is working in railways.
Venu: What is your mother tongue? How many letters are there in your mother tongue?
Nihal: My mother tongue is Hindi. I will tell you some interesting facts. Hindi is an Indo-Aryan language. Hindi is mainly spoken in India. Hindi is the official language of India. Hindi script is Devanagari Script. No of the letters in Hindi is 44. But some authors say there are 52 letters. Tell me about your mother tongue also venu.
Venu: My mother tongue is Telugu. It is spoken mainly in Andhra Pradesh and Telangana. Telugu has 56 letters. Telugu has more letters in its alphabet than any other Indian language.
Nihal: Oh, great. OK. Bye Venu. My friends are calling me. We will meet again. Bye.

Question 2.
Meet the heads of different religions. Collect the theme and practices of the particular religion. Discuss in the classroom. (Textbook Page No. 126)
Answer:
Hinduism: According to Hinduism the proper goals or main aims of human life is Dharma, Artha, Kama, Moksha.
Islam: Belief in Allah, belief in the prophets, belief in the last day, that there is judgment.
Christianity: The central tenet of Christianity is the belief in Jesus as the son of God and Messiah.
Buddhism: Buddhism encourages its people to avoid self-indulgence but also self-denial.
Jainism: The central theme of Jainism considers religion as a science of ethical practice.
Sikhism: The emphasis is on moral actions, noble living, and working for the welfare of all the people.

Question 1.
There are many languages in India. What is the need for a language? How did the languages evolve? (Textbook Page No. 124)
Answer:
Language is a medium of communication. With the help of language, we can communicate. Man is the only living being on the earth who uses language. Learning became easier with the evolution of language. In the olden days, people drawn pictures to communicate. They wrote on clothes, leaves, etc. After that, they developed a script. Like this languages evolved.

Question 2.
Try to read the inscription of Krishnadevaraya 1516. Take the help of your teacher to understand this inscription. (Textbook Page No. 125)

Question 3.
Discuss some customs and traditions of our ancestors which help to protect our health and hygiene. (Textbook Page No. 127)
Answer:

These customs and traditions of our ancestors help, us to protect our health and hygiene in these days also.

Question 4.
Prepare and enact a role play on communal harmony in your school function. (Textbook Page No. 132)
Answer:

Question 1.
How was the script developed? (Textbook Page No. 124)
Answer:
People wrote on clothes, leaves, barks, etc. in the olden days. They used pins to write on the dried leaves. Initially, they drew pictures and symbols. Gradually the script developed.