Question 1.
What did the mother do to make Madananka normal and settled in life?
Answer:
Madananka’s mother hoped that he would become normal and settle down if he was married. So, she got him married to a girl.

Question 2.
What kind of man was Yakshadatta?
Answer:
Yakshadatta was a well-to-do merchant. He lent money to the poor but capable persons. He was an intelligent person.

Question 3.
What did Ratnanka do with the dead rat?
Answer:
Ratnanka made a cup out of a leaf and placed the dead rat in that cup. He carried it through streets crying, A rat for sale !” A merchant purchased that dead rat for feeding his cat and gave him a handful of bengalgram.

Question 4.
How did the firewood which Ratnanka had collected fetch him a hundred gold coins?
Answer:
Ratnanka had collected the firewood from the woodcutters by offering each of them some soaked bengalgram and cold water. Ratnanka sold the firewood away for two rupees in the city. He gave one rupee to his grandmother towards savings and purchased a Kuncham of bengalgram with the other rupee. Out of this he soaked one kilo everyday and sat under the same tree with cold water. He collected many cart-loads of fuel within a month and sold it when there was a scarcity of firewood in the city. Thus the firewood fetched him a hundred gold coins.

Question 6.
How did Ratnanka help the woodcutters?
Answer:
Ratnanka offered each thirsty wood cutter some soaked bengalgram and cold water. The hungry and thirsty woodcutters were pleased with Ratnanka’s service.

Read the biographical write up on Dr. Kotnis again and write the timeline of the events referred to, in your notebook. A few events are shown here.
1. 1910 – Kotnis was born
………..
2. 1938 – Chinese Government built a memorial hall for Dr. Kotnis
Answer: 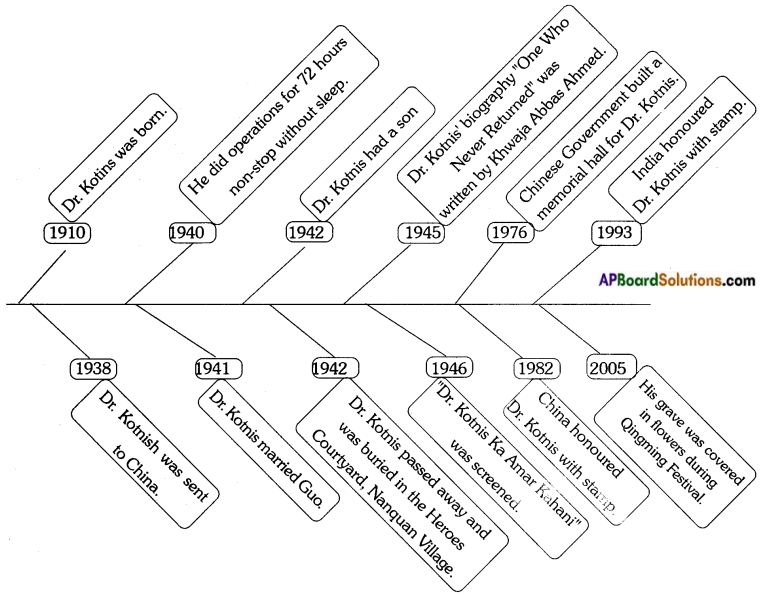 There are many old age homes in our society. Visit any one of them and interview any two persons.
Before you conduct an interview, prepare a questionnaire centred around the following items.
1. Name
2. Age
3. Gender
4. Social background
5. Reasons for coming to the old age home
6. Food served
7. Opinion about old age home
8. Other care
9. Improvements suggested
Write a report based on the interview and present it before the class.
Answer: 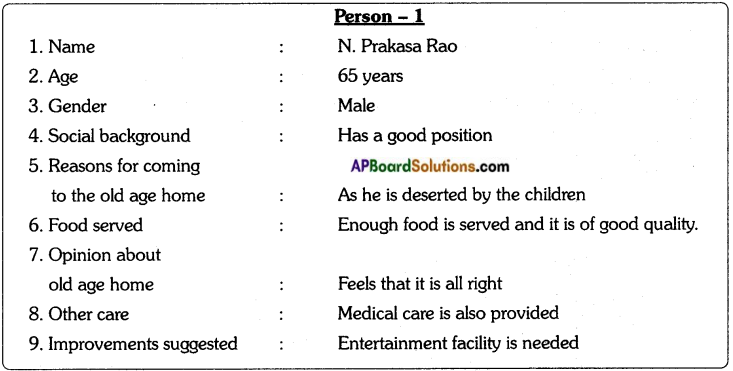 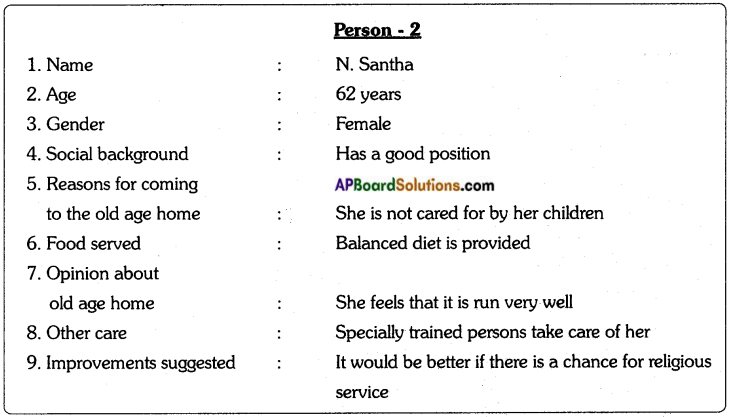 Report:
N. Prakasa Rao, a senior citizen, is a 65 year old person. Though he has a good position in the society, he has come to old age home as he is deserted by his children. He is very much satisfied with the conditions of the old age home. He feels that proper medical facility is also available there. He wants to have some kind of entertainment facility. N. Santha is a 62 year old senior citizen. Though she has been enjoying a good position in the society, she has come to the old age as she is neglected by her children. She feels that the balanced and healthy diet is served there. She feels that it is run very well and she is very happy with the services provided by specially trained persons. She opines that if there is a chance for religious service it would be a lot better.
The main reason for the alienation of the old people is that the young people don’t show them any love and affection. They forget the sacrifices made by their parents and desert them. They don’t care for them. So, the young persons should change their attitude. They should know the importance of human relations and values. They should prevent their parents from going to old age homes by showing them love and affection.

The Dead Rat Summary in English

Madananka was a young merchant living in Ujjain. As he lost his father, his mother brought him up with great affection and love. Unfortunately, he turned out to be a vagabond. Hoping he would become normal and settle down, his mother got him married to a girl but he became worse. One day he left his house deserting his mother and pregnant wife. His wife gave birth to a son and he was named Ratnanka. He too was brought up with affection and care and given good education. When he was ten, his grandmother told him to take up some business to earn their living. She advised him to go to Yakshadatta and borrow some money from him. Yakshadatta, a well-to-do merchant living in the neighbouring village, lent money to the poor but capable persons. Ratnanka met Yakshadatta and requested him to lend him some money for business. He promised Yakshadatta that he would repay the amount soon. Yakshadatta pointed towards a dead rat and told Ratnanka that it was the capital he could lend him. He also told that an intelligent man could earn millions with that dead rat. Ratnanka took the dead rat and kept it in a cup made out of a leaf. A merchant purchased it for feeding his cat and gave him a handful of bengalgram. Ratnanka took the bengalgram home and soaked it. Then he added some salt and pepper to the bengalgram. He offered some soaked bengalgram and cold water to the hungry and thirsty woodcutters. They were pleased with his service and gave him two pieces of firewood each. Ratnanka sold the firewood away for two rupees in the city. He gave one rupee to his grandmother towards savings and purchased bengalgram with the other rupee. Again he offered soaked bengalgram and cold water to the woodcutters. In this way he collected many cart-loads of fuel within a month. When there was scarcity of firewood in the city, he sold the firewood and earned a hundred gold coins. He became one of the leading merchants in that city within two years. Then he wanted to show his gratitude to Yakshadatta. He got a rat made of gold and carried it in a procession to the residence of Yakshadatta. Ratnanka told Yakshadatta his success story and requested him to accept the golden rat as repayment of the loan and also as a token of his gratitude. Yakshadatta was pleased with the intelligence and gratitude of Ratnanka.

vagabond (n): a person who has no home and usually no job, and who travels from a particular place

abscond (v): escape; or to go away suddenly and secretly in order to escape from somewhere

menace (v): something that is likely to cause harm

approached (v): went near to somebody

deserted (v): left somebody without help or support

capital (n): a large amount of money that is invested or is used to start a business