Question 3.
Multiple Choice Questions:
i) Which one of the following is less polluting fuel?
a) Natural Gas
b) Coal
c) Kerosene
d) Petrol
Answer:
ii) a

ii) The main constituent of coal is
a) Carbon
b) Oxygen
c) Air
d) Water
Answer:
iii) b

iii) Which one of the following material is used for making shoe polish?
a) Paraffin wax
b) Petrol
c) Diesel
d) Lubricating oil
Answer:
i) a

Question 4.
Fill in the blanks.
i) …………… was used in manufacture of steel. (Coke)
ii) The biproduct of coal used in synthetic dyes and paints is ………………. (coal tar)
iii) Coal was formed in areas where large amounts of ………………. was buried under the earth. (forests)
iv) ………………… gas which causes climate change and global warming. (Carbon dioxide)

Question 6.
Explain the process of formation of petroleum in Earth. (OR)
Explain the process of formation of petroleum in the Earth.
Answer:
Petroleum was formed from the remains of tiny organisms called plankton that were found in the bottom of seas and oceans. Plankton have tiny droplets of oil inside their bodies.
As these organisms died, their bodies settled at the bottom of the sea or ocean and got covered with layers of sand and clay. Over millions of years, due to absence of air, high temperature and high pressure these dead organisms transformed into petroleum.

Question 7.
Project Work:
Compare a CNG run vehicle with that of a diesel run vehicle. What difference do you notice in both cases with respect to pollutants released, level of pollution and cost of fuel? Prepare a report on your findings. You can take the help of a driver to make a report on your observation.
Answer:

Question 8.
Project Work:
Choose five families of your neighbourhood, collect the information about the measures that they adopt to conserve energy resources in transport and cooking.
Make a report on your observation.
Answer:

The precautionary methods taken by them to conserve energy resources in transport and cooking.
In transport: 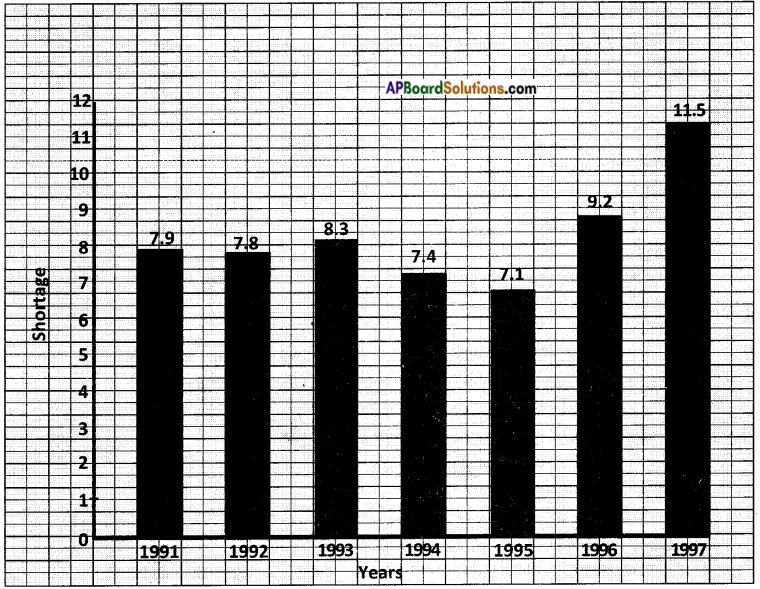 b) If shortage percentage of power increases year by year, how will it affect on human life? Explain.
Answer:
The effect of shortage percentage of power on human life:
Agriculture: Agriculture mainly depends on electric power for water supply. If there is no sufficient power is available then the yield of food material decreases.
Industry: Industries mainly run with electric power. If electric power is not sufficient then it is major set back for their production.
Economy: Economy drastically affected by shortage of power which will also effects the economic status of people.
Health: Shortage of power also affects the health of people because many cured by operations which required power.
Science and Technology : The growth of science and technology completely get damage due to lack of power because they are mainly depend on power.
So shortage of power drastically affect human life.

Question 10.
Draw a flow chart showing exhaustible and inexhaustible resources and their use.
Answer: 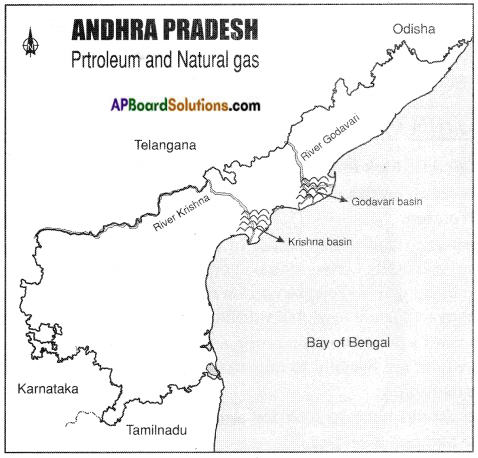 Question 12.
How do you appreciate the efforts of human beings to discover an alternate energy source like coal and petroleum for their daily use?
Answer:
Earlier people used kiln using wood for cooking food and for travelling they used horses and bullock carts. There was no electricity so their life was miserable. The wood they were using produced lot of pollution. So they required a fuel not only for cooking but also travelling long distances.
In 19th century the use of coal as fuel was the major thing in development of human beings. Steam engine which used coal was invented during industrial revolution. Later electricity was produced from coal. During this period the steam engine was used to power everything from cloth looms to vehicles on land and water.
The petroleum was started as fuel in 1859 then it was used everywhere in the world because it was better fuel than coal and less pollutant. So people were using petroleum products for their needs that is for cooking, transport and machinery, etc. So discovery of using coal and petroleum as fuel changes the life of human beings. So we should have to appreciate human being for their discovery of an alternative energy source like coal and petroleum for their daily use.

Question 14.
Why should people look for alternative sources of fossil fuel? (OR)
Write your opinion on the necessity of discovering an alternate energy sources to coal and petroleum.
Answer:
The entire research and development in the field of sourced energy shows that at present rate of use of the conventional energy sources like fossil fuels will not last for long and also burning fuels release carbon dioxide a green house gas, which causes a climate changes and leads to global warming.
Coal fired power plants emit mercury, selenium, arsenic, lead in addition to green house gases which are harmful to human health and environment and availability of coal decreasing rapidly.
So people should have to look for alternative sources of fossil fuels which are inexhaustible and pollution free.

Question 15.
Assume that you are a driver, what measures do you take to save petrol and diesel?
Answer:

Question 16.
“Crude oil and refined fuel when spills into the sea from tanker of ships by accident”. Discuss the consequences of this on environment.
Answer:
Crude oil and refined fuel spills into sea from tanker of ships by accident causes a damage to natural system and kill sea birds, mammals, shell fish and other organisms due to lack of dissolved oxygen in water as oil is less denser than water it floats on water and forming a layer called oil slink and oxygen does not enters into the water.

Question 1.
Identifying articles and materials used for various purposes.
Have a look at table. Column A gives the names of some activities and items. Ask your grandparents or other older people about the names of the materials then used for the items given in column A, and write them in column B. Then in column C, write the names of materials being used at present.
Answer: 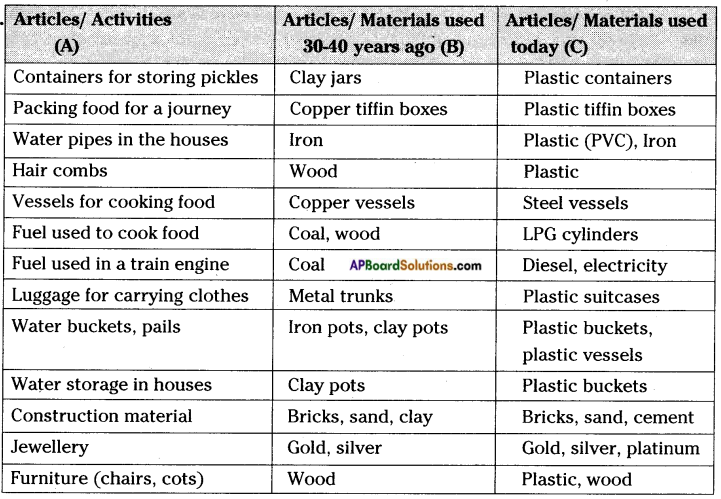 From activity 1, you have a long list of materials. Some of them like wood, metals (Iron, Silver, Gold etc) were used ten years, fifty years even hundred years ago. Do your grand parents remember using plastic when they were young?
Now think and wirte the answers:
a) How many of these materials were available 10 years ago?
Answer:
Plastic, iron, gold and silver articles were available 10 years ago.

Question 2.
List out the natural resources which are limited and which are abundant arid record in table.
Answer:

a) What will happen if fossil fuel like coal and petroleum are completely exhausted?
Answer:

c) Are the fossil fuel resources available plenty to meet the future energy needs?
Answer:
No, a survey gives an information that about 2015 the world people would consume half of total reserves of petroleum. Coal also exhaustible resource. We can meet our needs with coal for another 250 – 300 years at the current rate of use. 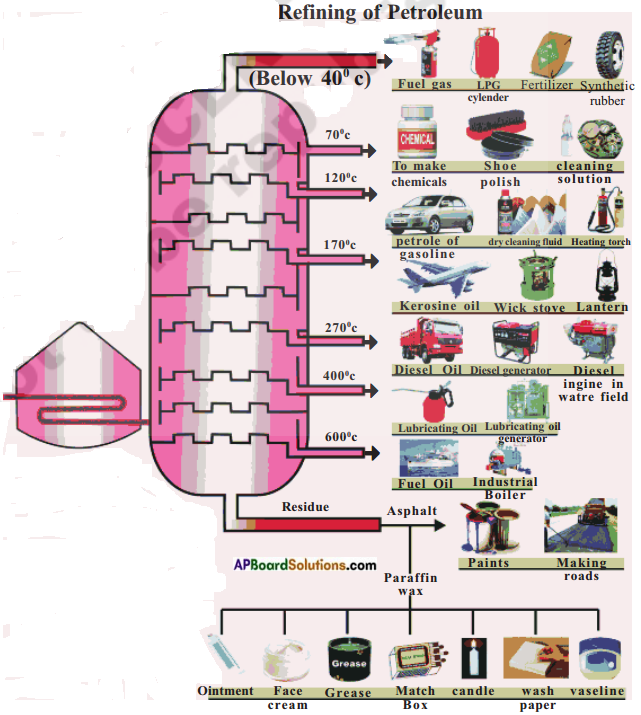 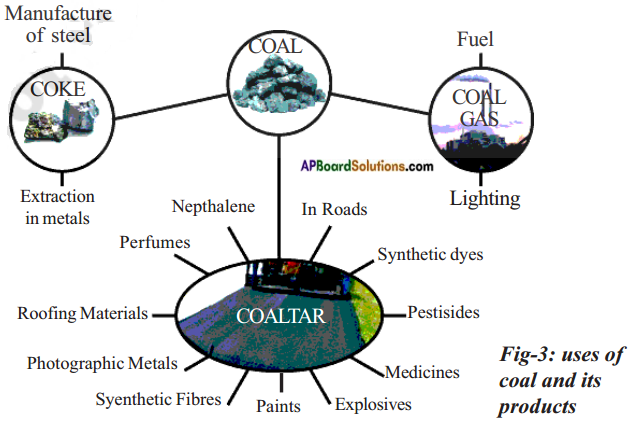 Observe the above picture and list out the uses of coal products in the following table. You can collect more information by the discussion with elders and with your friends.
Answer:

Conduct an experiment to show that when we heat high quality coal, a gas evolves which can be burnt. (OR)
What are the materials required to demonstrate “burning of coal”? Draw the diagram of the experimental setup. (OR)
How do you prove a high quality coal on heating produces a burning gas?
Answer:
Aim: To show that when we heat high quality of coal a gas evolves which can burn. Material required : Two boiling tubes, rubber corks, iron stands, delivery tube, jet tube, bunsen burner.
Procedure: Take a spoon of powdered coal into a hard boiling tube and fix it to a stand as shown in figure. Close the test tube with a rubber cork and connect it to another.
boiling tube which is partially filled with water and has fixed to other stand, with the help of ‘U’ shaped delivery tube. Arrange a jet tube to the cork of second boiling tube. Heat the boiling tube containing coal strongly with the help of bunsen burner. 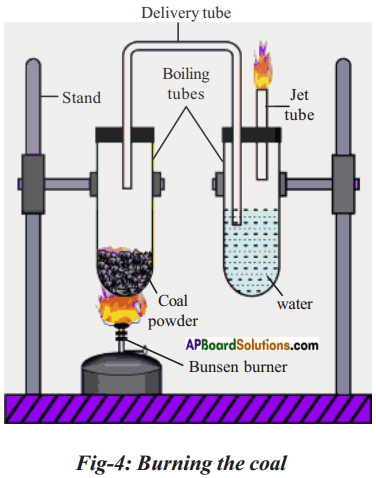 We may notice that brownish black vapours evolved in the first boiling tube. These vapours are passed through water in the second boiling tube. Colourless gas bubbles evolve from the water. If we burn the gas that is evolving through the jet tube we can witness a bright flame at the nozzle. This shows when we heat high quality coal a gas evolves which can burn.

Misuse of fuel in cooking:

Misuse of fuel in industries:

a) What are the consequences of misuse of fuels?
Answer:

b) What methods could you suggest to prevent the misuse of fuels?
Answer:
In transportation: