Question 1.
Write any three differences between drama and film.
Answer:

Question 3.
Some people argue “Cinema is a powerful tool to transform the society”. Others argue that “It has a negative impact”. Whom do you agree with and why?
Answer:
“I think that cinema is a powerful tool to transform the society with positive or negative impact”. Whatever may be the change, the cinemas have that power.
Reason:
The influence that the cinema exerts on the minds of those who visit it is at once beneficial and harmful.
The films shown in the cinema are often very instructive and informative. Almost every film shows something about the activities and customs of the people in other lands. By seeing such films, one learns a lot about human activities. One also gains a better understanding of people of the world.

Further, some films show the battles that were fought in the past. They also sometimes show very vividly how man has struggled through the centuries to remove discomfort from his life. In this way, some films have given many people an insight into the past. Even illiterate people have benefited from such films. What they cannot acquire from books owing to their inability to read, they can acquire from films. School students, too, often benefit from a visit to the cinema. What they see and hear in the cinema makes a better impression on their minds than only the spoken words of their teachers. For all these reasons, the cinema is often regarded as an important means of spreading knowledge.

It must be admitted, however, that some films have exerted an evil influence on many people. Films which show the activities of criminals have encouraged many youths to commit acts of crime. Other films, too, such as those dealing with sex and other natural weaknesses of man, have corrupted the morals of many people. As a result, the governments of many countries have been compelled to interfere in the display and production of certain films. Yet, the cinema continues to retain its popularity.

Question 4.
What were the major themes discussed in early films? How is it similar or different from the films you have seen?
Answer:
Similarities:

Question 5.
How did newspapers play a major role in the freedom movement?
Answer:
Role of Newspapers in Cultural Awakening and Freedom Movement
During the British period, Social reformers began actively campaigning for radical changes in the society. The reformation of Hinduism, the move for abolition of ‘Sat! and efforts to encourage widow re-marriage were some of the major reforms. Inspired by these great leaders, many newspapers were started in different parts of the country.
Many freedom fighters of Indian Independence were the editors of newspapers. Amrit Bazar Patrika (started in 1868) was edited by Sisir Kumar Ghosh, Bengalee (started in 1833) was edited by Surendranadh Banerjee, ‘The Hindu’ (started in 1878) was edited by G. Subramaniya Iyer, ‘Kesari’ (started in 1881) was edited by Balagangadhara Tilak.

The editors expressed their views through these newspapers. These papers played a prominent role in arousing national consciousness among Indians. The Krishna Patrika was edited by Mutnuri Krishna Rao. Nilagiripathrika, edited by S.V. Narasimha Rao of Nalgonda. Tenugu pathrika by Vaddiraju brothers from Inugurthi in Warangal. Golkonda, edited by Suravaram Pratapa Reddy. Urdu magazine Rayyat, edited by Mandumula Narasing Rao,
Mahatma Gandhi wrote profusely. He took over the ‘Young India’ in 1918 and started another journal ‘Navjeevan’ in Gujarati. He wrote extensively in ‘Harijan’ under the editorship of Mahadev Desai.
Thus the newspapers played an important role in Freedom movement.

Question 7.
What are the reasons for the disappearance of dramas now-a-days.
Answer:

Prepare the script for a drama. Perform the drama in your class. (Class Activity)
Answer:
” A woman, June, Screams! She is on the ground holding her feet. She shakes her leg and screens some more.
June: “AH!”
Hank runs out to see what’s wrong.
Hank: “What happened ?”
June: “I got strong by a bee …. on the foot”.
Hank: “Let me see”.
June flops down and holds up her foot.
Hank: “Okay, let me get the stinger out. I hear if you can get it out without squeezing the
little venom bag then it won’t hurt as much.
June: “Ow ! Ow ! Ow ! Get it out”.
June is shaking her foot.
Hank: Hold still: June tries to stop struggling.
Hank carefully gets it with one finger.
Hank: “There ”
June: “Still hurts”
She shakes her foot at him. Hank struggles and then holds her leg still again and looks.
Hank: “Look like there is a bit of stinger is there still.”
June: “Get it out”
Hank: “I’m going to need to tweezers or something”
June: “Get some tweezers”
Hank: “Okay Okay”.

Question 1.
What are differences in a stage play and a film? Make a comparative table. (Textbook Page No. 240)
Answer:
Similarities:

Differences:
Stage play: A stage play is performed live. There is the possibility that there will be mistakes during the performance. The actors have to project their voice and make their movements and facial expressions big and obvious enough for the audience to be able to hear/see them. The cast of a stage play will rehearse the show for months before the first performance and the performance dates can go on for months as well. Auditions for a role in stage play usually only take a couple of weeks.

Film: A film is recorded. You are allowed to make some mistakes because you can just start over and film it again. The actors have to be realistic and believable. The cast of a film will usually only have several minutes to rehearse the scene before filming it, and this applies to each scene filmed. It can take a few weeks just to film on scene. Filming can take as long as a month to a year or more. Auditions for a role in a film can take months.

Question 2.
With the help of your teacher, discuss the changes in the livelihood opportunities from play to films. (Textbook Page No. 240)
Answer:
The persons who have good voice were encouraged as stage artists. But in films, their physical beauty was also taken for consideration. The stage artists made a beeline to the studios for a chance in films. Those who have chances in this field are settled well. Some have lost their wealth also.

Question 3.
Bring to the classroom various newspapers available in your area. Form as many teams. Now analyse the papers for the way the news is organised. (Textbook Page No. 244)
Answer:
In our village we receive two papers – Eenadu and Sakshi dailies.
In my class we form as two teams.

Question 4.
Form two groups and have a debate on pros and cons of fan clubs. (Textbook Page No. 242)
Answer:
Pros: They praise their artists. They give free advertisement for their pictures. They support the film for 100 days functions. In addition to this, they conduct social service activities on the name of organization.
e.g.: Blood donation camps, Eye camps etc.
Cons: There will be severe competition between these organisations. Sometimes they give wrong statements about the picture. These opinions discourage the cine fans.

Question 5.
Ask your parents about the plays they had seen during their childhood. (Textbook Page No. 239)
Answer:
Bhuvana Vijayam, Chintamani, Kanyashulkam, Rakta Kanneeru etc., are the most popular plays in those days.

Question 6.
What changes have occurred in drama over the period? (Textbook Page No. 239)
Answer:
In those days there were the dramas of epic stories. Nowadays social dramas are popular. The stage decoration is also changed. Now it is in modern ways. The artists were selected on the basis of voice and its modulation, but now it is based on physique and other things. Mikes are also useful to those who have small voices. But there is no encouragement for these dramas.

Question 7.
Make a mime presentation of five minutes and a play for five minutes. Compare the ease of performance, the themes that can be presented and the communication to the audience. (Textbook Page No. 240)
Answer:
Students should present the activity.
Comparison:

Question 8.
Make a list of sources of entertainment in your village or town. How will you assess their popularity? What changes are occurring over time? (Textbook Page No. 241)
Answer:
There are cinema halls, ‘Kshethrayya Kalakshetram’, Sibar Disney Land and Rajiv Gandhi Park in our city. Out of these cinema halls are always full. Kalakshetram is popular for dramas and other stage programmes. Many people visit Hailand, Disneyland. Rajiv Gandhi Park on Sundays, holidays and summer weekends.
Nowadays people are very crazy about TVs and Cricket Matches. Elders in the families and girls are watching TVs, boys are interested in cricket.

Question 9.
Select some popular TV channels. Form a team of 4 to 5 children. Each team should assess the proportion of time allocated by a channel to various themes like religion, News, films, serials, etc. Share your findings with other teams in the class. (Textbook Page No. 241)
Answer:
Group – A:
Selected: ETV Channel.
The following ETV channel allocated the proportion of time to various programmes.

Group – B:
Selected: Maa TV Channel.
Hence there is variation in programmes of various channels selected by different groups.

Question 12.
Analyse the latest movie that you saw for its content and influence on children like you. (Textbook Page No. 243)
Answer:
Sreemanthudu was the latest movie which I saw. In this picture hero was much interested in rural development programme. In order to develop a village he adopts the whole village. In this regard he faces some consequences with villains and finally he implements some programmes for the development of the village people. This movie mobilises each and every person towards development, of the society.

Question 13.
Make a list of movies that various students in the class have seen during the month.
Rank them on a scale of 0 to 5 for violence; where 5 is for films with no violence and f for films with repulsive violence. (Student Activity) (Textbook Page No. 243)
Answer:

Question 14.
Collect one week issues of the (Eenadu, Sakshi) newspapers. In the above teams make a list of special features and the days on which they appear and present it to the class. Give your reasons why such features are published by the newspaper. (Textbook Page No. 244)
Answer:
I divided my class into three different, groups and given work to all of them to gather information on what issues are presented from one week onwards.

First group: Read Eenadu.
In this newspaper they mention about burning topic of construction of dams. Why the newspapers are presented that issues means, to explain the people what programmes are implemented by the government and how far they are completed and reached to people.

Second group: Andhra Jyothi newspaper they mentioned about A.P special status issue in the Parliament.
In this newspaper they are presenting what are the demands of A.P people and how far central government fulfill these. Due to this people known about what’s going on in our country and state.

Third group: The Hindu newspaper.
It is publishing the news about NEET Exam.
Because lakhs of science students are waiting for what judgement is going to be given by Supreme Court. Is it beneficial to them or not?
Like this, the newspapers are presenting the burning issues and brought to the common people to know what’s going on in our country And made them to alert about their future.

Question 15.
There are also journals on various purposes. Collect a cover page of old issues of various magazines available in your village/ town and classify them according to the subject. Are there any other ways of classifying these journals? (Textbook Page No. 244)
Answer: 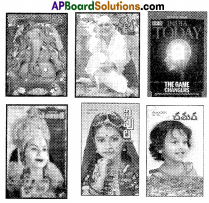 Many magazines are there like this.
These can be classified in many ways like periodicity, subjects, language etc.