Question 2.
Name the two rivers which joined into the Bay of Bengal?
Answer:
The Krishna, The Godavari, The Cauvery, The Penna, The Mahanadi, etc.

Question 7.
Study the map given below and answer the following questions. 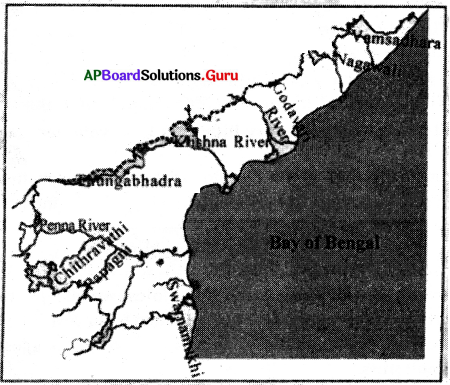 Question 8.
Explain the process of evaporation. How does evaporation help in the formation of rain?
Answer:

Question 9.
Read the table and answer the following questions.

a) The Tungabadra river is a tributary of which river system?
Answer:
Krishna River system.

b) Among the above river systems, which one belongs to North India?
Answer:
The Ganges.

c) Which river originates from the Himalayas?
Answer:
The Ganges.

Question 10.
Observe the given below table and answer the following questions.

Question 13.
From which direction does the wind blow during the rainy season?
Answer:
The winds come all the way from the Arabian Sea and the Bay of Bengal and they transport the rainy clouds. They are called ‘Monsoon winds’. They are also called ‘South-West Monsoon winds’ as they blow from that direction. These winds blow only in the summer.
There are two arms of the monsoon winds: one blows from the Arabian Sea and the other from the Bay of Bengal, The direction of the winds reverse in the months after October as the winds begin to blow from the Bay of Bengal South-Westwards. This causes heavy rains in October – December months in coastal Andhra Pradesh and moderate rains in Rayalaseema and Telangana districts.

Question 14.
Define Precipitation and Humidity.
Answer:
Precipitation: Different forms of condensation of water vapour is known as precipitation. This may take place in the form of dew, fog, rain, snow, and hail, etc.
Humidity: The amount of invisible water vapour present in the atmosphere is known as humidity. When temperature and humidity are high, we feel uncomfortable. We perspire and the sweat does not evaporate quickly. We feel sticky and such weather is called sultry.

Question 16.
In what way have the floods affected the villages, agricultural fields and trees?
Answer:
Floods have become a major problem in our country in recent years. Some part of the country or the other is flooded every year during the rainy season.

Question 17.
How can people meet the challenge of disasters like cyclones and floods? (or)
Explain how people can be prepared to meet the challenges of disasters like cyclones and floods. (or)
Read the following paragraph and answer the question.
The immediate damage of the cyclones is also heavy like loss of lives, crops, houses etc, more importantly, they also cause long term damages. For example, the life savings of most of the poor stored in the houses in the form of food, tools, cattle, small shops, vehicles, boats, nets, etc., are destroyed, Many families may lose their working members. Farmers too not only face loss of crops but also permanent damage to their lands.
Q. Interpretation of the devices, suggestions that you can give during cyclone times to the Government.
Answer:
This can be done through long term planning by governments and close cooperation between the people and government agencies. Today, with the installation of early warning systems by the government, it is possible to predict the possibilities of natural disasters like cyclones and floods. Governments thus put in place these systems and inform people about the possibility of disasters.
Governments are also responsible for providing for the long-term security of all people by building strong roads which are not easily destroyed, safe pucca houses for those living in vulnerable areas like sea coast or along the rivers or in low lands. Food, water and medical emergency teams should be kept ready whenever there is a forecast of cyclones.

Question 18.
Can forest and vegetation help in reducing droughts?
Answer:
Yes. The vegetation and forest can help the rainwater to percolate into the soil. By using this percolated water, they can give us some food during droughts. These also reduce soil erosion and its fertility. This helps the cattle during droughts.

Question 19.
What do you think is the direction of slope in Andhra Pradesh – from North to South or East to West or West to East?
Answer:
West to East.

Question 20.
Have you ever observed dew? Where is it formed?
Answer:
Yes, I have observed dew during mornings and evenings on car roofs, grass leaves, and railings etc.

Question 21.
In which part of the day will you find fog?
Answer:
In morning.

Question 22.
In which season do you have more foggy days?
Answer:
In winter.

Question 23.
Have you ever seen snowfall? How is it different from rainfall?
Answer:
Yes. Rainfall is a liquid state of matter whereas snowfall is a fall of snow.

Question 25.
Study the following figure and answer the questions. 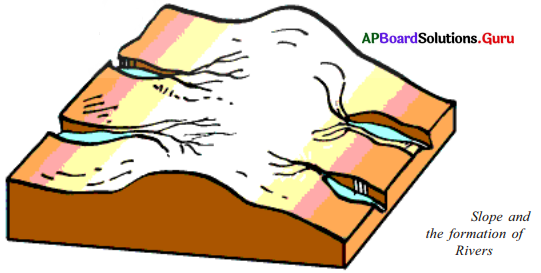 c. In what way have the floods affected the villages, agricultural fields and trees?
Answer:
Refer Q.No. 6 under the section ‘Conceptual Understanding’. 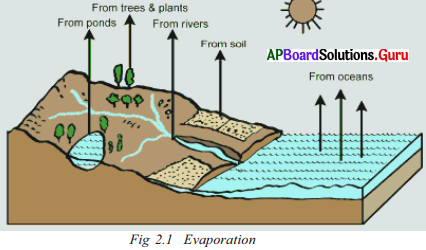 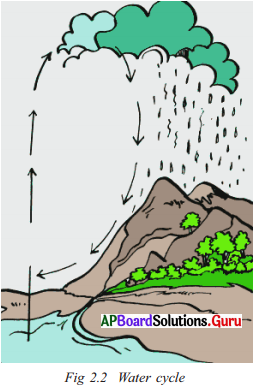 Answer the following questions.
Define the water cycle.
Answer:
The cycle of water evaporating from the seas, becoming clouds in the sky, coming down as rain and flowing down the slope on the land in the form of rivers and finally joining the sea again is called the water cycle.

b. Name some water bodies.
Answer:
There are several water bodies on the earth’s surface – oceans, rivers, lakes, etc.

c. Where do you think maximum evaporation would take place-from plants, rivers, oceans or soils?
Answer:
From oceans.

e. Can you say what is the first stage of the water cycle?
Answer:
The cycle of water evaporating from the seas becoming clouds in the sky.

f. Look at the diagram and make a list of all places from which evaporation takes place.
Answer:
Ponds, trees, rivers, soil and oceans.

Question 28.
Can forests and vegetation help in reducing droughts?
Answer:

Question 29.
Explain about the flood – plain of the river.
Answer:

Question 30.
What were the destructive cyclones mentioned in the lesson? Explain them.
Answer:
Our state has a long coastline and is frequently faced with very destructive cyclones. When heavy winds blow from the sea, heavy rains lash the lands, and high waves make the sea very unsafe. These usually occur between June and December. The worst cyclone hit the state in November 1977, perhaps, the worst cyclonic storm to hit the Indian shores. Six-metre high tidal waves swept across villages in coastal Andhra Pradesh, killing 9941 people. At least 100 villages were washed away by the cyclonic storms and the ensuing floods. Seen from the air, it seemed like a sheet of water drawn over the affected areas floating in the swirling waters. About 100 people who left their homes to seek shelter in a building in Bapatla town died when the building collapsed. Most lives were lost in Diviseema, Krishna District. Recently in 2014 “Hud Hud” cyclone created huge destruction in Vishakapatnam.

Question 32.
Locate the following on the map of Andhra Pradesh. 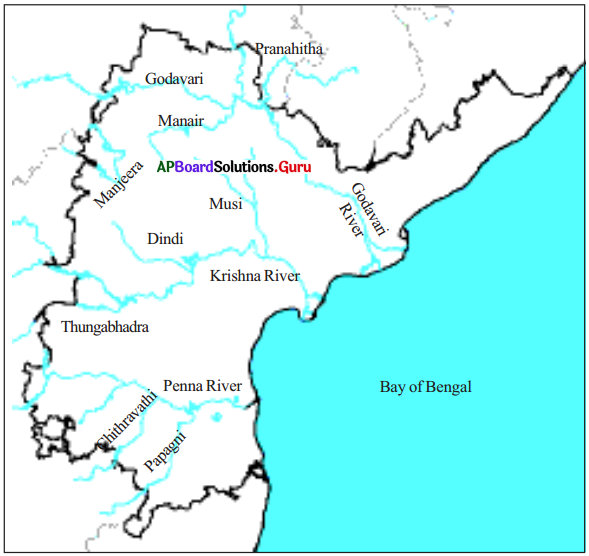 Question 33.
Look at the map given below showing rainfall received in different parts of Andhra Pradesh. 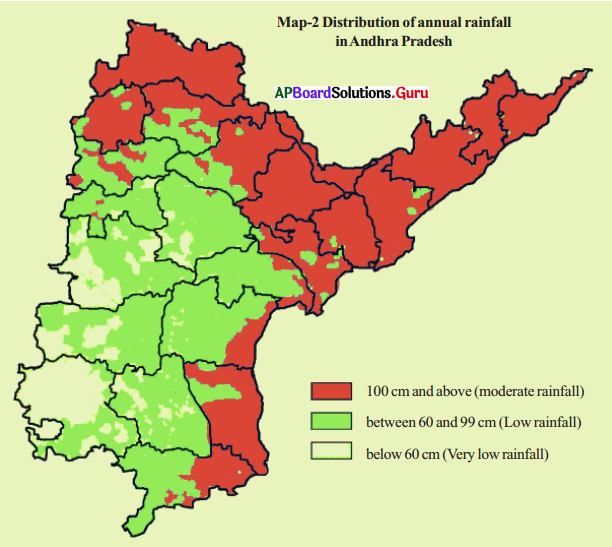 i) Does your district receive high rainfall or moderate rainfall or low rainfall?
Answer:
Our district is It is and receives rainfall. (Self exercise)

iii) Make some more questions and ask each other.
a. Does Chittoor district receive high rainfall?
Answer:
No, it receives low rainfall (between 60 cms to 99 cms. )

c) First, create rough outlines of India in a notebook; then draw the Western Ghats and the Eastern Ghats; After that, roughly mark the areas that are in Rayalaseema and Kostha; Finally, label them with months in which it rains.
Answer:
Student’s activity. 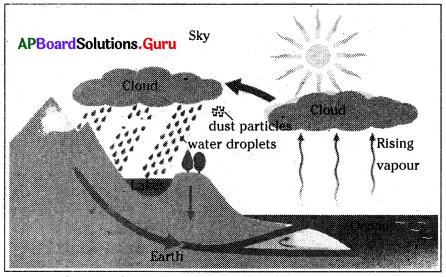 Question 36.
Observe the following map and answer the questions. 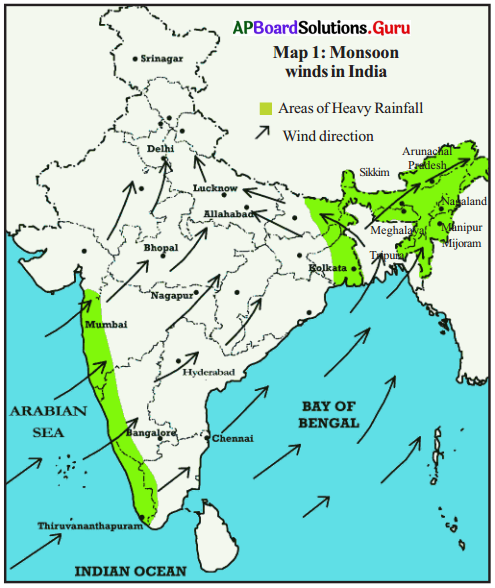 1. Towards which parts of the country will the winds take the clouds on the Bay of Bengal?
Answer:
North-East parts.

2. Towards which parts of the country will the winds take the clouds on the Arabian Sea?
Answer:
South/West/East/North.

3. From which direction will the winds blow to bring monsoon rains to West Bengal, Lucknow and Delhi?
Answer:
North-East.

4. From which direction will the winds blow to bring monsoon rains to Mumbai, Hyderabad, Bangalore?
Answer:
South-West.

Question 37.
Look at the map and answer the questions. 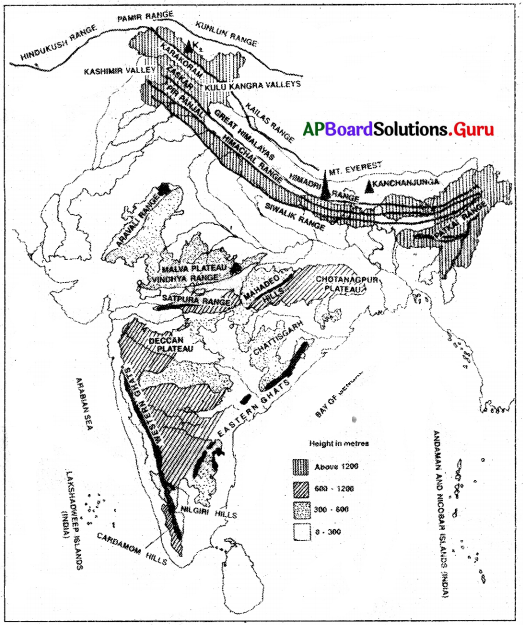 a. Look at the given physical map of India and identify Western Ghats, Eastern Ghats.
Answer:
Self Exercise.

b. In which direction of Andhra Pradesh are the Western Ghats?
Answer:
Westside.

c. Now create rough outlines of India in a notebook – then draw imaginary hills, along ‘The Western Ghats’, Eastern Ghats. Roughly mark the areas that are in Rayalaseema and Telangana. And label them with months in which it rains.
Answer:
Self exercise.

Question 36.
Look at the map and prepare a list of rivers that rise from/flow through.
Answer:

Question 38.
In which months of the year does it rain most in your place? List three rainiest months.
Answer:
June, July and Aug.

Question 40.
Do you have ‘normal’ rainfall every year in your place or does it vary every year?
Answer:
It varies every year.

Question 43.
Define water cycle and evaporation.
Answer:
a) Water cycle: The process of water evaporating from the seas, forming clouds in the sky, coming down as rain and flowing down the slopes on land in the form of rivers and finally joining the sea is called the water cycle.
b) Evaporation: The change of water into vapour is known as evaporation. The process in which water vapour changes into water is called condensation. Clouds are tiny droplets of water hanging in the air above.