Question 1.
Write any two innovations which led to the industrial revolution in Europe.
Answer:

Question 2.
Development and expansion of industries lead to a gradual increase in people to Urban areas. Comment on consequences of Urbanisation.
Answer:
Due to this

Question 4.
“Major changes swept industries with the coming of machines, Machines could be worked by even unskilled persons. Thus, skilled artisans were no longer required. In their place, a large number of women and children were employed and made to work for meager wages.”
Discuss the hardships faced by women and child laborers during the industrial revolution.
Answer:

Question 5.
If Pravallika argues “Railways in India were built for the benefits of the colonial rulers”. Express your opinion about this argument.
Answer:
No. It is not true. The English built railways not only for the benefit of Indian people but to transport raw material to Indian ports and manufactured goods of England from Indian ports into the country. To transport cheap labour from villages to cities, and to transport their troops fast and easily to the nooks and corners of the country to link up all their trading centers in all parts of the country British established railways in India.

Question 6.
However, as times changed, European countries began to useless and less of their own mineral resources and relied on imports from other countries. The old mining towns and factories were closed down and new factories grew in new areas.
Question: “Due to the Industrial revolution Europe has become a developed continent. Write your comment.
Answer:

Question 7.
In the 19th century, the industrial workers of Europe had to face several hardships.
Let us read about the experiences of a child employed in an English coal mine.
“I have been working in these mines since I was four. Workers hew coal with pickaxes and fill the large wagons with it. Our job is to push these loaded wagons to the point from where horses or mules can haul them. This is a very difficult job. Hauling the loaded wagons through water and slush, and over very steep slopes, leaves us very tired. We have to work in this way for more than 12 hours a day. By the time we return home, we are so tired that we don’t even feel like eating. Yesterday, I fell asleep on my way home. My mother searched for me and carried me home.
Q. Comment on the need for the complete removal of child labour from our society.
Answer:

Question 8.
When did the factory system of production emerge? How?
Answer:

Question 9.
What is meant by Revolution?
Answer:
Revolution means, to bring a fundamental change or transformation of the existing practice. Revolution also means a transformation of ideas, thoughts, and practices of the people. Without revolution or changes, society and its structure remain static.

Question 10.
What is meant by Industrial Revolution?
Answer:

Question 12.
Who was employed to work on machines?
Answer:
Machines could be worked by even unskilled persons. Thus skilled artisans are no longer required. In their place, a large number of women and children were employed and made to work for meager wages.

Question 13.
Compare the conditions of workers of a leather tannery and the English workers 150 years ago and find out similarities and differences.
Answer:

Question 14.
What is meant by Proto – industrialization?
Answer:

Question 15.
How did the need for self-driven machines emerge in England?
Answer:
As the demand for cloth, and other handicrafts increased many times, many artisans could not increase the production to cope with the demand. In addition to that cloth made on looms by the artisans was very much expensive. If there were machines that could spin yarn faster and wave cloth faster, the cloth could be produced at a lower price. As a result of the pressure of trade and work, several people attempted making self-driven machines in England.

Question 16.
Explain the Transport Revolution caused by the invention of the Steam Engine.
Answer:
The invention of the steam engine boosted the shipping industry. It also reduced the cost of transportation by one-third of the cost of road transport. Yet people looked for better ways of transportation. The next big thing in the context of transport was the adaptation of steam engines to locomotives. George Stephenson’s locomotive pulled heavy loads along a 64-kilometer track from Liverpool to Manchester at 46-kilometer speed in an hour.
In the 1840s, John Loudon Me Adam devised a method of laying roads using broken stones. This created a hard surface which was an important advancement in road construction. Within another decade bitumen-based binding which we see in our areas as tar(mac) roads were built. This was further followed by the use of motor cars.

Question 17.
Read the following passage and answer the questions.
During 1750 – 1850, a new system called the ‘factory system’ emerged. In the place of simple tools and manual power, new machines and steam power came to be increasingly used. Production was now carried on in a place called ‘factory’, unlike what we read earlier where production was happening in homes. Hundreds of workers were brought together to work in these large factories. Machines became important in place of minor tools and handlooms. They produced goods on a very large scale.
1. When did the new system emerge?
Answer:
During 1750 – 1850 a new system emerged which is called the ‘factory system’.

2. What is meant by the factory?
Answer:
A place where production was carried on is called a factory.

3. Which became important in place of minor tools?
Answer:
Machines

4. How did they produce goods?
Answer:
They produced goods on a large scale.

Question 18.
“Industrial revolution led to increasing of urban slums in towns and life in slums became common scenario.” Explain it. (OR)
What are the problems faced by the people living in the urban slums?
(OR)
Which type of problems are the people who reside in urban slums facing today?
Answer:

Question 19.
What are the sources of energy needed to run machines?
Answer:

Question 20.
Do you know any factories nearby?
Compare the conditions of work of that factory with that of English factories 150 years ago.
Answer:
Yes. I know many factories nearby. There is a spinning mill in our area.
150 years ago i.e., in the nineteenth century the industrial workers of Europe had to face several hardships. The early factories were dreadful places of work.

Question 21.
Locate the following on the world map. 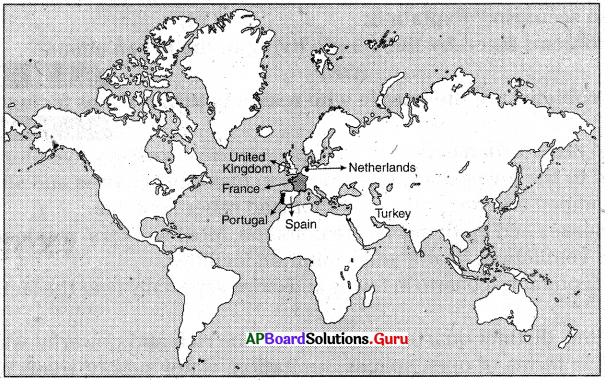 Question 22.
Do you think the arrangement between a scientist-inventor and a capitalist is fair? Give reasons.
Answer:
Yes. It was an agreement. The capitalist Boulton invested the necessary money and also paid Watt a salary. Watt made the steam engine. They made an agreement between them to share profit, two-third to Boulton’s and one-third to Watt’s. These two persons made a large number of steam engines, sold them, and made huge profits.