→ The human eye uses light and enables us to see the object. It has a lens in its structure.

→ The eye is a natural optical device using which a human being could see objects around him. It forms an inverted, real image on a light-sensitive surface called the retina.

→ The minimum distance at which objects can be seen most distinctly without strain is called the least distance of distinct vision (or) distance of clear vision.

→ The range of vision of human beings is 25 cm to infinity.

→ The minimum distance between the objects and the eye so that a clear image is formed on the retina is called the least distance for clear vision or near the point of the eye. This distance is 25 cm for the human eye.

→ There are 125 million cells – rods and cones. The cells generate signals which are transmitted to the brain through the optical nerves.

→ The retina is the light-sensitive surface of the eye in which an image is formed. It is equivalent to the photographic film in a camera. It contains rods and cones.

→ The ability of the ciliary muscles to adjust the curvature and thereby the focal length to get a clear view of objects is called accommodation.

→ The maximum distance between the objects and the eye so that a clear image is formed on the retina is called the near the point of the eye also.

→ The maximum angle, at which we are able to see the whole object is called the angle of vision.

→ The angle of vision for a healthy human being is about 60°. It varies from person to person and with age.

→ The value of the minimum distance of clear vision is about 25 cm.

→ The eyeball is nearly spherical in shape.

→ The farthest point up to which the eye can see objects clearly is called the far point of the eye. For a normal eye, it is infinity.

→ The maximum variation in the power of the lens so that, the far-off and nearby objects are viewed is called the power of accommodation. For a person having normal vision, it is about 4 diopters.

→ The time for which the impression or sensation (of an object) continues in the eye is called the persistence of vision. It is about \(\frac{1}{16}\)th part of a second.

→ The motion picture is done to create a clear impression of an event. The event is projected at the rate of 24 frames per second.

→ Cones with specific colours are in the retina. If some cones are absent, the distinction of colours is not possible. In such a case, the process is said to be colour blind.

→ Some persons have difficulty seeing the objects in dim light during the night. This defect of the eye is called night blindness.

→ Myopia (or) nearsightedness is caused by

It can be corrected by using spectacles with a concave lens of suitable focal length.

→ Hypermetropia is caused by

It is corrected by using spectacles made from convex lenses of suitable focal lengths.

→ Most of the old persons suffer from long-sightedness. In this defect, the power of accommodation of the eye decreases with ageing.

→ The phenomenon of the splitting of white light into component colours when passing through a glass prism is called dispersion of light.

→ The band of colour components of a light beam obtained on a white screen when white light passes through a prism is called the spectrum.

→ A rainbow is a natural spectrum of sunlight in the form of bows appearing in the sky when the sun shines on raindrops after the rain. The raindrops act like small prisms.

→ Scattering of light is a phenomenon of change in the direction of light on striking a particle like an atom, a molecule, dust particles, water droplets, etc. It explains phenomenon like ‘blue colour of the sky’ the reddening of the sun at sunrise and sunset, etc.

→ The bending of light passing through the earth’s atmosphere is called atmospheric refraction.

→ As we move about the surface of the earth, the density of air goes on decreasing.

→ Light travels from rarer to denser medium. Rays always bend towards the normal.

→ Sun appears to rise two minutes earlier and two minutes later due to the atmospheric refraction.

→ The scattering of longer wavelengths of light increases as the size of the particles increases.

→ Sir C.V. Raman explained the phenomenon of scattering in gases and liquids.

→ By using the Raman effect scientists determine the shapes of the molecules.

→ Myopia: it is the defect of the people who cannot see objects at a long distance is called Myopia.

→ Presbyopia: It is a vision defect when the ability of accommodation of the eye usually decreases with ageing.

→ Prism: A block of glass or other transparent material usually having triangular bases. Prisms have several uses in optical systems.
(OR)
A polyhedron with two parallel congruent polygons as bases and parallelograms for all other faces. A triangular prism has triangular bases.

→ Dispersion: The splitting of white light into colours (VIBGYOR) when it passes through prism ¡s called dispersion.

→ Scattering: Atoms or molecules which are exposed to light absorb light energy and radiate some part of the light energy in different directions. This process is called scattering.

→ Luminous body: The bodies which emit light and act as a source of light.

→ Focal length (f): The distance between the pole of the mirror and principal focus.

→ Refraction: Bending of light rays at the refracting surface when the light travels from one medium to other.

→ Non-luminous object: An object that does not give out light of its own.

→ Transparent: A material that allows the light falling on it to pass through.

→ Translucent: A material that allows only some of the light falling on it to pass through.

→ Opaque: A material Ch dc not allow any light to pass through It. 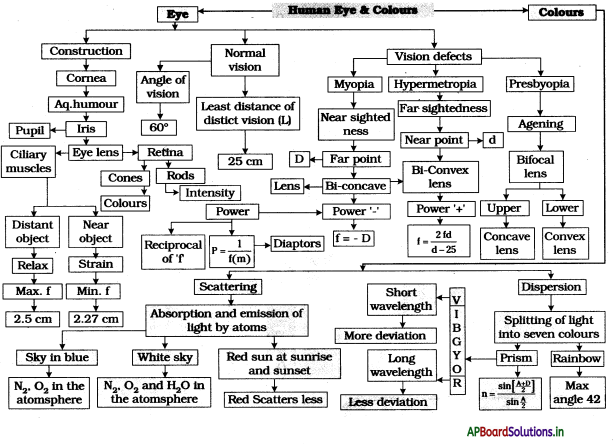