Students can go through AP State Board 10th Class Social Studies Notes Chapter 4 Climate of India to understand and remember the concept easily.

→ What have been the general conditions, year after year over thirty years or more gives us the climate,

→ The elements of weather and climate are temperature, atmospheric pressure, wind, humidity, and precipitation,

→ The factors that affect climate are called climatic controls. These include

→ The average temperatures for the year drop as you go further away from the Equator.

→ The difference between the temperature of day and night and that of summer and winter is not much. This is known as ‘equable climate’.

→ Hills and mountains will have lower temperatures than locations on the plain.

→ The climate of India is affected by the movement of upper air currents in the atmosphere above 12,000 m called ‘Jet Streams’.

→ The temperature in the Indian landmass considerably reduces from Mid-November and this cold season continues till February.

→ During the hot season, as we move from the southern to the northern part of the country, the average temperature increases.

→ The monsoon forms in the tropical area approximately between 20eN and 208S latitudes,

→ The bulk of annual rainfall in India is received from the southwest monsoon.

→ The retreat of the monsoon is marked by clear skies and a rise in temperature.

→ As the Earth started to take shape from a fire bail to a planet, many gases were released.

→ These gases did not escape into outer space because of the Earth’s gravitational pull, and it still holds them back.

→ The atmosphere traps a lot of solar energy that reaches the Earth by preventing it from totally escaping back into space. This is called the Greenhouse effect.

→ Much of the warming has been occurring since thelhdfiStrfal Revolution is because of human activities. Hence, the current global warming is Anthropogenic Globed Warming.

→ Methane is said to be even more powerful than carbon dioxide as a greenhouse gas. c& AGW (Anthropogenic Global Warming) is causing many changes in the distribution of heat in the Earth system.

→ One of the human activities that contribute to global warming is deforestation.

→ An international effort to form an agreement whereby all countries try to reduce their emission of greenhouse gases has so far not been achieved.

→ Weather: The state of the atmospheric conditions over an area at a particular time.

→ Monsoon: The seasonal reversal of wind system in India.

→ Insolation (IncomIng solar radiation): The heat coming from the Sun to the Earth’s surface In the form of rays.

→ Jet streams: The fast flowing upper air currents in a narrow belt In the upper atmosphere above 12,000 m.

→ Pressure zone: The exertion of force by one body on the surface of another.

→ Global Warming: Atmosphere traps a lot of solar energy that reaches Earth by preventing it from totally escaping into space This is called Global Warming.

→ Climate Weather conditions followed a similar general pattern over many years over a large area.

→ Equable climate: The climatic condition where the differences between the temperatures of day and night and summer and winter are not much

→ Loo: A dry hot wind that blows In the northern plain of India.

→ Bursting monsoon: The pre-monsoon showers towards the end of the summer season in the Deccan Plateau.

→ Anthropogenic Global Warming: Global warming that is caused by humans since the Industrial Revolution.

→ October heat: WIth high temperature and humidity, the weather becomes oppressive during the retreat of the monsoon is called October heat. 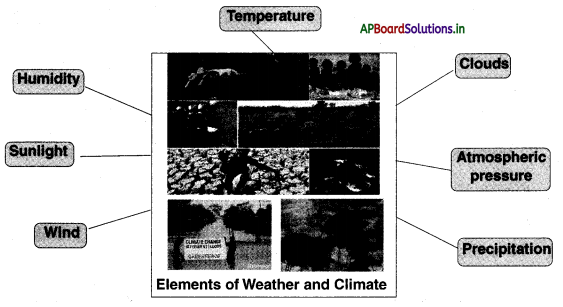 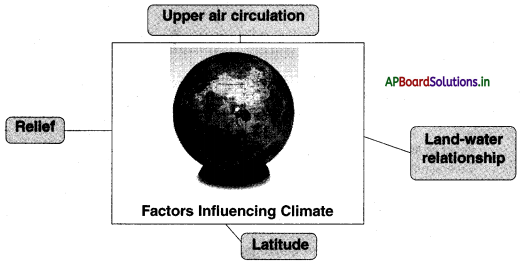