Question 1.
What is Culture?
Answer:
Culture is a continuous process that we inherit from past generations to create future generations. Culture is the way of life of the people living in a society.

Question 2.
Write about the Indian Culture.
Answer:
Unity in diversity is one major feature of Indian culture which makes it unique. Indian culture is composite and dynamic. The culture of India is very ancient. It began about 5,000 years ago. Indians made significant advances in yoga, architecture, mathematics, astronomy, and medicine.

Question 4.
What are the methods used by people in the beginning to write?
Answer:
In the beginning, people wrote on cloth, leaves, barks, etc. In many parts of South India, they wrote on palm leaves. They used pins to write on the dried leaves. They drew pictures and symbols. Gradually the script we are using was developed.

Question 5.
What are the famous books written in earlier days?
Answer:
Popular epics Valmiki Ramayana and Vyasa Mahabharatha were written in Sanskrit. Aryabhatta wrote a book called ‘Aryabhattiyam’. ‘Charaka Samhita’ and ‘Sushruta Samhita’ are the books that laid the foundation for Ayurveda, Sushruta Samhita focuses on surgery.

Question 9.
What is called the Sikh temple?
Answer:
Gurudwara is the name of the Sikh Temple.

Question 11.
Where is ‘The Kaaba’ located?
Answer:
The Kaaba is located in Mecca in Saudi Arabia.

Question 15.
Write about Vardhamana.
Answer:
Vardhamana was born in 599 BCE in Vaishali. His parents were Siddhartha and Trishala. He was a prince by birth. His wife’s name was Yasoda and he had a daughter Priyadarsini. He was also known by titles Mahavira, Tirthankara, and Jina. He attained moksha in 527 BCE.

Question 16.
Write briefly about ‘Jainism’?
Answer:
Jainism is an ancient Indian religion. People who follow this religion are known as Jains. Twenty-four ‘Tirthankaras enriched this religion. The word Jain is derived from the Sanskrit word ‘Jina’. The most famous Tirthankara is Mahavira. The main aim of Jainism is to attain Moksha. When the soul achieves Kaivalya or Jina, it is liberated from the karmas. That state of happiness is known as Nirvana. The people who have reached moksha are called Tirthankaras.

Question 19.
Write about Tirumala temple?
Answer:
Lord Venkateswara Temple is at Tirumala in the Chittoor district. It is located in the Seshachalam hills. It is one of the prominent temples for the Hindus. Hindus think that Sri Venkateswara is the incarnation of Lord Vishnu.

Question 20.
Briefly write about Gautama Buddha.
Answer:
Gautama Buddha was born in Lumbini (Nepal) in 563 BCE. He was named Siddhartha. He was born to the ruler of Kapilavastu, Suddhodana, and his queen Maya Devi. He married Yashodhara and had a son named Rahul.

Question 21.
What brings a change in Siddhartha? What did he do then?
Answer:
Siddhartha saw a sick person, an old man, a monk, and a dead body during his travel. Then he realized the true nature of life. So, he left his kingdom and his family and went in search of truth and peace. After 6 years, he got enlightenment. The tree under which he became enlightened is named ‘Bodhi Vriksha’. He achieved his Nirvana in 483 BCE in Khushinagar, Uttar Pradesh.

Question 22.
What are Tripitikas?
Answer:
Holy books of Buddhism are known as Tripitikas. They are the collection of Buddha life, teachings, and philosophical discourses.

Question 24.
Write about Jesus Christ.
Answer:
Christianity is spread across the world. The founder of Christianity was Jesus Christ. The Bible is the holy book of the Christians and it contains the teachings of Christ. Jesus was born in Bethlehem. His mother was Mary. When he was about thirty years old, he left his home and moved from place to place. He served the weak and the poor. Jesus was accused as a traitor and was crucified.

Question 25.
Briefly explain Islam.
Answer:
Mohammad is considered a prophet or messenger of Allah. The teachings of Allah are written in a book called Quran. It is the holy book of Islam. Prophet Mohammad taught that all men are brothers. He emphasized the importance of love for the whole of humanity. Prophet taught that there is only one God.

Question 27.
Write about Sikhism.
Answer:
Sikhism is a faith whose followers are called “Sikhs”. The word Sikh means Student or Disciple. Guru Nanak was the founder of Sikhism. The Sikh temple is called ‘Gurudwara’. The holy book is Guru Granth Sahib for the Sikhs.

Question 28.
Observe the below given Indian map. 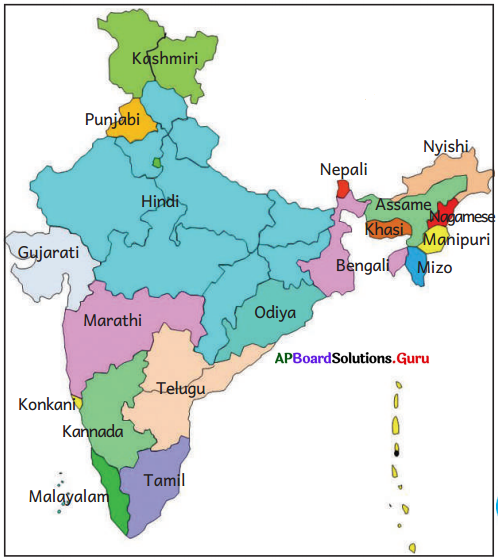 1. In how many states do people speak Hindi?
Answer:
9.

2. Name the language which the people of Assom speak.
Answer:
Assami.

3. Name the language which the people of Maharashtra speak.
Answer:
Marathi.

4. Name the language which the people of Kerala speak.
Answer:
Malayalam.

5. Name the two states in which people speak one language.
Answer:
Telangana and Andhra Pradesh.

6. Name the state where Konkan is spoken.
Answer:
Goa.