Question 1.
When a map is useful?
Answer:
When we want to study the Earth horizontally as a part, such as a country, state, district, town, village, and world as a whole maps are useful.

Question 2.
What is a map?
Answer:
A map is a representation of the whole Earth or a part of it, on a flat surface according to its proportionate scale.

Question 5.
How are maps prepared?
Answer:
Usually, maps are prepared in such a manner that the north direction is at the top of the map. Among the four directions, North is treated as the Principal direction. The south side is at the bottom. So the east side is on the right and the west side is on the left.

Question 6.
Define a sketch.
Answer:
A drawing that is drawn without scale and directions is called a sketch. A sketch is a drawing mainly based on memory and spot observation.

Question 9.
Why symbols are used in the maps?
Answer:
With the use of symbols, maps can be drawn easily. With the Symbols, maps are simple to read. Symbols give a lot of information in a limited space. Even if we don’t know the language of an area we can know the information from maps with the help of symbols.

Question 15.
How many continents are there? What are they?
Answer:
There are 7 continents. They are Asia, Africa, North America, South America, Australia, Europe and Antarctica.

Question 16.
How many oceans are there? What are they?
Answer:
There are 5 Oceans. They are the Pacific Ocean, Indian Ocean, Arctic Ocean, Antarctic Ocean and the Atlantic Ocean.

Question 18.
How web-based maps are useful?
Answer:
Web-based maps provide detailed information about geographical regions and sites around the world. They offer aerial and satellite views of many places.

Question 21.
What is the difference between Globe and Map?
Answer:

Question 23.
Observe the picture and answer the questions. 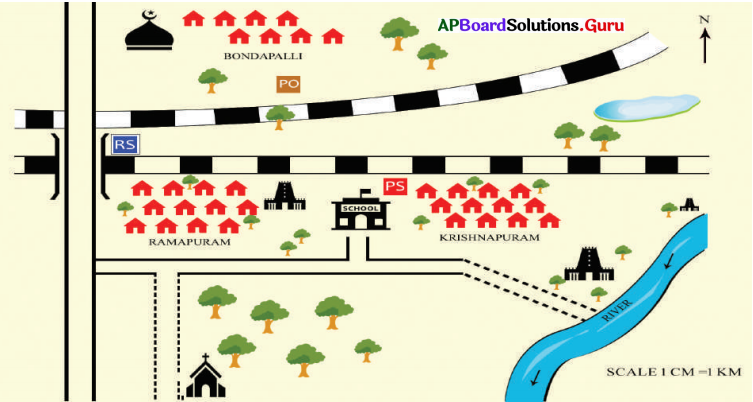 1. Where is the school situated?
Answer:
The school is situated in between Ramapuram and Krishnapuram.

3. Where is the masjid located?
Answer:
The masjid is located in the North-West direction.

4. What is RS. Shown in the picture?
Answer:
It is a Railway station.

What does this symbol denote?
Answer:
Broad Gauge Railway Line.

ii) What is the Political map?
Answer:
Maps showing villages, cities, towns, districts, states and countries with their boundaries are called Political Maps.

Question 25.
Observe the map and answer the following questions. 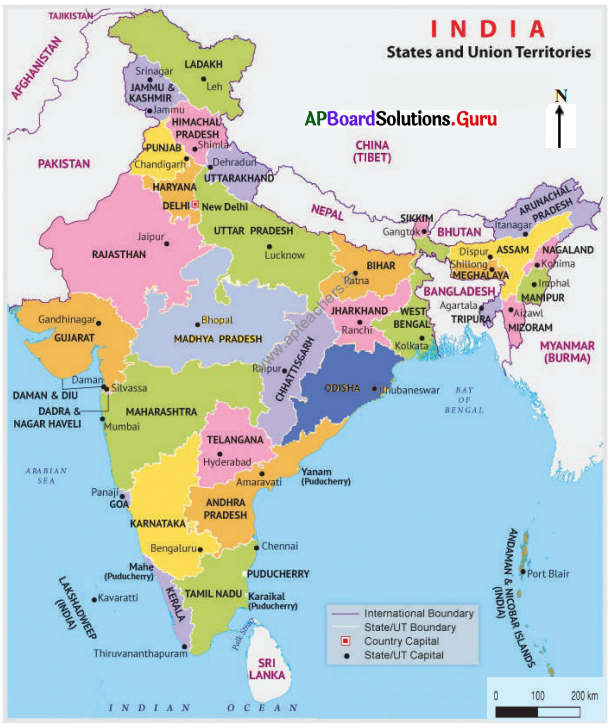 1. What is the country in the Southern direction to us?
Answer:
Sri Lanka.

2. What is the capital of Ladakh?
Answer:
Leh.

3. What is the country in the North-West direction?
Answer:
Afghanistan.

4. What is the capital of the Andaman and Nicobar islands?
Answer:
Port Blair

5. What is the capital city of Madhya Pradesh?
Answer:
Bhopal.

Question 26.
Observe the symbols printed below and answer the following. 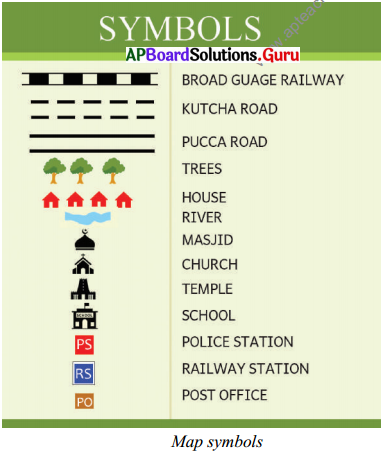 a) Draw the symbols for various religious places from the table.
Answer:

b) Write the Symbols with Letters from the table.
Answer:

d) Draw any other symbol know to you.
Answer:

Question 28.
Do you think that India and its surrounding countries are moving friendly?
Answer:

Question 29.
Why should we appreciate the cartographers?
Answer:

Question 30.
Read the below map and answer the following questions. 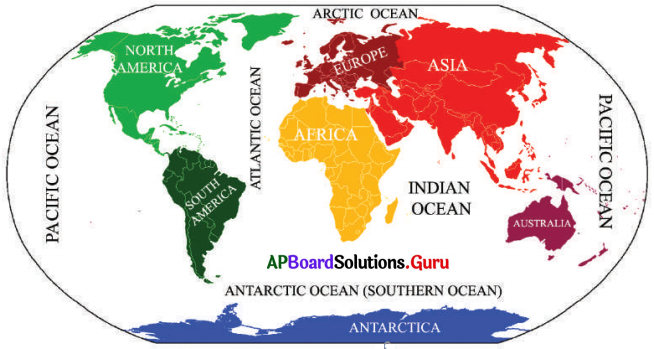 a) Name the continents that have a boundary with the Atlantic Ocean.
Answer:
North America, South America, Europe and Africa.

b) Name the Oceans that are around the poles.
Answer:

e) The name of a continent and an ocean are similar, what are they?
Answer:
Ocean: Antarctic Ocean
Continent: Antarctica.