Question 1.
How did early humans become farmers?
Answer:
Early humans observed places where edible plants were found, about seeds, plants, etc. They started growing their own plants. And thus; they became farmers.

Question 3.
Describe the tools used by farmers and herders.
Answer:
Stone tools have been found from many sites. They are often different from the Palaeolithic tools and are called ‘Neolithic’. There were tools that were polished so as to give a fine cutting edge. Mortars and pestles were used for grinding grain and other plant produce. However, Palaeolithic tools were still used for some purposes. Some tools were also made of bone.

Question 4.
What was the significance of pottery in the Neolithic Age?
Answer:
Many kinds of pottery have been found. These Were sometimes decorated and were used for storing things.. Pots were also used for cooking and eating.

Question 5.
What is domestication?
Answer:
Domestication is the name given to the process in which people grow plants and look after animals.

Question 10.
What are the reasons for nomads to move from one place to another?
Answer:
Nomads consume all the available food from plants and animals of a particular place and later move on in search of food to another place. Animals move from place to place for various reasons and hence this made the nomads move along with them for hunting. Plants and trees bore fruits in different seasons. Thus, people had to move along with the seasons in search of food and survival. People, plants and animals need water for survival. Most of the water bodies like lakes, ponds, streams dry up during the summer. Thus, nomads move to places in search of water during the dry seasons.

Question 11.
What are the tools that hunter-gathers used? How they used them?
Answer:
They used a wide range of tools made out of stone, wood and bone. They used these . tools to scrape animal skins and to clean the skins. They made clothes with the skins, hides with the help of these tools. They used stone tools to cut animal flesh and bones.
They dug soil for edible tubers and roots with these tools. They prepared spears and arrows for hunting, with these they hunted animals easily.

Question 12.
Observe the below given Andhra Pradesh map and answer the following questions. 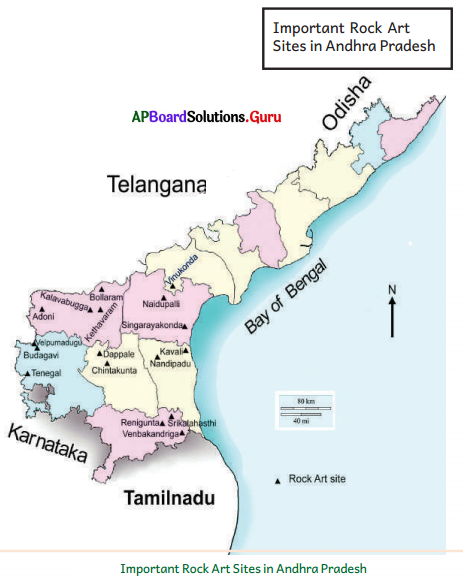 1. What is a rock art site?
Answer:
The rock shelters which have the paintings of the early people are called rock art sites.

2. Name the districts which have no rock art sites.
Answer:
Srikakulam, Vizianagaram, Visakhapatnam, East Godavari and Krishna districts have no rock sites.

3. In which district Adoni is located?.
Answer:
Kurnool district

Question 13.
Who are archaeologists?
Answer:
Archaeologists are the people who study the past by digging up old places where people lived and taking out remains of their lives like tools, bones, pots, buildings etc.

Question 14.
Write about Belum Caves.
Answer:
Belum caves are situated in the Kurnool district near Betamcherla and Banaganapalli. Archaeologists recovered a number of stone tools from these caves. These caves seem to have been used by the stone tools using hunter-gatherers as resting places for thousands of years.
Animal bones, stone tools especially microliths and also tools made of bones have been found in them. Tools made of bones are found only in these caves in the entire Indian Subcontinent.

Question 15.
Write about the paintings of hunter-gatherers.
Answer:
The hunter-gatherers spent their leisure time paintings. They painted pictures of humans, animals and hunting scenes on the walls of the caves and on rock shelters. Different colour stones were used and mixed with animal fat to prepare colours. They used bamboo brushes to paint on rocks and walls.

Question 16.
Write about the rock shelter in the YSR Kadapa district.
Answer:
Chintakanta is in Muddunur Mandal of Y.S.R. Kadapa District. There are ten rock shelters near it that have paintings of early people. There are more than 200 paintings in white and red colour. But there are only ten white paintings. In the red colour paintings, humped oxen are found in only one cave, which is locally called Eddula Aavula Gundu. In the remaining paintings, we can see pictures of deer, stag, fox, rabbits, birds, human beings, etc.