Students can go through AP State Board 7th Class Science Notes Chapter 11 Respiration in Organisms to understand and remember the concept easily.

→ The number of times we breathe in and breathe out the air in a minute is called the respiration rate.

→ The air we breathe fills our lungs that are located in our chest.

→ The air we breathe in does not contain only oxygen. It is a mixture of many gases.

→ Gills are the respiratory organs of the fish.

→ The gills absorb the oxygen that is dissolved in water.

→ Earthworms breathe through their skin.

→ Respiration occurs in all organisms. In this process, oxygen is taken in while carbon dioxide and water vapor are released.

→ Stomata and lenticels help in the exchange of gases in plants.

→ Spiracle: small openings or holes on the sides of the body of cockroach which help to breathe

→ Carbon dioxide: A colorless. odorless, non-flammable gas formed when carbon burns in excess oxygen. It is also produced by respiration.

→ Oxygen: A gas that is essential for living things.

→ Inhale: The Breath in, draw into the lungs.

→ Exhale: Breath out, send out, emit, breathe forth. 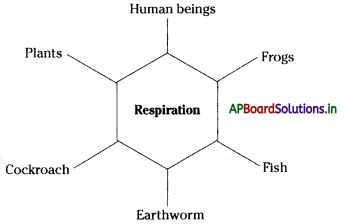 → Albert Einstein was born in 1879 in the German city of Ulm.