Students can go through AP State Board 7th Class Science Notes Chapter 6 Weather and Climate to understand and remember the concept easily.

→ Farmers listen to the Radio or watch T.V. for a weather forecast.

→ Hyderabad is the capital of Telangana.

→ The weather is a complex phenomenon that can vary over very short periods of time.

→ We have different types of measuring instruments to measure different weather components.

→ The weather of a place can change every day.

→ Wind speed and direction are measured with Anemometer.

→ The Indian Meteorological Department (IMD) studies the climate of our country. Weather affects our life.

→ The factors hot, cold, winds, rain, etc describe the weather of a place.

→ We can measure the temperature of a place with maximum and minimum thermometers.

→ The quantity of water vapor (moisture) in the air is humidity.

→ Humidity is measured by a hydrometer.

→ Rainfall of a particular place is expressed in millimeters (mm), centimeters (cm) and measured with a rain gauge.

→ The climate of a place can be defined after 25 years of weather observations.

→ We adjust to the climate to live comfortably.

→ The Indian Meteorological Department (IMD) studies the climate of our country.

→ Weather: The state of the atmosphere at a given time and place, with respect to variables such as temperature, moisture, wind velocity, and barometric pressure.

→ Forecast: To estimate or calculate in advance, especially to predict (weather conditions) by analysis of meteorological data.

→ Temperature: The degree of hotness or coldness of a body or environment.

→ Climate: The meteorological conditions, including temperature, precipitation, and wind that characteristically prevail in a particular region.

→ Meteorology: The science that deals with the phenomena of the atmosphere, especially weather and weather conditions.

→ Plowing: A farm implement consisting of a heavy blade at the end of a beam, usually hitched to a draft team or motor vehicle and used for breaking up soil and cutting furrows in preparation for sowing.

→ Thermometer: An instrument for measuring temperature, especially one having a graduated glass tube with a bulb containing a liquid, typically mercury or colored alcohol, that expands and rises in the tube as the temperature increases. 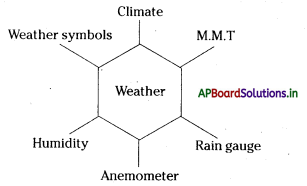 → Many people died during the tsunami in Andaman and Nicobar islands in 2004. But the tribals who observed the ocean moving back and birds making sounds moved away from danger. They could predict the danger and save their lives.

The people living in an area adjust to the conditions of climate. For example, the rainfall has to be relatively less for the past two decades. Even in Rayalaseema during the rainy season, the tanks and canals remain dry. The dried canals and tanks are now used for other purposes. The less rainfall has also led to developing ways to use less water. The change in rainfall pattern shows there may be shifts in climate over long periods of time. In areas that do not have a climate of rain when it rains heavily there is no way to drain out the water. As a result, many areas were flooded and submerged in Kurnool in 2010 and so in other parts of Rayalaseema