I. Fill in the blanks.

This is the speed of the train in km/hrs,
to convert it into m/s….

Question 2.
Can an object possess translatory and rotatory motion at the same time? Give an example.
Answer:

Question 3.
In a sewing machine used by tailors, mention the type of motion of its parts when it runs, a) the wheel b) the needle c) the cloth
Answer:

Question 4.
Write the motion of different parts of a bicycle while it is in motion, a) the wheels b) the cycle chains c) the pedal with its arm d) the movement of the rider along with the bicycle.
Answer:

Question 5.
John tied a stone to a string and whirled it around. What type of motion do you observe?
Answer:
When a stone is tied to a string and whirled it around, it move in a circular path around the hand. That means the stone fallows a curved path with respect to the hand as a fixed centre or axis of rotation. So it is said to be in rotatory motion.

Question 6.
What are Uniform and Non-Uniform motions? Give four examples for each type of Motions.
Answer:
i) Uniform motion : “If a body covers equal distances in equal intervals of time, it is said to be in uniform motion”.
Ex: 1. Hands of a clock
2. Revolution of Earth
3. A train going at a steady speed
4. The blades of a fan

ii) Non-uniform motion: If a body covers unequal distances in equal intervals of time, it is said to be in non-uniform motion.
Ex : 1. Movements of butterfly in a garden
2. The motion of a car in a city traffic
3. An aircraft while landing
4. Running of athletes in a marathon

Question 7.
Your friend told you the motion of rocket is fast motion. Will you agree? How can you decide whether the motion of a body is slow or fast?
Answer:

Question 8.
How can you appreciate the clocks and watches in measuring or estimating time?
Answer:

Question 1.
What do you observe from the picture? 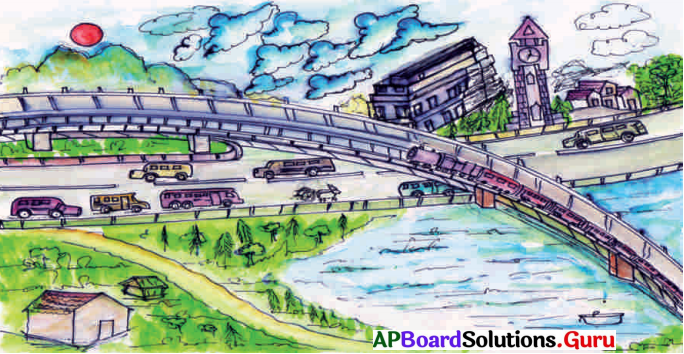 Answer:
You can see the movement of cars, buses, train, boat, clouds, birds and minute hand in the clock etc. On the other side we can see the bridge, buildings, road, hill and the clock tower which are not moving.

Question 2.
Do all these things move alike?
Answer:
No.

Question 4.
What do we call the motion of a train moving in a straight line?
Answer:
Translatory motion.

Question 6.
How do you decide whether any object is in motion or at rest?
Answer:

Question 7.
Are all these trees, buildings, electric poles, etc. really in motion?
Answer:
No.

Question 8.
Which one do you feel is moving, passenger in the bus or tree?
Answer:
Passenger.

Question 9.
Which one do you feel is moving, tree or your co-passenger?
Answer:
Tree.

Question 12.
How force effects the motion?
Answer:
Force can change the position of motion to rest, of vice – versa.

Question 13.
What did your friend apply to make the ball move?
Answer:
Force (muscular force).

Question 14.
What did you apply to change the direction of the ball?
Answer:
Force (muscular force).

Question 15.
What did your friend apply to stop the moving ball?
Answer:
Force (muscular force).

Question 16.
What can we call the length of path that an object moves from one place to another?
Answer:
Distance.

Question 17.
Ouserve the picture, Kavitha can reach her school in two ways. From A, B roads which path will you suggest her to reach the school early? You will suggest the shortest distance pat*” which is road A. 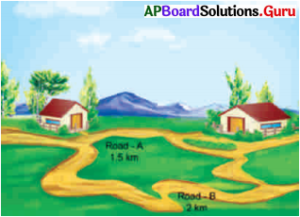 Question 18.
What can we call the duration of motion of the object when it is moving from one place to another place?
Answer:
Time to travel

Question 19.
How can we call the period between starting and ending incidents (events) in a running race.
Answer:
Time.

Question 20.
How do we measure or estimate time?
Answer:
Clocks (watches) are the most common time measuring devices.

Question 22.
How many types of motions are there?
Answer:
Motion is of three types :

Question 23.
Have you played with a toy car? How does it move if you push it forward?
Answer:
It moves in translatory motion.

Question 24.
Do all the parts of bus like wheels, headlights, windows etc., move through the same distance from building ‘A’ to building ‘B’?
Answer:
Yes, all parts of the bus moves along the bus.

Question 26.
Can you give some more examples of motion in which all points of moving body move through same distance in the same direction?
Answer:
Examples:

Question 27.
If all the parts of a body move along the curved path. What type of motion it is?
Answer:
Rotatory motion.

1) Do you find any similarity in the above motions?
2) What is the path of motion of each part of the body that moves? ’
Answer:

Question 30.
Have you played with a see-saw? How does it move?
Answer:

Question 32.
Which similarity do you find in the moving parts of the above instruments?
Answer:
All are moving in ‘to and fro’ motion.

Question 33.
Is the direction of motion constant? Are they moving in the same path again and again?
Answer:

Question 34.
Does all motions take same time to cover same distance?
Answer:
No.

Question 35.
Do you find any relation between distance and time?
Answer:
Yes, distance divided by time give speed the objects.

Question 36.
How to calculate the average speed?

Question 38.
Have you seen launching of rocket in T.V, how does it move?
Answer:

Question 41.
Have you noticed what happens if you let the air out of a inflated balloon?
Answer:
The air comes out of balloon in one direction and the balloon moves on the opposite direction with the same speed.

Question 42.
Have you observed the movement of Diwali rocket cracker?
Is there any similarity between movements of rocket cracker and real rocket?
Answer:

Question 1.
Use a tennis ball or cricket to make it translatory motion, rotatory motion, and oscillatory motion. Write a note on it and discuss with your friends.
Answer:

Question 2.
Make a water clock or a sand clock and use it to know time.
Answer:

Question 1.
Classify the objects given in the figure based on motion and rest and what is your inference?

Question 2.
How do you show that force is required to change the object from rest into motion, to change its direction and even to change from motion to rest?
Answer:

Take a football and go to your school ground with your friends. Stand in a triangle shape as shown in the figure.Ask your friend to kick the ball in your direction. You pass the ball to another friend. Ask him to stop that ball. Now answer the following questions.
1) What did your friend apply to make the ball move?
Answer:
Force

2) What did you apply to change the direction of the ball?
Answer:
Force

3) What did your Mend apply to stop the moving ball?
Answer:
Force

You all applied muscular force with your legs to do so.

From the above observation we can say that force is required, to change the object from rest into motion, to change its direction and even to change from motion to rest.

Question 3.
Write any activities to explain the distance and displacement.
Answer:
Try to measure the distance between your bench to the place where MDM is been served in your school.

How much it is? (Student has to measure and answer on their own)

Have you ever used the google maps to know the distance and direction of your desti-nation?

Observe the picture, Kavitha can reach her school in two ways. From A, B roads which path will you suggest her to reach the school early? You will suggest the shortest distance path which is road A.

From the above activity and examples, we can say that when an object travels from one place to another, the length of the path can be measured and it gives the distance between the two places. When an object travels along the straight-line path from one place to another place, it will reach faster. The length of the straight-line path is the shortest distance between two places, called displacement.

Question 4.
Conduct 100 meter running race with the help of your physical education teacher. Use stop watch from lab or mobile phone to measure time taken to complete the race by each student. Fill the table given below.

[Note : Fill in the table with your records)

Question 5.
Consider the following situation. Robert and Kamala measured the distance trav¬elled while coming to school and the time taken to cover that distance. Their data is shown in the Table. You can draw a graph by following the steps given below:

3) Mark values for the time and the distance on the respective axis according to the scale you have chosen. 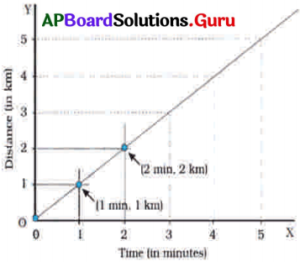 From the distance-time graph we can find the speed of object.