Question 1.
Discuss the conflict between Vijayanagar and Bahaman kingdoms.
Answer:

Question 2.
Write about the Nayakar system in Vijayanagar kingdom.
Answer:
In Vijayanagara empire Nayakas and Amara Nayakas are there.
Nayakas:

Question 3.
Describe the development of trade and commerce under the Vijayanagar rulers.
Answer:

Question 4.
Read the concept of “Art and Music” in the lesson and compare it with the present.
Answer:
During the Vijayanagara period Carnatic music is famous. But at present due to change the interest of the people rock and pop music are famous.

At that time Bharata Natyam, Kuchipudi, Yakshaganam, Perni Natyam are famous. But at present breakdance and disco dance styles are famous. 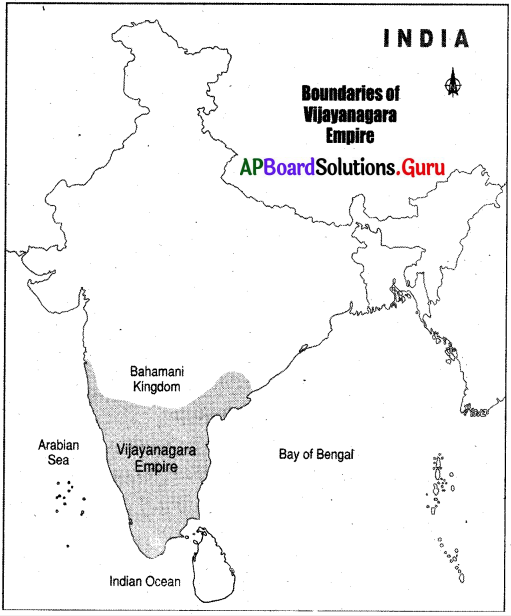 Result:
So the Bahamani kingdom disintegrated into five kingdoms namely :

Question 10.
Describe the services of Reddy kings to the people.
Answer:

Question 2.
Play a drama of Astadiggajas with the help of your teacher.
Answer:

Question 3.
There are so many ancient and modern Indian women who are role model to us. Prepare a list of great India women with the help of your teacher and parents.
Answer:
Sita, Savitri, Arundhathi, Anasuya, Ahalya, Gargi and Maithreyi etc.,–these are the great woman from our Indian mythology. 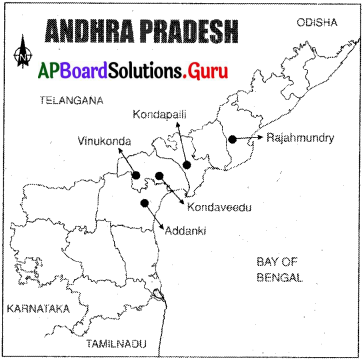 Question 1.
Why did Vidyaranya want to establish new kingdom on the bank of Tungabhadra river?
Answer:
Vidyaranya told the brothers Hari Hara Raya and Bukkaraya the South Bank of the River Tungabhadra area was sacred.

And he advised them to establish a new kingdom on the bank of Tungabhadra river.

Question 2.
Under which dynasty Harihara-1 and Bukkaraya-1 worked?
Answer:
Hari Hara Raya – I and Bukkaraya – I worked in the court of the Kakatiya king Pratapa Rudra II of Warangal in 1323 CE.

After defeat of Kakatiya kingdom, they worked under the control of Muslim rule. Later they established Vijayanagara Kingdom.

Question 5.
Discuss the contribution of the Vijayanagara empire to Indian art and. Architecture.
Answer:

The Veerabhadra temple of Lepakshi, which was built by the brothers Viranna and Virupanna, is dedicated to Veerabhadra. it is an example of the Vijayanagara architectural