Students can go through AP State Board 7th Class Social Studies Notes Chapter 15 Establishment of the British Empire in India to understand and remember the concept easily.

→ In 1600 AD, the East India Company acquired the grant from Queen Elizabeth-1 to trade with the East.

→ By the time the English reached India, the Portuguese, the Dutch and the French had already established their trading centers in India.

→ European traders formed their own East India Companies to trade in India.

→ Trade was carried on with arms and trading posts were protected through fortification.

→ This effort to fortify their settlements and carry on profitable trade also led to intense conflict with local rulers.

→ After the Mughal empire had broken up into small kingdoms, the companies found their chance to assert their power.

→ When two Indian rulers were fighting, the European Companies interfered took sides, lent their army to one side, and helped them defeat their rivals.

→ In return, the companies were gifted many trade concessions and large amounts of money by the rulers.

→ The companies also began to acquire small parts of kingdoms as gifts from the rulers.

→ Slowly the English began emerging victorious over the French Company in the struggle for dominance in India.

→ Some Indian rulers exempted the company from paying taxes on many of the goods. However, the company, its officials, and the people took advantage of these concessions.

→ Thus there was much looting and swindling took place in the kingdoms by the company, its officials, and the people.

→ The English gradually began to feel that they could make fuller and freer use of India for trade if they themselves ruled the country.

→ So they began removing the Nawabs and Rajas and started ruling themselves.

→ With the policies of Robert dove, Warren Hastings, Lord Wellesley, and Lord Dalhousie, a large area of India came under British rule.

→ There was discontentment against British rule in all spheres of Indian life. The royal families, the farmers and landowners, tribal people, Hindus and Muslims, and finally the Indian Sipahis under British service resisted the British.

→ On top of this, the Sipahis suspected that the cartridges for their guns were being coated with cow and pig fat to keep them dry. They felt that their religious faith was being violated.

→ All these causes led to a revolt in 1857. The revolt that started at Meerut and Barrackpur spread like wildfire to all parts of India.

→ A wave of people and policemen joined the Sipahis. The bungalows and offices of English were set afire and many English people were killed.

→ Many royal families such as Nawab of Avadh, the Peshwa Nana Sahib, Lakshmi Bai of Jhansi, and Tantia Tope joined the revolt.

→ Despite the widespread success of the revolt, the English slowly gained control over the situation.

→ Lack of combined and well-planned effort from the rebels and the shortage of modern arms caused the failure of the revolt.

→ The English brutally punished the rebels and suppressed the revolt.

→ In 1858, Queen Victoria of England made a declaration saying that they would not dethrone the Indian kings and the British government would not interfere in religious matters of Indians.

→ Royal Charter: Written or printed statement of rights, permission to do something, especially from a ruler or government.

→ Sole right: Right belongs to one person or company.

→ Demand: Desire or ability to buy or obtain (goods etc).

→ Jagir: It was a type of feudal land grant in South Asia at the foundation of its Jagirdar system.

→ Colonies: A colony is a group of people who settle in a new place but keep ties to their homeland.

→ Maulvies: An expert in, or teacher of Islamic law. (Or) Islamic scholar. 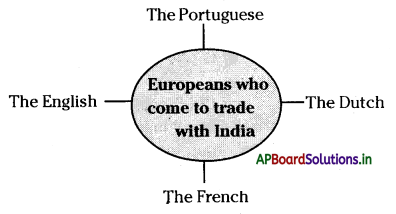