→ When children fall ill repeatedly when people are sick and very weak they worship the folk goddesses by offering Bonalu and sacrificing a cock, or they go to the Pir Baba’s Dargah and ask the Maulvi to tie ataWiz. tt is a general scene in villages.

→ There are a large number of village deities.

→ Pochamma is the most popular folk goddess of Andhra Pradesh. Near every village, a small shrine is dedicated to her. The main goddess is in the form of stone under a neem tree.

→ Katta Maisamma is a goddess of water and is worshipped in the form of a small stone on the tank bund. With Her blessings, the crops flourish.

→ Once in five years, a major festival is celebrated in which sheep, goats, and hens are sacrificed.

→ Gangamma is also considered a water goddess who protects fishermen who go out into the sea.

→ Yellarnma, the goodness, guards the boundaries of the village and will not allow any disease or evil Village.

→ A devotee of ‘Devi becomes a deity and is called Paidi thalli. In Northern Andhra ‘Paidi thaTti Ammavart Jafthara is celebrated.

→ The farmers of Andhra Pradesh believe that Potharaju looks after their agricultural lands arid crops and products the crops from dreadful diseases, thieves and animals.

→ Beerappa and Katamaraju are worshipped by cowherd and shepherd communities. They are considered protectors of cattle and sheep.

→ Many office folk gods and goddesses were actually local heroes who either died fighting for the defense of their people or were wronged by the powerful people of their times.

→ Sammakka and Sarakka (Medaram) Jatara is celebrated at Medaram village of Taadwai Mandal in Warangal district. Nearly one crore people attend it.

→ The Medaram Jatara is celebrated once every two years.

→ Moharram, a Muslim festival, commemorates the battle of Karbala in Iraq in which the grandson of Prophet Mohammad was killed.

→ Muslim celebrates Urs or anniversaries of Muslim saints who lie hurried in various parts of the state.

→ People, who seek some specific blessings like children or jobs etc visit the Dargahs and pray there.

→ Dargahs are built on tombs of Sufi saints who propagated Sufism.

→ Bonalu is one of the popular folk festivals celebrated in the Telangana state.

→ Many historical books tell us that such folk gods were worshipped in very old times also. & Many of these deities are worshipped by people irrespective of their caste or religion or economic status.

→ Urs: Urs is the death anniversary of the Sufi saint in the dargah.

→ Peeri: A Peeri is prepared with bamboo strips in a dome shape.
(Or)
The Muslims too pay respects to the heroes who fought against evil.

→ Bonamu: The Godness is worshipped by offering food, which is later shared among the family members. 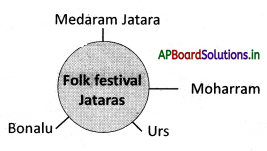