Students can go through AP State Board 8th Class Physical Science Notes Chapter 12 Stars and the Solar System to understand and remember the concept easily.

→ The shortest shadow cast by a vertical object on the ground always falls in the north-south direction.

→ The shortest shadow of an object occurs at local noon.

→ The time duration for the appearance of the sun and moon after the completion of a cycle is different.

→ Changes in the appearance of the moon are called phases of the moon.

→ On the new moon day, the sun and moon are on the same side of the earth.

→ On the full moon day, the sun and moon are on either side of the earth.

→ Moon has no atmosphere as we have on the earth.

→ The pole star is situated in the direction of the earth’s axis and hence it appears as not moving.

→ There are eight planets in our solar system.

→ Among the eight planets of the solar system, the earth is the only planet that supports life.

→ A large number of objects that revolve around the sun between the orbits of Mars and Jupiter are asteroids.

→ The length of the tail of the comet grows in size as it approaches the sun.

→ A meteor is usually a small object that occasionally enters the earth’s atmosphere.

→ A body that reaches the earth is called a meteorite.

→ Local noon: The time when the shortest shadow occurs is called the local noontime at that place.

→ Sundial: A clock based on shadows of an object due to sunlight.

→ Dakshinoyanam: When the sun looks like traveling south of the sky, it ¡s called the Dakshinayanam.

→ Uttarayanam: When the sun looks like traveling towards the north of the sky is called the Uttarayanam.

→ Constellations: Group of stars having some shapes of animals or human beings is called constellations.

→ Galaxy: A group of stars that contain millions of stars is called galaxies.

→ Pole star: The star in the sky which appears fixed at one point.

→ Solar system: The sun and the celestial bodies which revolve around it form the solar system.

→ Planets: The planets look like stars but they do riot have the light of their own.

→ Asteroids: A large number of objects that revolve around the sun between the orbits of Mars and Jupiter ore asteroids

→ Comets: The celestial objects which revolve around the sun ¡n highly elliptical orbits.

→ Meteorite: A body that reaches the earth is called a meteorite. 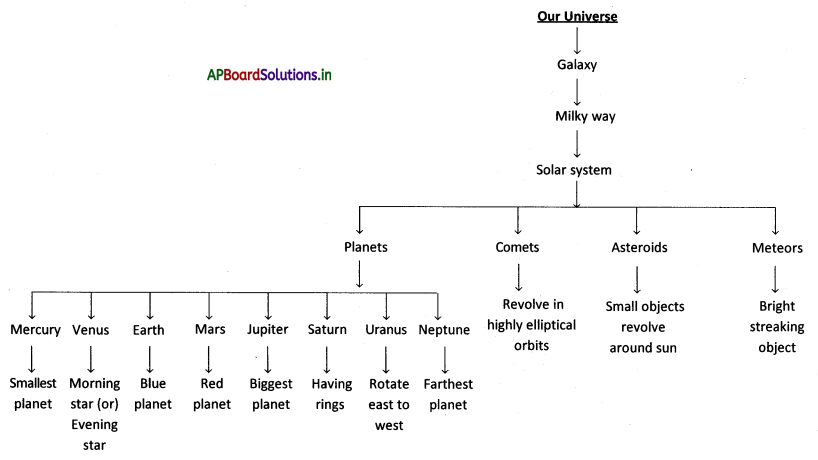