Students can go through AP State Board 9th Class Biology Notes Chapter 5 Diversity in Living Organism to understand and remember the concept easily.

→ Diversity is the symbol of nature.

→ Diverse organisms are grouped based on the similarities and differences found among them.

→ The presence of differences between organisms of the same species is called variation.

→ Variation between different species is always greater than the variation within a species.

→ Variations form a basis for the selection of characters to group organisms.

→ No two organisms are identical in nature.

→ The way in which the organisms may have evolved is classification.

→ Classification is the systematic study of organisms present in nature with respect to their evolution.

→ Classification helps us in exploring the diversity of life forms.

→ Classification helps to study the organisms in a proper and systematic manner.

→ Classification helps in understanding the relationship among the organisms and their interdependence.

→ Classification gives us an idea of evolution.

→ Classification helps to make comparisons in an easier way.

→ Charles Darwin proposed a theory known as Natural selection in 1859 and wrote a book on evolution known as ‘Origin of Species.’

→ In the first and second centuries AD, Charaka and Sushruthad classified plants on the basis of their medical importance.

→ Parasar in his book ‘Vrikshayurveda’ classified several land plants on the basis of the structure of flowers.

→ According to Whittaker, all living organisms are classified into five kingdoms namely

→ All cells are similar and are originated from a single ancestor ceil called Last Universal Common Ancestor (LUCA).

→ The Porifera group animals have pores or holes in the body. They form a canal system in the body. Eg: Sycon, Spongilla.

→ The coelenterate animals are diploblastic and have a body cavity or coelom. Eg: Hydra, Jellyfish.

→ In Platyhelminthes animals, the body is flat, bilaterally symmetrical, and are triploblastic. Eg: Tapeworms, Liver flukes.

→ In nematodes, the body is round bilaterally symmetrical triploblastic and pseudocoelomates Eg: Wucheraria Bancroft, Ascaris.

→ Protochordate is bilaterally symmetrical, triploblastic coelomate animals. Notochord may not present at all stages in their life. Eg: Balanoglossus, Amphioxus.

→ Vertebrates have a true vertebral column and internal skeleton.

→ The naming of organisms with distinctive scientific names is called nomenclature.

→ The binomial nomenclature is made up of two words a generic name and a specific name and was introduced by Carl Linneaus.

→ Diversity: Variety of people or things that are very different from each other.

→ Biodiversity: Variety of life forms found in a particular region.

→ Variation: Difference in structure or function, which is shown in individuals of the same species.

→ Cotyledon: The first leaf that is grown from seed.

→ Lineage: People of the family who lived in the past; the way ¡n which members of a family are descended from other members.

→ Classification: It ¡s the systematic study of organisms present in nature with respect to their evolution.

→ Thermophiles: Prokaryotes that live in hot springs and other places where the temperatures were near or even above the boiling points of water.

→ Ancestor cell: A cell that lived ¡n the past from which a modern cell has developed.

→ Interbreed: To produce young ones from parents of different breeds or groups.

→ Bilaterally symmetrical: The left and right halves of the body have the same design.

→ Triploblastic: Different tissues are formed from three layers of cells.

→ Coelom: Space present inside the body.

→ Pseudocolor: False cavity present inside the body of an organism.

→ Protochordate: Chordates are developed from these animals. They are marine animals.

→ Notochord: A cylindrical chord/string-like structure which ¡s along mid-dorsal line ¡n all chordates.

→ Cold-blooded animals: These animals can change their body temperature according to their surroundings.

→ Hippocampus: Known as a sea horse. Fish are like animals in which males carry babies as our mothers.

→ Endangered: A type of animal or plant that may soon no longer exist. e.g.: Whale.

→ Nomenclature: Naming of organisms with a distinctive scientific name.

→ Fauna: All animal life in a region.

→ Evolution: Change gradually.
The scientific idea that plants and animals developed gradually from a simple to more complicated forms.

→ Animal kingdom: One of the five major groups into which all living things are organized by Whittaker. The biggest stage in classification.

→ Domain: An area of activity, interest, or knowledge. The organization of organisms starts here formed by the union of one or two parts.

→ Phylum: One of the major groups into which the animal kingdom is divided.

→ Class: A term used for describing a collection of similar orders.

→ Order: A collection of similar families.

→ Family: Principal sub-division of an order of animals/plants.

→ Species: A group of plants or animals having common characteristics that are similar enough to interbreed and perpetuate. 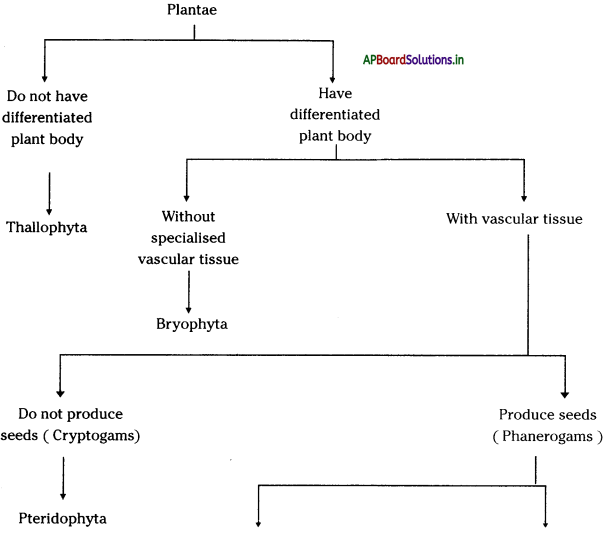 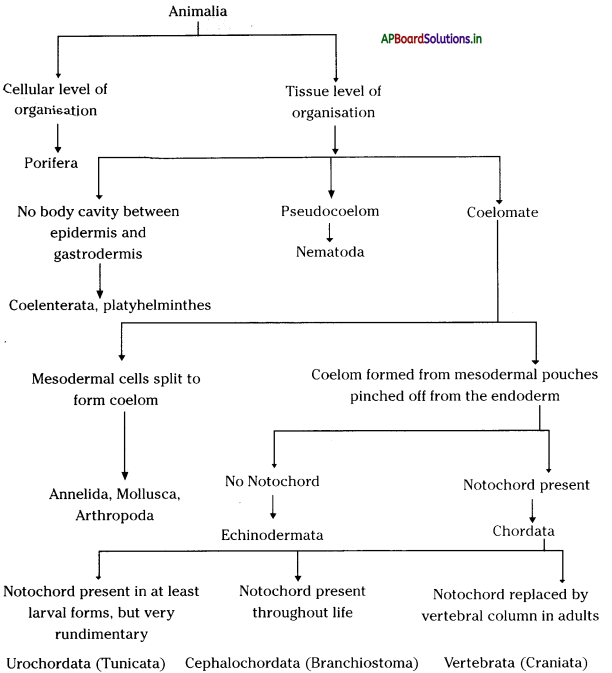 → There are various hypotheses as to the origin of prokaryotic and eukaryotic cells. Because all cells are similar in nature, it is generally thought that all cells came from a common ancestor cell termed the Last Universal Common Ancestor (LUCA). These LUCA eventually evolved into three different cell types, each representing a domain. The three domains are the Archaea, the Bacteria, and the Eukarya (a classification as suggested by Woese).

→ Archaea and bacteria are prokaryotic cells that are they do not have a membrane-bound nucleus, the nuclear material is presently dispersed in the cytoplasm.

→ The cell walls of bacteria unlike the archaea contain fat-like chemical peptidoglycan.

→ Eukarya have eukaryotic cells or cells having a membrane-bound nucleus.

→ Fishes are cold-blooded animals. They can change their body temperature according to their surroundings. Most of the fishes are oviparous but some like sharks give birth to young ones.