Students can go through AP State Board 9th Class Biology Notes Chapter 9 Adaptations in Different Ecosystems to understand and remember the concept easily.

→ Adaptation is a physiological or structural characteristic of an organism, becomes suited to a particular environment

→ Organisms in nature create adaptable situations around them on the basis of their needs.

→ Organisms need shelter, food, light, air and many other things for their survival

→ Adaptations in xerophytic plants are succulent stems, reduced leaves and have a deep root system.

→ Each form of marine life has become adapted to a specific area with a relatively narrow variation in salinity, temperature and light

→ Marine life has adapted to an incredible variety of conditions and habitats.

→ The marine ecosystem is divided into euphotic zone, bathyal zone and abyssal zone.

→ Based on the light penetration freshwater ecosystem is divided into a littoral zone, limnetic zone and profundal zone.

→ Partially submerged plants have numerous air spaces inside the stems, leaves, roots that aid in gaseous exchange and buoyancy.

→ Plants in temperate regions shed their leaves before the winter.

→ In tropical regions, some plants shed their leaves before the start of summer.

→ Animals living in cold regions have a thick layer of fat or thick fur coat covering their bodies.

→ To protect themselves from the extremes of hot and cold conditions, animals adapt to hibernation and aestivation. E.g.: frog

→ Adaptations: It ¡s a feature that ¡s common in any population because it provides some improvements for better survival.

→ Succulent stem: Water is stored in the tissues of the stem.

→ Xerophytes: Plants that were grown in fewer water areas like deserts.

→ Ornamental plants: Decorative plants are kept in pots at homes.

→ Adder snake: A small poisonous snake often with diamond-shaped marks on its back.

→ Nocturnal: Animals that are active during the night.

→ Ecosystem: Unit of a biosphere. It comprises both biotic and abiotic components.

→ Blubber: The fat of whales and other sea animals.

→ Photosynthesis: It ¡s the process of preparing carbohydrates by plants in the presence of sunlight, chlorophyll, water and carbon dioxide. It is an anabolic process.

→ Respiration: It ¡s a catabolic process. Carbohydrates are broken down into water and carbon dioxide releasing energy.

→ Barnacles: Fish that attaches itself to objects underwater. e.g. Ample to rocks and bottoms of ships.

→ Transpiration: The loss of water vapour from a plant, especially through the stomata.

→ Herring gulls: A large North Atlantic bird of gull family with black tips to its wings.

→ Camouflage: The way in which an animal’s colours or shape matches its surroundings and makes ¡t difficult to see.

→ Symposium: A small conference. A meeting at which experts have discussions about a particular subject.

→ Trout: A common freshwater fish that is used for food.

→ Herring: A North Atlantic fish that swims ¡n very large groups and is used for food.

→ Bioluminescence: Refers to the production of light by living organisms. It ¡s common in deep-sea organisms, and in some insects. e.g. Fireflies.

→ Puddle: Small amount of water or liquid especially rain that has collected in one place on the ground.

→ Scavengers: Animal feeding on dead organisms which it has not killed.

→ Euphotic zone: The top layer of a sea through which light can penetrate, allowing photosynthesis to take place. It is usually 200 m in depth.

→ Bathyal zone: It is usually 200 m to 2000 m depth. Dimly light can penetrate. Light is not sufficient to perform photosynthesis.

→ Littoral zone: The shallow zone near the seashore. The water near the shore is usually muddy.

→ Limnetic zone: It is the open water zone at the top of the water body that receives a good deal of light.

→ Profundal zone: It ¡s dimly light and cold. Most heterotrophs are found in this region.

→ Amphibians: Animals that can live in water and also on land. E.g.: Frogs, toads etc.

→ Aestivation: Summer sleep. This refers to a state of inactivity which some animals undergo during long periods of drought or heat.

→ Crustacean: Any creature with a soft body that ¡s divided into sections and a hard out shell. E.g.: Crabs, shrimps etc.

→ Finch: A small bird with a sharp beak. Our state bird is also a finch. 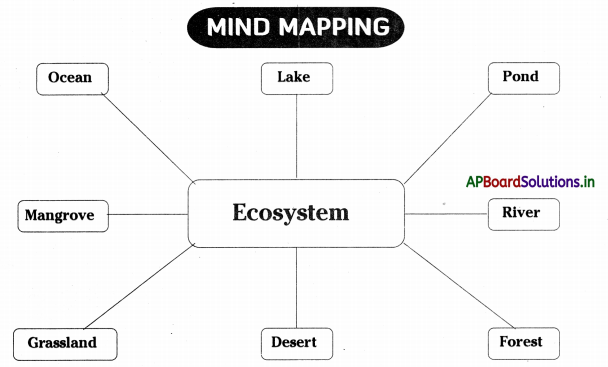 → Though these are called Living stones they are not stones. The swollen leaves are adapted to desert conditions, minimizing water loss and storing water. These are also called Pebble Plants. Each pebble is actually a leaf with a cut window that lets in light. The stone-like appearance deceives the animals and saves them from being eaten. 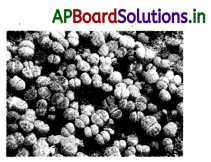 → Animals that are active during the night and sleep during the day are called Nocturnals. These creatures generally have highly developed senses of hearing and smell. They have especially adapted eyesight to see well in dark. Animals like bats, emit a high pitched sound that bounces off objects to find prey or protect from predators.

Cats, Rats, Bats, Owls are the Nocturnals generally seen in our surroundings. Some insects like crickets, firefly and fishes like cuttlefish are active during the night only. Some desert animals become nocturnals in order to escape extreme daytime heat.

→ Electric Eel is an electric fish. It is capable of generating powerful electric shocks of up to 600 Volts when uses for hunting self-defence. It is an apex predator. Despite its name, it is not an eel, but rather a knife fish.