Question 1.
The speaker talks about “creative battle” in the beginning of his speech. What does he mean by this phrase?
Answer:
Martin Luther King (Jr) describes the Civil Rights Movement of the blacks in the USA as a ‘Creative battle’. This is to show that the battle is going to ‘create’ a new world. The battle uses ‘good’ will and ‘good’ intention as weapons. It follows ‘good’ methods like ‘truth’, ‘non-violence’ and ‘love’. Its aim is to promote universal brotherhood. Hence it is a creative battle.

Question 4.
What sort of future does the speaker visualize for the Americans and the mankind in general?
Answer:
Martin Luther King (Jr) is full of hope. He visualises a bright future for Americans and humanity. He dreams of a widening and lengthening super highway. Blacks and whites will travel along it in a cooperative and brotherly mood. That will lead them to an ideal land. There everyone gets food, education, justice, equality and dignity. Love, truth and peace will rule supreme.

I. Given below are the words taken from the reading passage listed as key words. Match the word with the meaning as used in the text.

Do they have any specific meaning?
Why does the speaker use such expressions?

The above phrases are figurative expressions. They mean a word or a phrase used in a different way from its usual meaning in order to create a particular mental image or effect to add interest to a speech or a writing. Here the two words that convey opposite meaning are combined together to get a positive meaning.

Now read the passage once again and pick out the figurative expressions.

Find out the meanings of all the expressions including the ones given above.
Answer:

I. You have listened to the speech delivered by Subhash Chandra Bose and read the speech by Martin Luther King Jr.
Let’s analyze their speeches.

Discuss the following questions in groups.
1) How do they begin their speeches?
2) Do you find any logical sequence of ideas in their speeches?
3) What sort of language do they use? (Persuasive, argumentative, emotive)
4) Do you notice any quotations, examples? (to support their argument)
5) Do they use any linkers for cohesion?
6) Do they maintain unity of ideas/thoughts for coherence?
7) What expressions do they use to conclude their speeches?
Answer:

II. Prepare a speech on the following occasion in your school.
You can use some of the quotations given in the box. 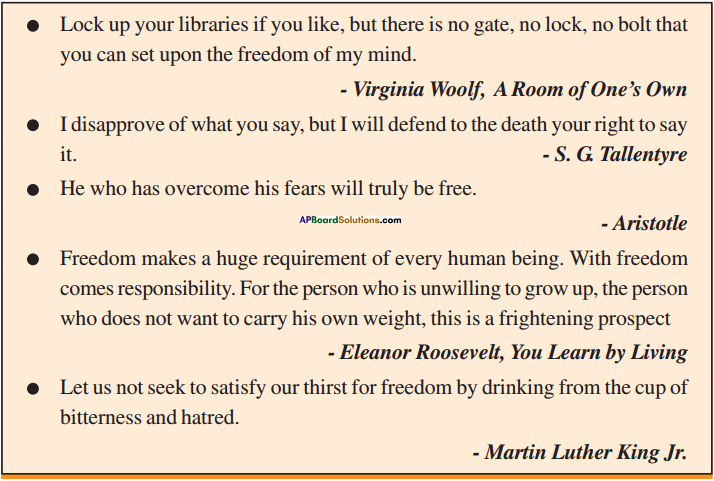 Answer:
Respected teachers, elders and guests and my dear friends! A very brilliant morning and warm greetings of our greatest day of days to you all.

We breathe this cool morning the inspiring air of freedom. Today we stand in the protective shelter of our tricolour flag as it flies high in the sky and proclaims to the world the great achievement of Indians! But the flag also reminds us of the selfless sacrifice thousands of Indians made to gift us this invaluable independence. The flag, at the same time, advises us to be mindful of our responsibilities.

As we celebrate this great event in the lap of goddess of learning, shouldn’t we pledge to follow the path our national leaders have so brilliantly illuminated for us? As the present students and future citizens, shall we plan for our future and our mother India’s future too?

As you all know well, planning for future demands analysis of present. Are we, then, rellay free in its comprehensive sense? Are we, for example, free from fear? For, as Aristotle has well said, “He who has overcome his fears will truly be free”. Are we really aware of and following Eleanor Roosevelt when he says, “Freedom makes a huge requirement of every human being. With freedom comes responsibility. For the person who is unwilling to grow up, the person who does not want to carry his own weight, this is a frightening prospect?” Are we really respecting freedom of expression? Do we follow

S.G. Talientyre’s mantra in this regard? The mantra is : “I disapprove of what you say, but I will defend to the death your right to say it.” Are we free from hatred and jealousy? Shouldn’t we put into practice Martin Luther King’s (Jr) wise advice – Let us not seek to satisfy our thirst for freedom by drinking from the cup of bitterness and hatred – even after independence? Are we allowing our innate nature to move ahead in its own way? Do we prove Virginia Woolf right in the saying – Lock up your libraries if you like, but there is no gate, no lock, no bolt that you can set upon the freedom of my mind?

The present picture is full of challenges. Illiteracy, poverty, corruption, pollution, fast depleting natural resources – the list is too long to complete here. It haunts us day and night. Let us all work together to solve these burning problems. Let us empower ourselves first to be able to work for Mother India! Let us hope to see Mother India full of smiles! Thank you all for your encouraging attention. Jai Hind I

Collect information about the great leaders who fought for the freedom of our country. Arrange the information in the table given below:

Discuss in groups and write down the questions you will need to get the information.

On the basis of the information collected in the table below, write a brief biographical sketch of any one of them and present it before others in class. 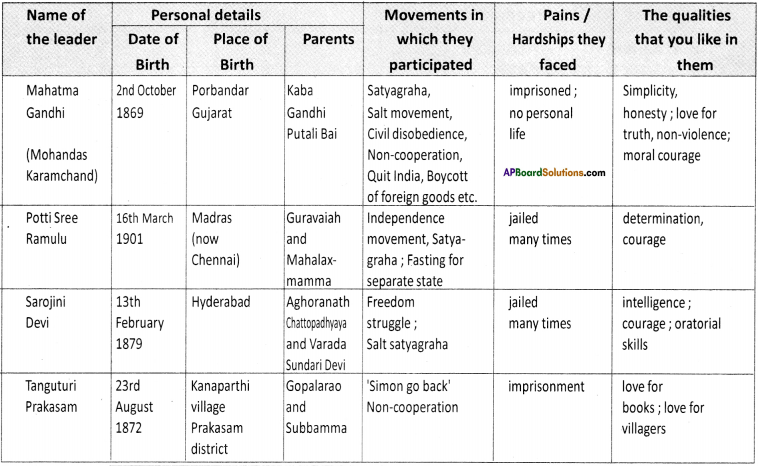 Sarojini Devi was born on 13th February 1879 in Hyderabad to Aghoranath Chattopadhyaya and Varada Sundari Devi.

She passed matriculation when she was just 12. Then she went to England for higher studies in King’s college in London and later at Cambridge.

She married Mutyala Govindarajulu Naidu in 1898. Kandukuri Veeresalingam acted as the priest on the occasion.

Gopala Krishna Gokhale influenced and guided Sarojini Naidu into Freedom Struggle. She met Gandhiji in 1915 and Nehru in 1916 for the first time. She took a very active part in Congress activities and Independence movements. She inspired many men with her poetic recitals which won for her the title ‘Nightingale of India’, Recognizing her important role, Congress leaders made her the party president in 1925. But the British government imprisoned herforthe same role.

After India became independent, she was made the governor of United Provinces (now Uttar Pradesh), the first Indian woman to become so. People remember her as a patriot, poet, philospher and lover of peace. She remains a source of inspiration to many persons-particularly women.

An Icon of Civil Rights Summary in English

Martin Luther King (Junior) is one of the most influential and inspiring Afro-American leader. His Nobel Prize acceptance speech is noted for its excellent content and effective expression. He accepts the Nobel Prize on behalf of the Civil Rights Movement in America. He remembers the suffering of blacks in the USA. He praises the Indians for showing the path of non-violence. He believes in the power of truth and love. He is hopeful of bright future for humanity. He has faith in man’s ability to lay a super highway of justice on which all people will cooperatively go ahead and create a world where every body gets food, mind finds education and spirit receives dignity, equality and brotherhood. He says faith gives us courage and confidence to complete the mission of establishing universal brotherhood that has roots in love, truth and peace.

An Icon of Civil Rights Glossary

determination (n) : firmness in continuing to do something despite difficulties

sanctuary (n) : a place that is safe

unrelenting (v+ing : adj) : not stopping and not becoming less severe

sterile (adj) : not capable of producing

elegy (n) : a poem or song about sad feelings

psalm (n) : a song praising god (Note that the letters ‘p’ and T are silent.)

revenge(n) : causing suffering to others because the caused suffering

retaliation (n) : action against someone because they harmed

alliances (n-plural) : groups working together to achieve what they want

despair (n) : the feeling of losing all hope

flotsam and jetsam (phrase-noun) : useless things, persons with no job, no home

cynical (adj) : not believing that something good will happen

redemptive (adj) : that saves from evil

dreary (adj) : that which makes one dull, bored