Question 1.
Answer the following:
i) How many dimensions a solid has ?
Solution:
A solid has three dimensions namely length, breadth and height or depth.

ii) How many books are there in Euclid’s Elements ?
Solution:
There are 13 volumes in Euclid’s elements.

iii) Write the number of faces of a cube and cuboid.
Solution:
Cube : 6 faces
Cuboid : 6 faces

Question 2.
State whether the following statements are true or false. Also give reasons for your answers.
a) Only one line can pass through a given point
b) All right angles are equal
c) Circles with same radii are equal
d) A finite line can be extended on its both sides endlessly to get a straight line

e) From figure AB > AC
Solution:
a) Only one line can pass through a given point – False.
Reason : (Since, infinitely many lines can pass through a given point)
b) All right angles are equal – True.
c) Circles with same radii are equal – True.
d) A finite line can be extended on its both sides endlessly to get a straight line – True.
e) From figure AB > AC – True.

Δ ABC is the required triangle.

Question 6.
What is a conjecture? Give an example for it.
Solution:
Mathematical statements which are neither proved nor disproved are called conjectures. Mathematical discoveries often start out as conjectures. This may be an educated guess based on observations.
Eg : Every even number greater than 4 can be written as sum of two primes. This example is called Gold Bach Conjecture

Question 7.
Mark two points P and Q. Draw a line through P and Q. Now how many lines are parallel to PQ, can you draw ?
Solution:

Infinitely many lines parallel to PQ can be drawn.

Question 8.
In the figure given below, a line n falls on lines / and m such that the sum of the interior angles 1 and 2 is less than 180°, then what can you say about lines l and m ? 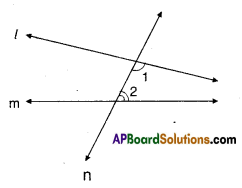