Question 2.
A sound of wavelength 0.6 cm is travelling in air with a velocity of 300 m/s. Is this sound audible?
Answer:
We know that v = nλ

This sound is not in the audible range. Hence this is not audible.

Question 5.
How does the sound travel?
Answer:
Sound travels^in the form of waves.

Question 9.
When do we call a wave as transverse wave?
Answer:
If the particles of the medium vibrate perpendicular to the direction of wave, then the wave is called a transverse wave.

Question 10.
What is an echo?
Answer:
A reflection of sound, arriving at the listener in more than 0.1 sec after direct sound is called an echo.

Question 11.
What is reverberation?
Answer:
A reflection of sound, arriving at the listener, in less than 0.1 sec after direct sound is called reverberation.

Question 15.
Define a compression and a rarefaction.
Answer:

Question 17.
Define speed of a sound wave.
Answer:
The distance by which a point on the wave, such as a compression or rarefaction, travels in unit time is called speed of sound wave.

Question 18.
In which of the three media air, water, or iron sound travel the faster at a particular temperature?
Answer:
Sound travels faster in iron because speed of sound is maximum in solids then liquids and least in gases.

Question 23.
What is a nucleus?
Answer:
The small positively charged central part of an atom is called nucleus.

Question 24.
What is an orbit?
Orbit is the path of the electron around the nucleus.

Question 25.
What will the addition of a neutron to the nucleus of an atom do?
Answer:
It will increase the atomic mass of the atom.

Question 26.
Which constituent particles of the atom determine the following
a) size of the atom
b) change on the nucleus?
Answer:
a) Electrons.
b) Protons.

Question 32.
What is an anion?
Answer:
When an atom gains one or more electrons, it becomes negatively charged and is known as anion.

Question 33.
Give one example each of diatomie and triatomic molecules.
Answer:

Question 36.
Which subatomic particle is not present in an ordinary hydrogen atom?
Answer:
Neutron.

Question 39.
Name the shell of an atom which can accommodate a niaximum of a) 8 electrons b) 18 electrons.
Answer:
a) L-shell

Question 40.
Name the negatively charged particle present in the atones of all the elements.
Answer:
electron (e–).

Question 41.
Which part of an atom was discovered by Ruthorford’s alpha particle scattering experiment?
Answer:
Nucleus.

Question 42.
State the relative mass and charge of a proton.
Answer:

Question 43.
Name the radioactive isotope which is used in the treatment of cancer.
Answer:
Cobalt – 60.

Question 44.
Which radioactive isotope is used to determine the activity of thyroid gland?
Answer:
Iodine – 131 radioisotope

Question 46.
Which noble gas has less than 8 electrons in the valence shell of its atom?
Answer:
Helium.

Question 47.
What is the general name of the elements having 8 electrons in the valence of shell of their atoms?
Answer:
Noble gases.

Question 1.
How can you say that the sound waves are longitudinal?
Answer:

Question 3.
Deduce a relationship between time period and frequency of a sound wave.
Answer:

Question 5.
Define echo and reverberation.
Answer:
Echo :
A reflected sound arriving at the position of listener in more than 0.1 s after the direct sound is called an echo’.

Reverberation :
A reflection of sound, arriving at the listener in less than 0.1 s after the direct sound is called reverberation’.

In megaphone and a horn, a tube followed by a conical opening reflects sound successively to guide most of the sound waves from the source in the forward direction towards the audience.

Question 7.
Describe the working of a stethoscope.
Answer: 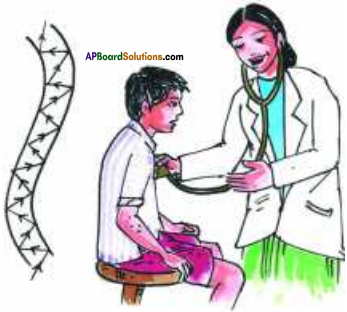 Question 8.
How the concert hails and cinema halls are designed to use multiple reflections of sound?
Answer:

Generally the ceilings of concert halls, conference halls and cinema halls are designed such that the sound after reflection reaches all corners of the hall as shown in the figure.

In some halls, a curved ceiling is arranged in such a way that the sound after reflecting from the ceiling spreads evenly across the hall.

Question 9.
What are the medical applications of ultrasound?
Answer:
1) Imaging of organs :
Ultrasonics are useful in Electro Cardio Graphy (ECG) to form an image of heart.

Ultrasonography is used in the formation of images of organs such as liver, gall bladder, uterus, etc. to identify the abnormalities and tumors. Ultrasonography is also used to monitor the growth of a foetus inside the mother’s womb.

2) Surgical use of ultrasound :
Ultrasounds are used in cataract removal, breaking up of stones in kidneys, etc. without surgery.

Question 10.
Show the frequencies of various musical notes in a table.
Answer:
In musical terms, the pitch of the note determines the position of the note on the musical scale which is denoted as :

The tuning fork set is prepared based on the above frequencies.

Question 11.
Draw a diagram to show wavelength and amplitude of a wave.
Answer:

Question 12.
Calculate the wavelength of a sound wave whose frequency is 220 Hz and speed is 440 m/s in a given medium.
Answer:

Question 16.
A person has hearing range from 20 Hz to 20 KHz. What are the typical wavelength of sound waves in air corresponds to these two frequencies? Take speed of sound in air as 344 m/s.
Answer:

Question 17.
A sound wave travels at a speed of 339 m/s. If its wavelength is 1.5 cm. What is the frequency of the wave? Will it be audiable?
Answer:

Question 19.
Fill in the following blanks in respect of an atom of an element.

Question 22.
Fill in the following blanks.

Question 23.
Write the three isotopes of carbon and hydrogen.
Answer:

Question 1.
“Sound travels in the form of waves”. Justify your argument.
Answer:

Question 2.
Mention the industrial applications of ultrasonic waves.
Answer:
1) Drilling holes and making cuts of desired shapes :
a) Holes can also be drilled using ultrasonic vibrations.
b) Ultrasonic cutting and drilling are very effective for fragile materials like glass, etc.

2) Ultrasonic cleaning :
a) Ultrasonics help in cleaning the parts located in hard-to-reach places.
b) The high frequency ultrasonic vibrations knocks off all dirt and grease particles from the objects.

3) Ultrasonic detection of defects in metals :
The defects in the metallic structures, which are not visible from the outside, can be detected by ultrasonic waves.

Question 4.
Draw the graphical representation of sound wave produced by a tuning fork, a violin and a piano playing the same note with equal loudness.
Answer: 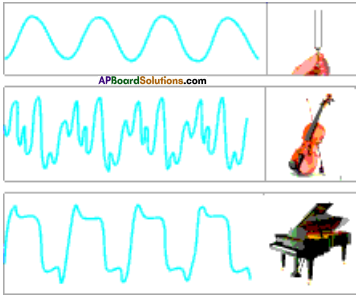 Question 5.
Composition of the nuclei of two atomic species X and Y are given as under.

b) Since X and Y both have atomic numbers as 6 but mass numbers are different.
∴ These are isotopes to each other.

Question 6.
How will you find the valency of Magnesium, Sulphur, and Chlorine?
Answer:
Electronic configuration

Question 7.
For the symbol H, D and T tabulate three sub-atomic particles found in each of them.
Answer:

Question 8.
Draw a sketch of Bohr’s model of an atom with three shells.
Answer: 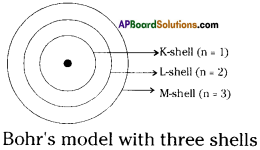 Question 10.
Draw the diagrams of the three isotopes of hydrogen and label the parts.
Answer: