The required centripetal force is provided by the friction between the tyres of the car and the road.

Question 3.
A small metal washer is placed on the top of a hemisphere of radius R. What minimum horizontal velocity should be imparted to the washer to detach it from the hemisphere at the initial point of motion? (AS 1, AS 7) 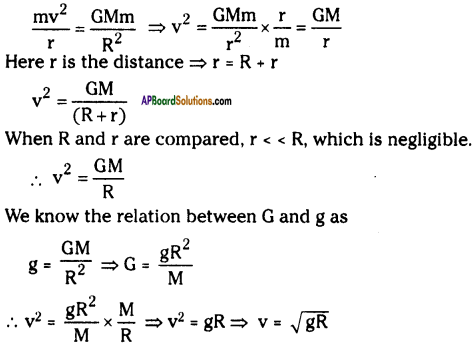 Question 4.
Explain why a long pole is more beneficial to the tight rope walker if the pole has slight bending. (AS 1, AS 7)
Answer:

Question 5.
Why is it easier to carry the same amount of water in two buckets, one in each hand rather than in a single bucket? (AS 7)
Answer:
It is because in the later case centre of gravity of our body shifts towards the bucket and there is a tendency that the line joining the centre of gravity and centre of equilibrium may fall outside our feet.

However in the former case the centre of gravity not only gets lowered, but also it is at such a point that line joining the C.G. and C.E. falls within our feet.
Hence one is a stable equilibrium. 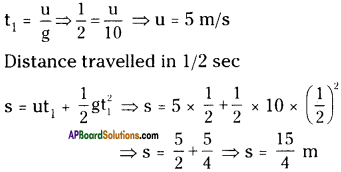 Question 9.
A man is standing against a wall such that his right shoulder and right leg are in contact with the surface of the wall along his height. Can he raise his left leg at this position without moving his body away from the wall? Why? Explain. (AS 7)
Answer: 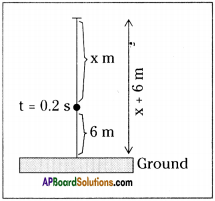 Question 11.
A ball is dropped from a balloon going up at a speed of 5 m/s. If the balloon was at a height 60 m. At the time of dropping the ball, how long will the ball take to reach the ground? (AS 1, AS 7)
Answer:
At t = 0, the stone was going up with a velocity of 5 m/s. After that it moves as a freely falling body, with downward acceleration ‘g’.
If it reaches the ground at time t1,

Question 13.
Two cars having masses m1 and m2 move in circles of radii r1 and r2 respectively. If they complete the circle in equal time. What is the ratio of their speeds and centripetal accelerations? (AS 1)
Answer:
Masses of cars : m1 and m2; Radius of circles : r1 and r2
Given that their time period is equal. 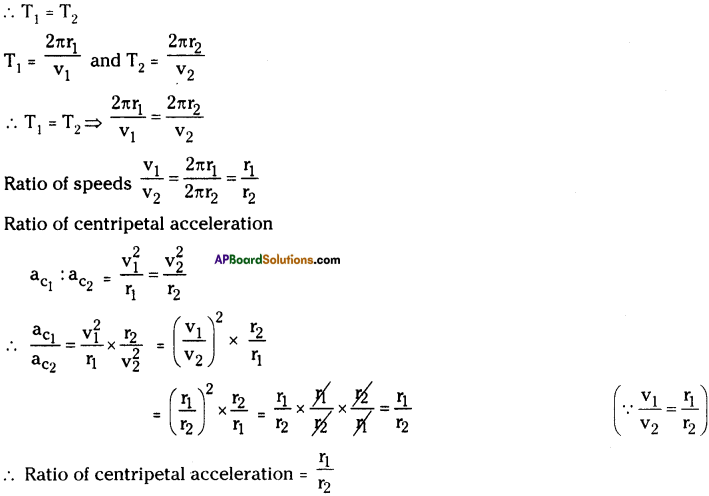 Question 17.
An apple falls from a tree. An insect in the apple finds that the earth is falling towards it with an acceleration g. Who exerts the force needed to accelerate the earth with this acceleration? (AS 7)
Answer:

∴ A centripetal force of 500 N is required on the car.
This force is provided by the friction between the tyres of the car and road.

Question 20.
How can you find the centre of gravity of India map made with steel? Explain. (AS 3)
(OR)
Describe an activity to know the center of gravity of a India map.
Answer: 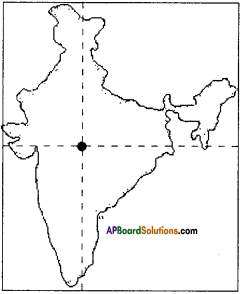 Question 21.
Explain some situations where the center of gravity of man lies out side of the body. (AS 1)
Answer:
Centre of gravity of a human being is located interior to the second sacral vertebra.
Centre of gravity of man lies out side the body in the following situation :
a) While doing sit-ups.
b) While carrying a load like bucket full of water with one hand.
c) While walking on a narrow base like walking on a rope or pole or narrow wall, etc.
d) While walking with one leg.
e) As age increases its position changes.

Question 23.
Where does the center of gravity lie, when a boy is doing sit-ups? Explain. (AS 7)
Answer:

Question 1.
What is that force?
Answer:
The force acting on these objects to make them move around another object, instead of moving in straight line in the gravitational force.

If the velocity is not constant, the time period changes from time to time and it cannot be treated as uniform circular motion.

Question 6.
Do you know what questions arose in his mind from this observation?
Answer:
When apple fell to the ground, Newton might have thought like this:
a) Why did the apple fall on the earth?
b) Why doesn’t the apple go up in the sky?
c) Whether all the objects fall to ground ?
d) What makes them to fall on the ground?

Question 10.
How do you feel during the free-fall of your body from the height?
Answer:

Question 12.
Can an object moVe along a curved path if no force acts on it?
Answer:

Question 14.
Calculate the tension in a string that whirls a 2 kg – toy in a horizontal circle of radius 2.5 iv when it moves at 3 m/s.
Answer:
Mass of the toy m = 2 kg ; Radius of the circle = 2.5 m ; Speed of the toy = 3 m/s
As the toy is moving in a horizontal circle, the necessary centripetal force is provided due to the tension in the string.

Question 15.
In figure, we see that the moon falls around earth rather than straight into it. If the magnitude of velocity were zero, how would it move? 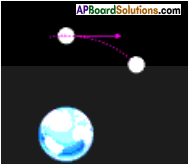 Answer:
If the magnitude of velocity were zero, the moon would move towards earth due to acceleration due to gravity.

Question 16.
According to the equation for gravitational force, what happens to the force between two bodies if the mass of one of the bodies doubled?
Answer:

∴ The gravitational force will be doubled.

Question 17.
If there is an attractive force between all objects, why we do not feel ourselves gravitating toward massive buildings in our vicinity?
Answer:

Question 20.
Give an example for the motion of an object of zero speed and with non-zero acceleration?
Answer:
Protons and neutrons inside the nucleus.

Question 22.
When is your weight equal to mg?
Answer:
When we are on the surface of the earth, our weight is equal to ‘mg’ on earth.

Question 23.
Give example of when your weight is zero?
Answer:

2) Centre of gravity of a triangular lamina lies where the whole mass of the triangle is assumed to be concentrated which is centroid.

Question 26.
Why doesn’t the leaning tower of Pisa topple over?
Answer: 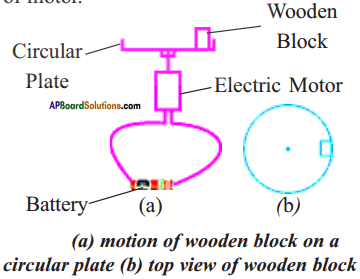 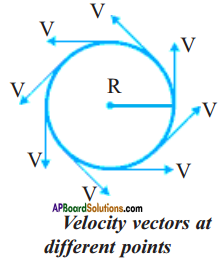 9) As the vertex angle of isosceles triangle decreases, the angle between the change in velocity approaches to 90°.

10) Therefore, the acceleration of a body in uniform circular motion is directed perpendicular to its velocity.

b) Drop the book and paper separately, what happens?
Answer:
Book reaches the ground first, then the paper reaches.

Question 4.
What is the direction of ‘g’?
Throw a stone vertically up. Measure the time required for it to come back to earth’s surface with stop clock.

a) What happens to its speed when it moves up and down?
Answer:

b) What is the direction of acceleration?
Answer:

Question 5.
Describe the method of measuring the weight of a free fail body.
Answer: 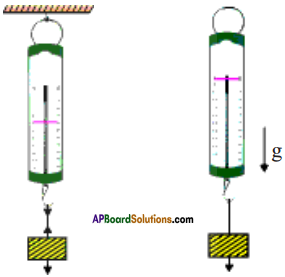 Question 6.
How do you demonstrate the changes during the free-fall of a body?
Answer:

Question 7.
Give one activity that showing center of gravity and balancing.
(OR)
How do you balance spoon and fork?
Answer: 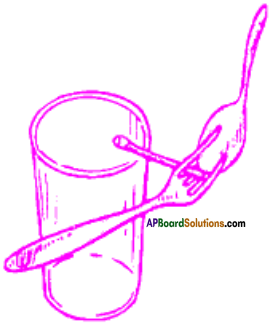 Question 8.
Can you get up without bending?
Sit in a chair comfortably as shown in figure. Try to get up from the chair without bending your body or legs. 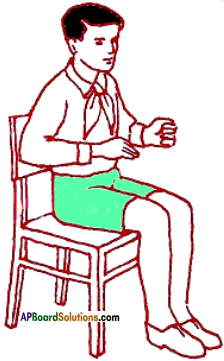 Question 9.
How do you balance a ladder on your shoulder?
Answer:

Question 10.
How can you locate the centre of gravity of a uniform object?
Answer: 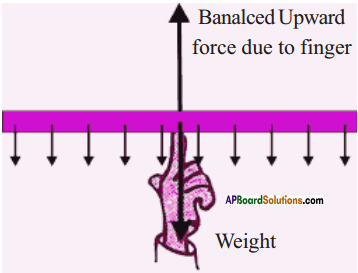 Question 11.
Identifying the centre of gravity of a ring.
The center of gravity of any freely suspended object lies directly beneath the point of suspension. 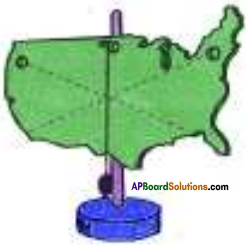 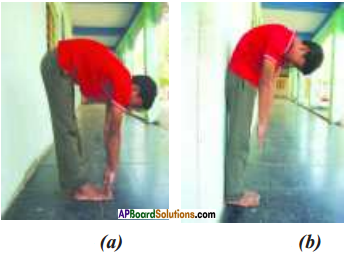 a) Are you able to touch your toes in second case as shown in figure? If not why?
Answer:

b) What difference do you notice in the center of gravity of your body in above two positions ?
Answer: