Question 3.
An ice cube floats on the surface of a glass of water (density of ice = 0.9 g/cm3). When the ice melts will the water level in the glass rise? (AS 1)
Answer:
Yes, the water level rises.

Reason :
The ice cube floats on water, because its density is less than the density of water. When ice cube melts, it becomes water, so that the water level rises.

Question 4.
The volume of 50 g of a substance is 20 cm³. If the density of water is 1 g/cm³, will the substance sink or float when placed on the surface of water? What will be the mass of water displaced by the substance? (AS 1)
Answer:

∴ Weight of the water displaced by the substance = 20 g

Question 6.
Why do some objects float on the water? And some sink? (AS 1)
Answer: 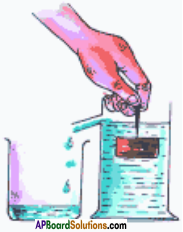 Question 10.
Which is denser, water or milk? (AS 2)
Answer:
The density of water is 1 gm/cc and that of milk is 1.02 gm/cc. Hence milk is slightly denser than water.

Question 13.
How can you appreciate the technology of making ships float, using the material which sink in water? (AS 6)
Answer:

Question 14.
Can you make iron float? How? (AS 3)
Answer:
Yes, we can make iron to float on water.
Procedure:

Materials required :
Small bottle of 50 ml capacity (the bottle should weigh not less than 10 gm), spring balance, any liquid (milk or oil or kerosene) about 50 ml.

Question 16.
Find the relative density of different fruits and vegetables and make a list. (AS 3)
Answer:

Question 17.
Make a lactometer with ball point refill. What would you do to make the refill stand vertically straight? (Activity – 2) (AS 5)
Answer:

Question 18.
Draw the diagram of a mercury barometer. (AS 5)
Answer: 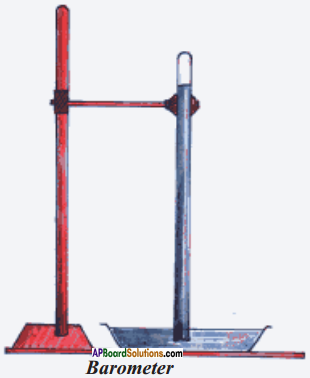 Question 19.
Write a note on Pascal’s discovery in helping to make hydraulic jacks. (AS 6)
Answer:
Pascal’s principle:
External pressure applied to an enclosed body of fluid is transmitted equally in all directions throughout the fluid volume and the walls of the containing vessel.

Question 20.
Write a note on Archimedes discovery of force of buoyancy. (AS 6)
Answer:
Archimedes principle:
When a body is immersed in a fluid, it experiences an upward force of buoyancy equal to the weight of fluid displaced by the immersed portion of the body.

Use :
The principle is used to determine the purity of metals.

Question 22.
Iron sinks in water, wood floats in water. If we tie an iron piece to wood piece of the same volume, buritlle and drop it in water, would bundle sink or float? Make a guess and find out whether your guess is correct or wrong with an experiment. Give reasons. (AS 2, AS 3)
Answer:
The body sinks in water.

Reason :
The combined mass of the system increases, so the combined density also increases. Hence the body sinks in water.

Question 23.
Air brakes in automobiles work on Pascal’s principle. What about air brakes? Collect the information about the working process of air brakes. (AS 4)
Answer: 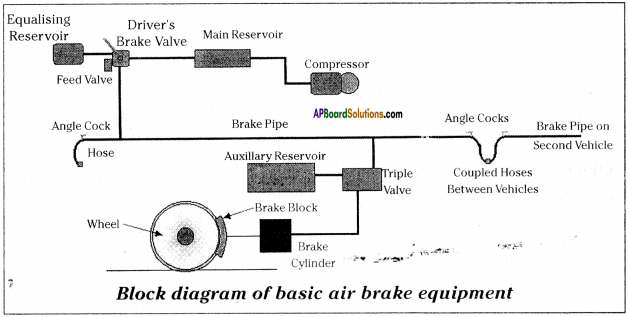 e) Draw a diagram of the tube, showing the results of your activity.
Answer: 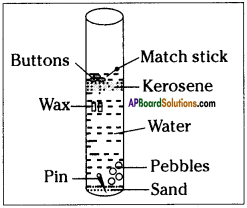 3) Which is denser, rubber or plastic?
Answer:
Rubber is denser than plastic.

4) Which is denser, wood or cork?
Answer:
Wood is denser than cork.

5) Do objects that have a relative density less than 1 Sink in water or float on it?
Answer:
Float on water.

6) Do the objects that sink in water have a relative density less than 1 or more than 1?
Answer:
More than 1.

2) If we put a wooden block in kerosene, will it float or sink? Give reasons for your answer.
Answer:

3) A piece of wax floats in water but the same piece of wax sinks in a liquid say liquid ‘X’. Will the relative density of liquid . ‘X’ be less than 1 or greater than 1? How can you say?
Answer:

5) If we take two bottles of equal volume and pour pure milk in one and milk mixed with water in the other, which one will be heavier?
Answer:

Question 5.
What happens if we replace this cylindrical liquid column with another object which is made up of a material whose density is equal to the density of liquid?
Answer:
We know that the pressure difference in the liquid,
P2 – P1 = hρg

Question 6.
Why does the stone lose weight when it is immersed?
Answer:

Question 8.
a) What would happen if Toricelli’s experiment is done on moon?
b) A stopper is inserted in the small hole of the glass tube of the mercury barometer below the top level of the mercury in it. What happens when you pull out the . stopper from the glass tube?
c) Why don’t we use water instead of mercury in Toricelli experiment? If we are ready to do this experiment, what length of tube is needed?
d) Find the weight of the atmosphere around the earth (take the radius of earth as 6400km)
Answer:
a) If Toricelli’s experiment had been done on moon, the height of mercury column will be zero. Because there is no atmosphere on the moon.

Question 9.
a) Why is it easier for you to float in saltwater than in freshwater?
b) Why is there no horizontal buoyant force on a submerged body?
c) Two solid blocks of identical size are submerged in water. One block is iron and the other is aluminium. Upon which is the buoyant force greater?
d) A piece of iron when placed on a block of wood, this makes the wood to float lower in the water. If the iron piece is suspended beneath the wood block, would it float at the same depth? Or lower or higher?
Answer:
a) Salt water is denser than freshwater.
b) Buoyant force is the upward force only. The body is submerged means, its weight is more than the buoyant force. Here there will be no horizontal buoyant force.
c) Buoyant force on iron block is more than that of aluminium block.
d) It floats on higher depth than in the first case.

Question 1.
Comparing density – relative density.
Take two test tubes of the same size and fill one to the brim with water and the other with oil.
a) Which will weigh more?
Answer:
The test tube with oil will weigh more.

b) Which liquid is denser?
Answer:
Oil is denser than water.
Take two equal sized blocks made of wood and rubber.

c) Which of these two blocks is heavier?
Answer:
Wooden block is heavier.

d) Which one is denser?
Answer:
Wooden block is denser than rubber.

Question 2.
Do the objects denser than water float in it? Prove it with an activity.
Answer: 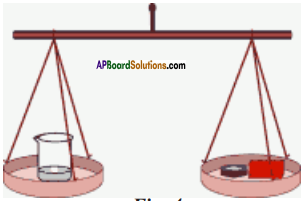 Question 4.
Explain how does metal aluminium floats on the water with an activity.
Answer: 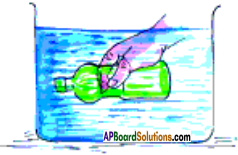 Question 6.
Describe an activity to observe the air pressure.
Answer: 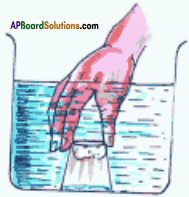 Question 7.
How can you measure the force of buoyancy and how much?
(OR)
Why does and stone lose weight when it is immersed in water?
Answer: 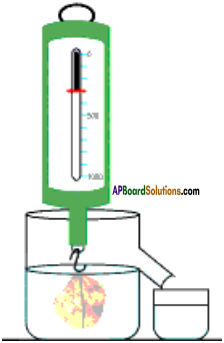