Question 2.
Give any one reason for the following. (SA-I : 2019 – 20)
Answer:
The majority of Earth’s volcanoes and earthquakes take place along the pacific basin. A. Plate boundaries are found all the way around the pacific basin.

b) What are the factors that cause their formation?
Answer:
Water, wind, glaciers and waves.

Erosion :
Flowing water and wind have great power and can slowly wear away or cut away the rocks and soil cover in higher places. Water acts in many ways, as rain, river, flowing ground water, sea waves, glaciers etc. Wind too takes many forms like storms, gusts etc.

The active wearing away of the earth’s surface by these moving agents is called erosion.

Transportation :
The eroded material in the form of small rocks, gravel, mud fine soil etc. carried by winds and water is called transportation.

Deposition :
When the rivers and winds slow down, they do not have the force to carry the material any more and they dump them. This dumped debris help to form plains and river basins.

1. Lithosphere:
The hard top part of the earth, the solid crust, which is made up of rocks and minerals and covered with a thick layer of soil. Soil is called lithosphere. It has high mountains, plateaus, plains, deep valleys and oceans. We and most other living beings live on this realm.

2. Hydrosphere :
The realm of water is called hydrosphere. It comprises various sources of water and different types of water bodies like rivers, lakes, seas, oceans, etc. and in the atmosphere in the form of water vapour and clouds. Life on earth is not possible without water.

3. Atmosphere :
The thin layer of air that surrounds the earth is atmosphere. It consists of a large number of gases including oxygen, nitrogen, carbon dioxide, water vapour, etc. and also dust particles. This cover of air is held around the earth by its gravitational force and rotates around the sun with the Earth.

4. Biosphere :
The realm of life including bacteria which live high on atmosphere or in deep oceans constitutes the biosphere. Life needs the presence of all the three realms, land, water and air. So life resides in the intersection of the three natural realms. Life also actively changes the three other realms.

Question 2.
What are called plates? How many plates are there on the earth?
Answer:
The massive base of rocks on which all the continents and even the oceans are actually situated are called plates. There are six major plates and several minor ones on the Earth. The African, North American, South American, Indo-Australian, Antarctic, Eurasian, and Pacific are the major plates. Nazca and Arabian are some among the minor plates.

Question 3.
What are plate tectonics? How are they caused?
Answer:

Question 5.
How is the river deposition useful to man?
Answer:

Thus the deposition of rivers are useful to man.

1. Sand Dunes :
Due to weathering and persistent wind action there is a large accumulation of fine sand in many deserts. These form ‘sand dunes’.

2. Mushroom Rock :
Winds erode the lower section of the rocks more than the upper part. Therefore such rocks have narrower bottom and wider top like mushrooms. So they are called mushroom rocks.

3. Inselberg:
The isolated residual hills rising abruptly from the ground are called inselberg or Island Mountain. They are characterized by their very steep slopes and rather rounded tops.

4. Loess Plains :
a) The fine dust, which is fertile and yellow in colour, is blown beyond the deserts and is deposited on neighbouring land. This soil is called Loess. Loess are in fact fine loam, rich in lime and extremely porous.
b) The plains formed by deposition of loess are called Loess Plains.

Question 7.
Name the landforms due to the Glacier action.
Answer:
1. Slow moving of mass of ice (a river of ice) is called Glacier.
2. A Glacier erodes through a process called “Plucking” in which it lifts pieces of rock and transports them.
3. The landforms created due to Glacier’s action are :
a) U shaped Valley:
Through the dual process of plucking and abrasion, glaciers create a “U shaped Valley”.

b) Moraines :
Pebbles, cobbles, sand etc., may be deposited at various parts of the
glaciers. The deposition of this till is called moraines. –

d) Ozone :
Ozone is an inorganic molecule with the chemical formula 03. It is a pale blue gas with a distinctively pungent smell. Ozone’s 03 formula was determined in 1865.

Question 12.
What is Lithosphere?
Answer:
Lithosphere is the solid crust or the hard top part of the Earth. It is made up of rocks and minerals. It is covered with a thick layer of soil.

Question 16.
How is lithosphere useful to mankind?
Answer:

Question 17.
What is the impact of vegetation on lithosphere?
Answer:

Question 18.
Which processes cause the formation of ‘Third Order landforms’?
Answer:

Question 19.
What do you mean by geomorphic cycle?
Answer:

Question 20.
How are gorges formed?
Answer:

Question 21.
What is a canyon?
Answer:

Question 22.
How ocean rocks or crust are formed?
Answer:
These are formed by lava rising up from the mantle. The eruptions on the ridges create new ocean floor made of basalt rocks, which then spreads laterally from the ridge. The first order landforms such as oceans and continents are formed at the time when the hot earth was cooling. While the earth’s interior continued to cool, it contracted and the outer crust wrinkled forming ridges i.e., mountains and basins i.e., oceans.

Question 23.
What are the four main “realms” of the earth? Explain how a cement factory world impact the various “realms”.
Answer:

Question 25.
What are the two kinds of changes happening in the Lithosphere?
Answer:

Question 28.
List out landforms originated due to the work of waves.
Answer:

Question 29.
From which Greek word is the word Hydrosphere derived?
Answer:
It comes from the Greek word ‘hudor’ meaning water.

Question 32.
What is weathering?
Answer:
The gradual disintegration of rocks by atmospheric forces or weather forces is called weathering.

Question 33.
What is erosion?
Answer:
The active wearing away of the earth’s surface, by different agents, is called erosion.

Question 34.
“The Earth is a deeply interconnected system” – Interpret the statement.
Answer:
The Earth consists of four major realms.

All these four are interrelated. All these four spheres together help the birth, existence, and continuance of life on Earth. Life needs the presence of all the other three realms land, water, and air. Life resides in the intersection of the three natural spheres. Life also actively changes the three other realms.

We cannot think of one realm without the crucial role of others. We cannot tamper with one aspect of it without affecting everything around us including ourselves. Thus we can say that the Earth is a deeply inter connected system.

Question 35.
“One day in very distant future the land you are standing upon will go under the Himalayas” – Interpret the above statement.
Answer:
At the margins of the plates where one plate meets another often the incoming plate dips under the stable plate. In fact the incoming plate actually goes into the mantle of the earth and becomes molten due to the heat of the mantle.

The plate thus going under into the mantle actually pulls the rest of the plate with it. For example, the Indian plate pushes the Eurasian plate and goes under if where the Himalayan mountains are.

Thus one day in very distant future the land we are standing upon will go under the Himalayas and join the mantle.

Question 36.
“The low lands what we see today were once mountains and plateaus” – Explain.
Answer:
External forces like water and air work vigorously to wear away the surface and the interaction of these constructive and destructive forces gives rise to the great diversity of present day landforms. These external processes on one hand wear away the surface of the rocks and mountains then they transport the wornout particles and deposit them in low lands and basins.

The processes of wearing away and deposition cause a general leveling of the surface. Processes like weathering, erosion, transportation and deposition are largely responsible for these landforms. It is known as denudation process.

Denudation is a continuous process. The landforms continuously keep on changing due to denudation activities. But these changes occur very slowly. Thus the low lands what we see today were once mountains and plateaus.

Question 37.
Read the paragraph and answer the following questions.
In some cases, where the rocks are very hard, the river cuts a very narrow valley, the sides are so steep that ‘Gorges’ are formed. The Byson gorge in A.P. on the Godavari, Indus Gorge in Kashmir are examples of this. Another important erosion form is Canyon. A Canyon is characterized by steep side slopes and may be as deep as a gorge. A gorge is almost equal in width at its top as well as its bottom.
1) Write any two similarities between gorges and canyons?
Answer:
a) It is as deep as gorge.
b) Both are formed with work of water.

2) Write any two differences between gorges and canyons?
Answer:
a) Canyon has a steep like side slope whereas gorge is too steep without side slope.
b) Canyon is wider at the top than at the bottom. Whereas Gorge is almost equal in width at its top as well as at its bottom.

3) Give an example of canyon.
Answer:
The Grand canyon on river Colorado.

4) How are gorges useful ?
Answer:
Gorges are suitable for construction of dams.

Question 39.
1. Locate different continents and oceans on the given world map.
Answer: 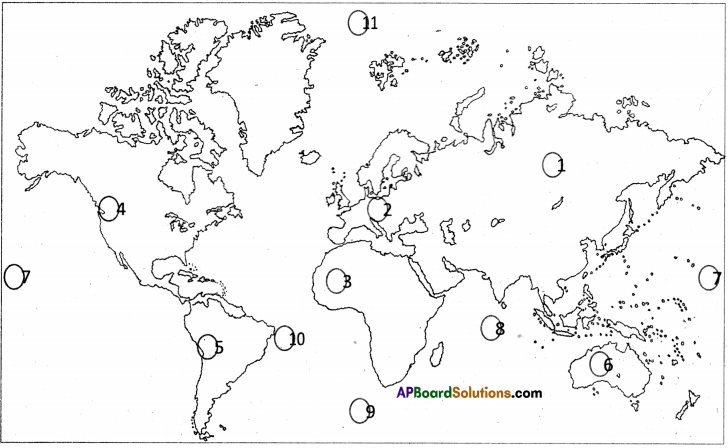 Question 40.
Observe the map and answer the following questions. 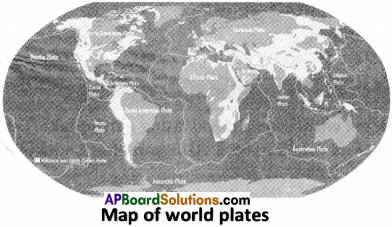 Which parts of India lie near plate margins?
Answer:

Question 41.
Label the patrs to the given diagram.
Answer: 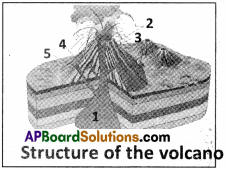 In the high mountains, the flow of a river is very swift as it descends the steep slopes and it exerts a great force in cutting the mountain vertically. As a result a deep valley develops, narrow at the bottom and wide at the top. Thus V-shaped valleys are formed.

Question 43.
Appreciate the benefit with the eruption of a volcano?
Answer: