Question 2.
Find the odd one out in the context of lithosphere and give reasons for your choice.
Byson gorge; Grand Canyon; Ozone; Thar desert.
Answer:
Out of these four ozone is the odd one.
Reasons:

Question 3.
How is the Lithosphere formed?
Answer:

Question 4.
How are the continental plates formed and how are they eventually destroyed?
Answer:

Question 5.
List out the landforms formed due to the river work. (AS1)
Answer:
Many landforms are formed due to the work of the river. They are
1. V – shaped valley:
The flow of a river is very swift as it descends the steep slopes and it exerts a great force in cutting the mountain vertically. As a result a deep valley develops, narrow at the bottom and wide at the top. This is called V – shaped valley.

2. Gorge:
Where the rocks are very hard, the river cuts a narrow valley with steep sides called Gorges.

3. Canyon:
A deep valley with steep like slopes and is wider at its top than at the bottom is called a Canyon.

4. A plunge pool:
The water falls with great force and dig out the rock beneath to form a plunge pool.

5. Plain:
When the river is in floods it cuts the soil and when it is not in flood it deposits silt and thus forms vast flood plains.

6. Meanders:
As a result of the deposition by floods the river bed becomes too high, the river constantly changes its course and cuts new path and forms gentle snake like meanders.

8. Delta:
When a river reaches the sea, the fine material is deposited at its mouth forming a delta (∆).

9. Ozone:
Ozone is an inorganic molecule with the chemical formula 03. It is a pale blue gas with a distinctively pungent smell. Ozone’s 03 formula was determined in 1865.

Question 6.
Create a table as given below and fill information. And write a small paragraph to explain the similarities and differences you can think of in the context of earth’s external changes, (if there is no information available in the text, leave those columns blank)

Answer:
Wind:
Wind takes many forms and carries away the surface of the land in the higher places.

Two forces, weathering and erosion, are constantly at work building up and moving rocks making up the earth’s crust.

Weathering causes rocks to fragment, crack, crumble, or break down physically and chemically.

Erosion loosens and carries away the rock debris formed by weathering. Over time these two forces, working together, change the shape of the land.

Question 7.
Why are Glaciers not found in your surroundings?
Answer:
Glaciers are most commonly found above snow line i.e., regions of high snow fall in winter and cool temperatures in summer. These conditions allow more snow to accumulate on the glacier in the winter that will melt in the summer. This is why most glaciers are found either in mountainous areas or the polar regions.

We are in the state of Andhra Pradesh. It is a semi-arid area and has a predominantly hot and dry climate. Summers start in March, and peak in May with average high temperatures in the 42°C range. A dry, mild winter starts in late November and lasts until early February with little humidity and average temperatures in the 22°C – 23°C range. In such hot and dry conditions glaciers are not formed. So we cannot find glaciers in our surroundings.

Question 8.
How are Beaches formed and name some Beaches?
Answer:
Formation of Beaches:

Names of some beaches :

Question 9.
How is the human lifestyle responsible for extension of deserts?
Answer:

Question 10.
Find out the order of the landforms for the following.

Question 12.
Read the para under the title ‘Erosion’ on page 20 and comment on it.

Answer:
Erosion is the process by which soil and rock are removed from the earth’s surface by exogenic processes such as wind or water flow, and then transported andsdeposited on their locations while erosion is a natural process. Human activities have increased by 10 – 40 times the rate of which erosion is occuring globally.

Question 13.
Collect newspaper or magazine articles and news on earthquakes and volcanoes.
Prepare an illustrated file on these – how do they happen and how they affect human life.
Answer:
Student’s activity.
Ex: Earthquakes:
The earth’s surface is formed of massive slabs of rock called plates. These are called tectonic plates, are always moving. Sometimes they just slide past one another. At another time they actually collide with one another. Plate movements cause the build up of tremendous quantities of energy in the rock. When the energy is released, it produces vibrations that travel through the rock, leading to earthquakes. During earthquakes, faults, or giant cracks, are produced by the pressure of moving rocks.

Volcanoes:
Deep within the earth it is so hot that some rocks slowly melt and become a thick flowing substance called magma. Because it is lighter than the solid rock around it, magma rises and collects in magma chambers. Eventually some of the magma pushes through vents and fissures in the earth’s surface. Then a volcanic eruption occurs.

Their effect on human life :

Question 1.
Why do you think the rock is harder inside than outside? (Text Book Page No. 20)
Answer:

Question 2.
Expalin how are the waterfalls are useful. (Text Book Page No. 22)
Answer:

ii) Impact of building cities with brick and cement on lithosphere:
Constructing buildings with cement and bricks has a lot of negative effects.

iii) Impact of agriculture on lithosphere:
Man has been trying to manipulate more and more of nature and exploit this natural resource by the unscientific practice of agriculture.

iv) Impact of dams on lithosphere :

Question 4.
Write an imaginary description of the damages that occur due to volcanic eruption in an area. (Text Book Page No. 19)
Answer:

Question 5.
Compare the Loess Plains with a Delta. What similarities and differences do you see between them? (Text Book Page No. 25)
Answer:
Similarities between Loess Plains and Deltas :

Differences between Loess Plains and Deltas:

Question 6.
Geologists have found fossils of sea animals on the Himalayas. Some of these are actually worshipped in many homes as ’Salagramas’. How do you think are these^ossil^here on the Himalayas? (Text Book Page No. 17)
Answer:

Question 8.
Collect some of the pictures of waterfalls. (Text Book Page No. 22)
Answer:
Pictures of famous waterfalls : 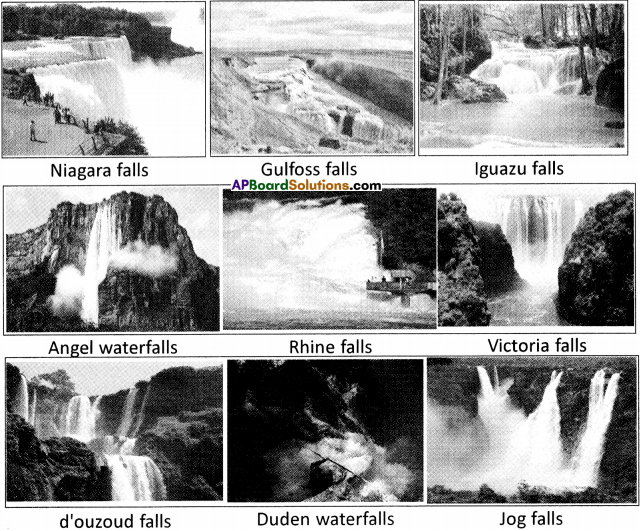 Question 9.
Gorges are suitable for construction of dams- can you tell why this is so? (Text Book Page No. 21)
Answer:

Question 10.
You have read about mining of minerals like baryte or coal. In what ways do you think does mining affects the lithosphere, hydrosphere and atmosphere? (Text Book Page No. 14)
Answer:

Question 11.
Human beings consume a lot of medicines like anti-biotics to cure sickness. How do you think does it affect the lithosphere, hydrosphere and biosphere? (Text Book Page No. 14)
Answer:

Question 12.
What are the dangers of living on the flood plains? (Text Book Page No. 23)
Answer:

Question 13.
Locate the Himalayas, Andes and Rockies mountains. Why were they formed in those locations? Suggest reasons. (Text Book Page No. 17)
Answer: 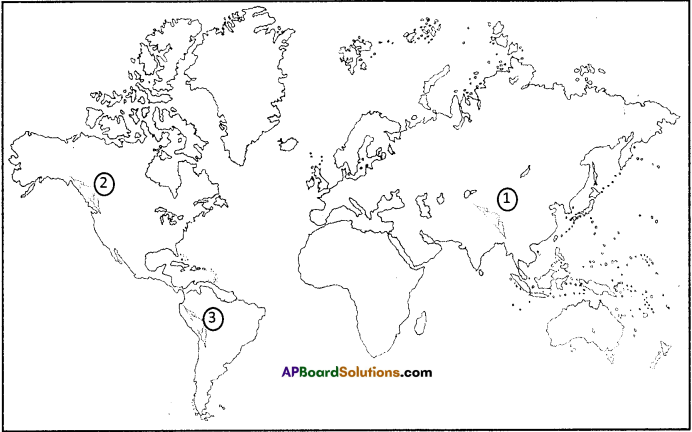 Question 14.
You may have noticed that many of the ‘scientific’ terms use Greek words. Why do you think do they use Greek words? Discuss with your teacher. (Text Book Page No. 14)
Answer:
In his communication a scientist is mainly concerned with exact and logical expression of that which he wishes to pass on to another. His purpose is to inform as clearly as possible. Each of his words must have a precise meaning and one meaning only so that there is no risk of confusion or ambiguity. The meanings of many ordinary words of our language are not single and precise. The use of words which are ‘set apart’ from everyday life also enables the scientist to avoid evoking irrelevant and distorting associations.

In addition to precision of meaning and freedom from associations most scientific words by their form and structure they reveal something of their meanings. Many scientific words are built from simpler word-elements usually of Greek origin. Some words are self-explanatory if the Greek roots are known.

Scientific language to be efficient must be universally intelligible. The classical language Greek is so fundamental to the civilised world. The words constructed from this language can easily be learnt to be translated.

Question 14.
Are all rocks on the earth formed in the mid-ocean ridges? (Text Book Page No. 17)
Answer:
No. All the rocks on the earth are not formed in the mid-ocean ridges. Only ocean rocks or crust are formed of the mid-ocean ridges. These are formed by lava rising up from the mantle. The eruptions on the ridges create new ocean floor made of basalt rocks, which then spreads laterally from the ridge. The first order landforms such as oceans and continents are formed at the time when the hot earth was cooling. While the earth’s interior continued to cool, it contracted and the outer crust wrinkled forming ridges i.e., mountains and basins i.e., oceans. The second order landforms such as plains, plateaus and mountains are formed as a result of the internal processes of the earth. The third order landforms such as carved mountains, valleys, deltas, sand dunes are formed as a result of the shaping of the land forms by wind, water.

Question 15.
Why do you think we don’t feel any of these mighty changes taking place on the earth? Is it because they don’t affect us? Do you think these changes affect us at all? (Text Book Page No. 17)
Answer:

Question 16.
Compare the action of the river in the mountains and in the plains. In what ways are they similar and different?
Answer:
Similarities :

From the mountains to delta, a river does not just flow – it changes the surface of the earth.

It cuts rocks, moves boulders, and deposits sediments.
It constantly attempts to carve away all the mountains in its path.

The goal of the river is to create a wide, flat valley which it can flow smoothly towards the ocean.

That is the relation between the mountains and plains.

Question 17.
Why is a flood plain more suited to human habitation compared to mountains? (Text Book Page No. 23)
Answer:
Disadvantages of mountains :

Question 18.
Recall the life of people living in the hills or flood plains that you may have read of. (Text Book Page No. 23)
Answer:
Bison hills are spread in both Bhadradri Kothagudem and W. Godavari districts along either banks of the river Godavari. Many tribal communities live in the hill tracts of this region with their own special life.

These tribals live in small habitations – about 5 to 10 hutments in one place. The habitations are far from each other.

Konda Reddys grow crops in a distinct way called Podu. When rains arrive in June they dibble seeds with the help of digging seeds.

Except for a few months during and after harvest, Konda Reddy women and children are engaged in collection of edible forest produce for subsistence.

There are no rivers or wells in this area. They fetch water from natural springs.

These hill tribes are very few in number but they follow a pattern of life which is very ancient.