→ The geometrical figures which have the same shape but are not necessarily of the same size are called similar figures.

→ The heights and distances of distant objects can be found using the principles of similar figures.

→ A polygon in which all sides and all its angles are equal is called a regular polygon. Eg.:

→ The ratio of the corresponding sides is referred to as scale factor or representative factor.

→ All squares are similar.

→ All circles are similar.

→ All equilateral triangles are similar.

→ Two congruent figures are similar but two similar figures need not be congruent.

→ A square ABCD and a rectangle PQRS are of equal corresponding angles, but their corre¬sponding sides are not in proportion.

∴ The square ABCD and the rectangle PQRS are not similar.

→ The corresponding sides of a square ABCD and a rhombus PQRS are equal but their corresponding angles are not equal. So they are not similar. 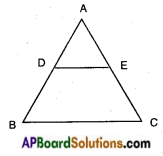 → If a line divides any two sides of a triangle in the same ratio, then the line must be parallel to the third side. 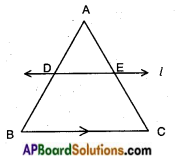 → If two angles of a triangle are equal to two corresponding angles of another triangle then the two triangles are similar.

→ The ratio of areas of two similar triangles is equal to the ratio corresponding sides.

→ Pythagoras theorem: In a right angled triangle, the square of hypotenuse is equal to the sum of the squares of other two sides.

→ In a triangle, if square of one side is equal to sum of squares of the other two sides, then the angle opposite to the first side is right angle.

→ Baudhayan Theorem (about 800 BC):
The diagonal of a rectangle produces itself the same area as produced by its both sides (i.e., length and breadth).
In rectangle ABCD,

→ A sentence which is either true or false but not both is called a simple statement.

→ A statement formed by combining two or more simple statements is called a compound statement.

→ A compound statement of the form “If …… then ……” is called a Conditional or Implication.

→ A statement obtained by modifying the given statement by ‘NOT’ is called its negation.