Review of Your Previous Knowledge

Question 1.
Have you ever touched a magnifying glass with your hand?
Answer:
Yes.

Question 2.
Have you touched the glass in the spectacles used for reading with your hand?
A. Yes.

Question 1.
A man wants to get a picture of a zebra. He photographed a white donkey after fitting a glass, with black stripes, on to the lens of his camera. What photo will he get? Explain. (AS1)
(OR)
A person wants to get a picture of zebra and he photographed a white donkey fitting a glass with black stripes. Does he get photo of zebra? Explain.
Answer:
The person was unable to gel the picture <>l zebra because only two rays are enough to form complete image after convergence. So he will get the image of white donkey but the intensity may be less.
(OR)
He will get a picture of while donkey because e\ery part of lens forms an image so if you cover lens with stripes still it forms a complete image. However, the intensity of the image will be reduced.

Question 2.
Two converging lenses are to be placed in the path of parallel rays so that the rays remain parallel after passing through both lenses. How should the lenses be arranged? Explain with a neat ray diagram. (AS1)
Answer:

Image will be formed at 30cm in between F1, and 2F1. Image is real, inverted and diminished.

∴ Focal length of lens = Radius of curvature of surface. 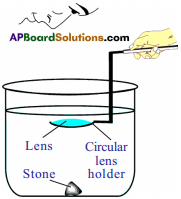 Note : For convenience, use 5 or 10 cm focal length convex lens.

Question 7.
How do you find the focal length of a lens experimentally? (AS1)
Answer:

Question 10.
A convex lens is made up of three different materials as shown in the figure Q-10. How many of images does it form? (AS2) 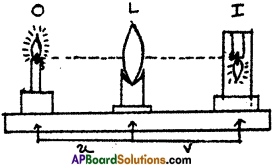 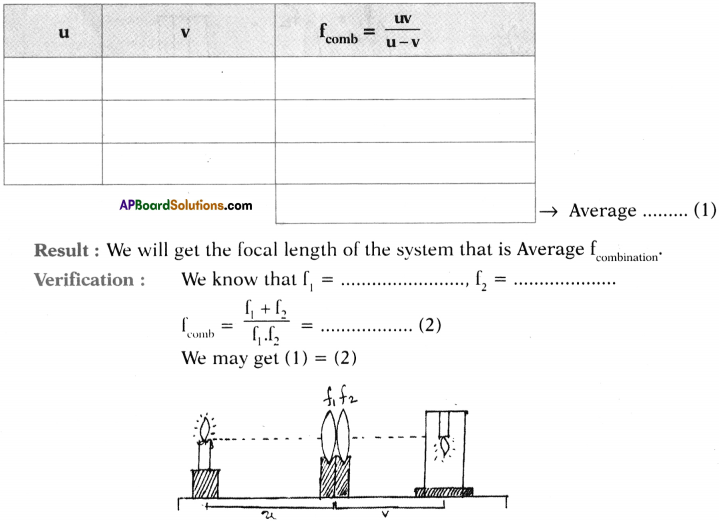 ii) They are separated by a distance of ‘d’ :
Procedure : 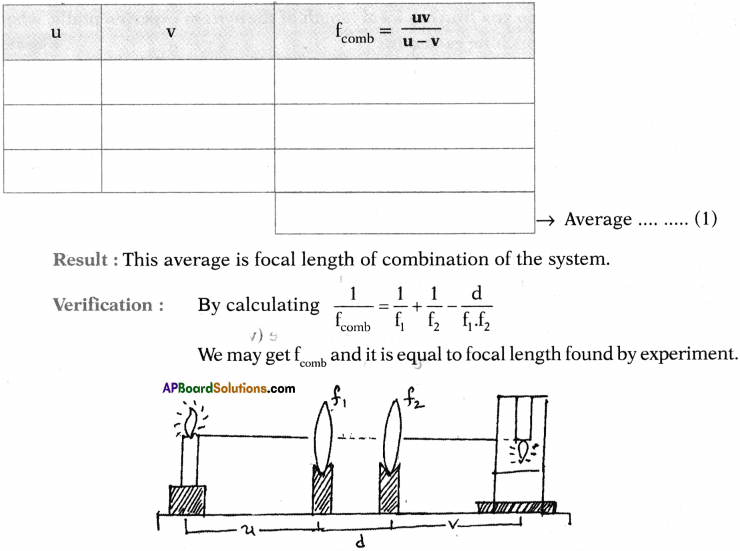 Question 14.
Collect the information about the lenses available in an optical shop. Find out how the focal length of a lens may be determined by the given power’ of the lens. (AS4)
Answer:
I had collected the information regarding different lenses available at optical shops.
The relationship between power and focal length is power (D) = \(\frac{1}{f}\). f is in meters. 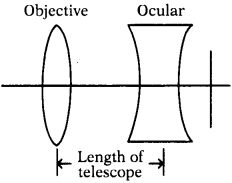 A Galilean telescope is defined as having one convex lens and one concave lens. The concave lens serves as the ocular lens or the eye piece, while the convex lens serves as the objective. The lens are situated on either side of a tube such that the focal point of the ocular lens is the same as the focal point for the objective lens. 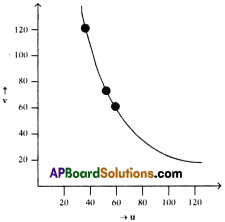 The shape of the graph is rectangular hyperbola.

For these values the graph is straight line which touches the axis as shown in figure. 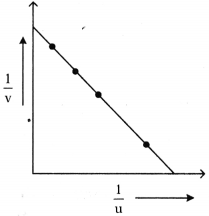 Question 17.
Figure shows ray AB that has passed through a divergent lens. Construct the path of the ray up to the lens if the F position of its foci is known. (AS5)

The path of the ray up to the lens if the position of foci is known for ray AB is diverging lens or concave lens path.

Question 18.
Figure shows a point light source and its image produced by a lens with an optical axis N1, N2. Find the position of the lens and its foci using a ray diagram. (AS5)

Question 19.
Find the focus by drawing a ray diagram using the position of source S and the image S’ given in the figure. (AS5) 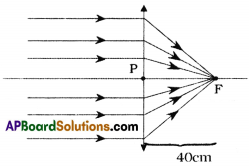 1. A parallel beam of rays when incident on a convergent lens, after refraction they meet at the focus of the lens.

2. A beam of rays which is incident on a divergent lens, after refraction, pass parallel to the principal axis. If we extend these incident rays, they seems to meet at focus of the lens.

Nature : Real, inverted and diminished.
Position : Image is formed on the principal axis between the points F1, and 2F1.

ii) Object is placed between F2 and optic centre P :

Nature : Virtual, erect and magnified.
Position : Same side of the lens where object is placed.

Question 22.
How do you appreciate the coincidence of the experimental facts with the results obtained by a ray diagram in terms of behaviour of images formed by lenses? (AS6)
Answer:

But, by simply draw a ray diagram on a paper, we can get exact image distance (v) very easily, without lab.

Question 23.
Find the refractive index of the glass which is a symmetrical convergent lens if its focal length is equal to the radius of curvature of its surface. (AS7)
Answer:
Given that lens is convergent symmetrical

Question 25.
The distance between two point sources of light is 24 cm. Where should a convergent lens with a focal length of f = 9 cm be placed between them to obtain the images of both sources at the same point? (AS7)
Answer:
For Source S1 : 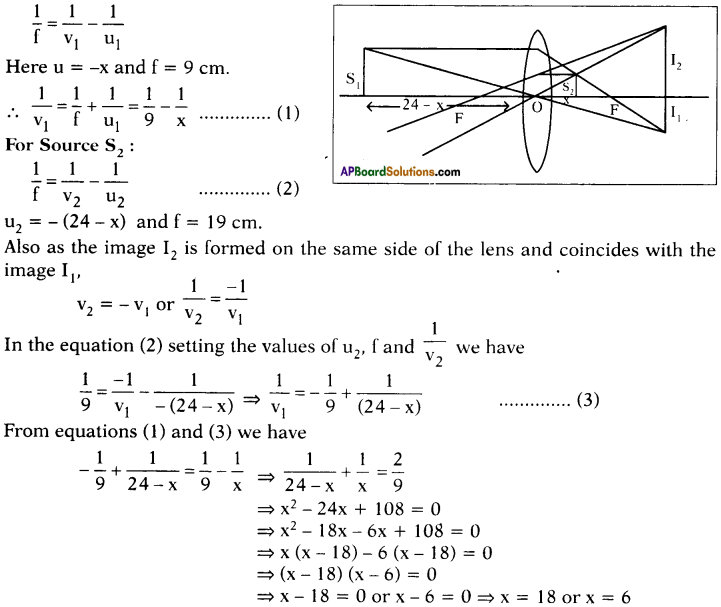 ∴ The convex lens may be placed between the two sources, such that a distance of 18 cm from one source, and 6 cm from other source.

Question 26.
Suppose you are inside the water in a swimming pool near an edge. A friend is standing on the edge. Do you find your friend taller or shorter than his usual height? Why? (AS7)
(OR)
If your friend is standing near an edge of the swimming pool and you are in the water, do you find he is taller or shorter than his usual height?
Answer: 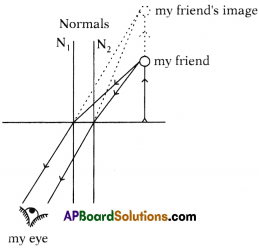 1. Which one of the following materials cannot be used to make a lens?
A) water
B) glass
C) plastic
D) clay
Answer:
D) clay

3. Focal length of the plano-convex lens is when its radius of curvature of the surface is R and n is the refractive index of the lens.

5. Which of the following is the lens maker’s formula? 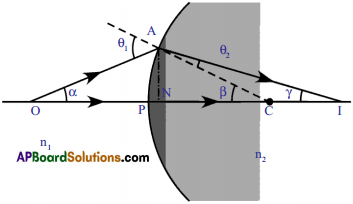 ∴ This is the required relation for curved surfaces. 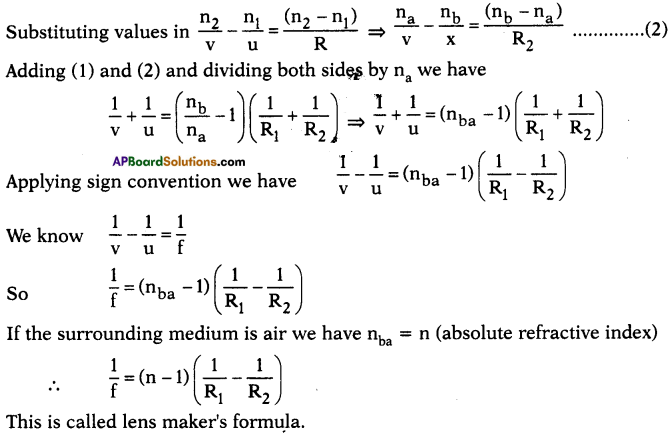 Question 3.
Derive the lens formula.
Answer:
1. Consider an object 00′ placed on the principal axis in front of a convex lens as shown in the figure. Let II’ be the real image formed by the lens, i.e. the other side of it.

2. From the figure : PO, PI, PFt are the object distance, image distance and focal length respectively. 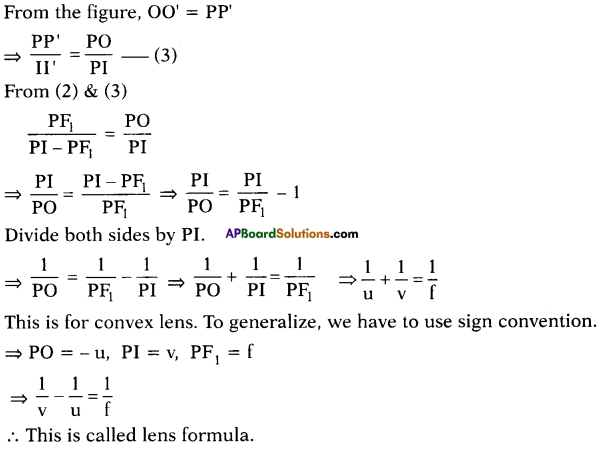 Question 1.
What happens to a ray that is incident on a curved interface separating the two media? Are the laws of refraction still valid?
Answer:
It undergoes deviation from its path. Yes, the laws of reflection are still valid. 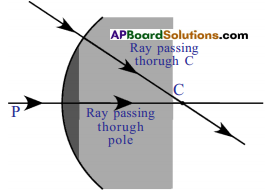 Answer:
According to Snell’s law the ray which travels along the normal drawn to the surface does not deviate from its path. Hence both rays in the given condition travel along normal, so they do not deviate.

Question 4.
What difference do you notice in the refracted rays in 4 (a) and 4 (b)? What could be the reason for that difference? 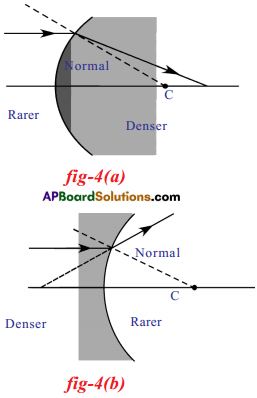 Question 6.
You might have observed that a lemon in the water of a glass tumbler appears bigger than its actual size, when viewed from the sides of tumbler.
1) How can you explain this (appeared) change in size of lemon?
Answer:
It can be explained by using refraction. When light travels from one medium to another medium it undergoes refraction.

3) Can you draw a ray diagram to explain this phenomenon?
Answer:

Question 7.
What happens to the light ray when a transparent material with two curved surfaces is placed in its path?
Answer:
The light ray undergoes refraction.

Question 9.
How does a light ray behave when it is passed through a lens?
Answer:
A light ray will deviate from its path in some cases and does not deviate in some other cases.

Question 12.
What happens when parallel rays of light fall on a lens making some angle with the principal axis?
Answer:’
The rays converge at a point (or) appear to diverge from a point lying on the focal plane.

Question 14.
Could you get an image on the screen for every object distance with a convex lens?
Answer:
No, when the object is placed between pole and focus we will get virtual, erect and enlarged image on the other side of the- object.

Question 15.
Why don’t you get an image for certain object distances?
Answer:
Because at those distances the light rays diverge each other.

Question 17.
When you do not get an image on the screen, try to see the image with your eye directly from the place of the screen. Could you see the image? What type of image do you see?
Answer:
Yes, we can see the image. This is a virtual image which we cannot capture on screen.

Question 1.
Write an activity to observe the light refraction at curved surface.
Answer:
Procedure and observation : Question 2.
Write an activity to know the characteristics of image due to convex lens at various distances.
Answer:
Aim:
Determination of focal length of bi-convex lens using UV method.

Material Required :
V Stand, convex lens, light source, screen, meter scale. Take a V-stand and place it on a long (nearly 2m) table at the middle. Place a convex lens on the v-stand. Imagine the principal axis of the lens. Light a candle and ask your friend to take the candle far away from the lens along the principal axis. Adjust a screen (a sheet of white paper placed perpendicular to the axis) which is on other side of the lens until you get an image on it.

Conclusion : From this we conclude that a convex lens forms both real and virtual images when object is placed at various positions.