Question 4.
How does the Constitution reflect the political events of the time? Draw from previous chapters on the freedom struggle.
Answer:

Question 5.
What differences would it have made to the making of our Constitution if the Assembly had been elected through universal adult franchise?
Answer:

Directive Principles:
These are guidelines to frame laws. These are not enforceable by the courts.

Cabinet Government (or) Parliamentary Type of Government:
A Council of Ministers with the Prime Minister as the head to aid and advise the President who shall, in the exercise of his functions, act in accordance with such advice.

Secularism:
Secularism is the basic structure of Indian Constitution. The government respects all religions. It does not uplift or degrade any particular religion.

Socialism:
The world Socialism was added to the preamble by the 42nd amendment- It implies social and economic equality.

Fedaralism:
The Constitution provides a federal structure. The powers are specifically divided between central and state government.

Independent judiciary:
India has an independent and integrated judiciary.

Question 7.
How has the Constitution defined and changed political institutions in the country?
Answer:

Conclusion: It defines India as a sovereign, democratic, socialist and secular republic. It has provisions for bringing about social change and defining the relationship between Individual citizen and the state.

Question 8.
While Constitution provides basic principles it is the engagement of people with the system that brings in social change. Do you agree with this statement, give reasons.
Answer:

Task 3: Read the following two preambles along with the Indian Preamble and see how they are similar or different. Remember each Constitution also reflects political events around the making of their nations. Try to relate to the political events that may have influenced the thought that went into the Constitution. (You can re-read the background of Japan in chapter 13 and look at page 234 to understand the background of Nepal.)
Answer:

Question 2.
Read the Preambles of Nepal and Japan given on Pages 232 and 233 in Textbook and answer the following questions.
a) What do you think is similar or different in the political context of these nations? What were the immediate prior events? Who were the previous rulers?
Answer:

b) Which Preamble refers to the word gender?
Answer:

c) Which Preamble reflects the desire for peace?
Answer:

d) How are people’s movements reflected in the Preamble?
Answer:
The Nepalese Constitution reflects the historic struggles and peoples’ movements launched by the people of Nepal at various times since 1951.

e) What is similar or different for Preambles in their reflection of the past?
Answer:

f) What types of promises are made up about the future society in the three countries?
Answer:

g) What promises are made about the nature of political system?
Answer:

h) What promises are made to the citizen of these nations?
Answer:

Question 4.
Do you think all the people of India can participate in the formulation of Constitution for the entire country? Was it important for all people to participate actively in this process or could it have been left to some wise people?
Answer:

Question 5.
If a Constitution for the entire school had to be drafted, who all should be involved in it and how?
Answer:

Question 6.
Fill in the blanks.
a) Drafting Committee was appointed roughly ———- days after the Independence.
b) The Assembly first appointed special committees on specific issues like, ———-, ———-, and ———-.
c) The reports of these committees were discussed by the ———- and key decisions were taken by it.
d) The ———- Committee headed by Dr. Ambedkar had to incorporate these decisions.
e) The Draft also drew upon provisions of the ———- passed by the British Government.
f) It was then made available to public for ———- months so that they could criticise and give their suggestions on it.
g) In the Draft Constitution there were ———- Articles and ———- Schedules.
Answer:
a) fifteen,
b) Fundamental rights, Minorities, Tribal Areas,
c) Constituent Assembly,
d) Drafting,
e) Government of India Act, 1935,
f) eight,
g) 395,8.

Question 7.
Fill in the blanks.
a) The powers given to Indian President are more similar to ———-.
b) Constituent Assembly visualised that the Indian President follows the advice of ———-, than ———- of ———-.
Answer:
a) King; England; President; the USA
b) Ministers

Question 8.
What do you think was the difference between the position of the British King and the President of India?
Answer:

Question 9.
Under federal polity there are more than one government and in the Indian context we have  them at ———- and ———- levels. You belong to ———- state while you belong to ———- nation.
Answer:
Central; State; Andhra Pradesh; Indian.

Question 10.
Which type of Constitution gives more powers to the governments at the Centre?
Answer:

Question 11.
Which type of Constitution gives definite powers to both Central and State governments?
Answer:

Question 12.
In what ways are Indian states not “administrative units or agencies of the Union Government”?
Answer:

Question 13.
Why do you think the framers of the Indian Constitution rejected the idea of dual citizenship (of India and of the state)?
Answer:

Question 14.
Can you point out the main differences between Indian federalism and American federalism?
Answer:

Question 15.
Does the Indian Constitution allow the states to have their own civil servants (officers)?
Answer:

Question 16.
Are all officials of a state from the state’s civil services?
Answer:

Question 18.
How were the ideas of Seth and Draft Committee similar or different?
Answer:

Question 19.
Find out what form of autonomy is now being made available to villages after the 73rd amendment of the Constitution.
Answer:

Question 20.
Observe the newspaper cutting and answer the following question. What Hems can you read on this page? 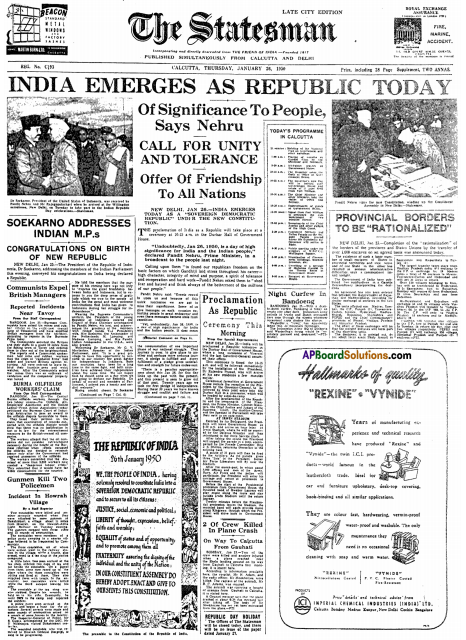 Question 21.
What are the differences of opinion that are being raised in the above debate (‘Debate on Fundamental Rights’ on Page 243 in Textbook)?
Answer:

Question 24.
Do you agree with the view that the Constitution should have put an end to all aspects of the caste system instead of just ending untouchability? How do you think it could have been done ?
Answer:

Question 25.
What are the examples and explanations you can identify with basic features of Indian Constitution?
Answer: