Students can go through AP Board 7th Class Social Notes 3rd Lesson Learning Through Maps to understand and remember the concept easily.

→ Maps make our travel easier and accurate in guiding us towards the destination.

→ Magellan was the first person who voyaged across the Globe.

→ The Sailors and travellers had a great contribution in map – making.

→ Scale, directions, symbols and colours are parts of a map.

→ Title of the map says about the theme or subject of the map.

→ Map makers use symbols to show their location in a map.

→ Maps are the key resources to know the details of a place.

→ The map that shows the information about the physical features of a place like mountain ranges, hills, plateaus, plains, rivers, deserts, lakes, highlands etc. is called a physical map.

→ The imaginary lines that connect the places of equal heights are known as Contour lines.

→ Maps that are prepared for a special purpose or on theme are called thematic maps.

→ The map that shows historical details are known as Historical maps.

→ Index of a Map : A list of some kind of feature shown on the map, which either helps users to interpret the map, or to locate.

→ Types of Maps : Maps are classified based on the scale theme/content/ concepts and methods of preparation.
Ex:

→ Physical Maps : The map that shows the information about the physical features of a place like mountain ranges, hills, plateaus, plains, rivers, deserts, lakes, high lands etc. is called a physical map.

→ Thematic Maps : Maps that are prepared fora special purpose or on theme are called thematic maps.

→ Historical Maps : The map that shows historical details are known as Historical maps.

1. Spatial Information : Information with direct or indirect reference to a specific location.

2. Cartographer : A person who draws maps.

3. Edicts : Inscriotions; The official order or proclamation issused by a person in authority.

4. Toposheets : Maps that represent the natural and cultural features of a particular area.

5. Union Territories : An administrative unit of our country, governed by the central goverment.

6. Conventional Symbol : These are the small pictures that stand for different features on a map used by Survey of India.

7. Voyage : A long journey involving travel by sea or in space.

8. Drainage : The flow of water, particularly the river systems. 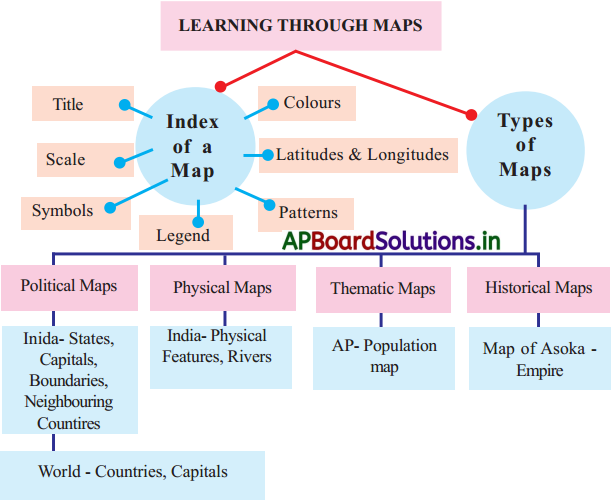