→ Resources that can be replaced after they are used are called renewable resources.

→ Resources that cannot be replaced at all after they are used are called non-renewable resources.

→ Percolation tanks are normally earthen dams with masonry structures where water may overflow.

→ Conservation is the practice of caring for the resources so all living things can benefit from them now and in the future.

→ Management of resources is essential for their conservation and restoration.

→ Resources are usually local specific and local people need to have control over them.

→ People need to be motivated to reduce pressure on the environment by reducing the utilization of resources and reusing some of them.

→ Less than 0.01% of the water on the earth is surface water, but if used judiciously, shall last for a long time.

→ Sustainable forestry practices are critical for ensuring resources well into the future.

→ Biodiversity is the variety of living things that populate the earth.

→ We need to protect biodiversity to ensure we have plentiful and varied food sources, medicines, etc.

→ Fossil fuels were produced from the remains of ancient plants and animals.

→ We must use our resources judiciously especially fossil fuels, coal, and petroleum as they will be ultimately exhausted.

→ Scientists are trying to produce renewable biofuels to power cars and trucks.

→ Seeds from the Jatropha curcas plants are used for the production of biofuel.

→ Earth’s supply of raw mineral resources is in danger.

→ Four R’s help to save the environment. They are Reduce, Reuse, Recycle and Recover.

→ Interstate and intercountry disputes should not hamper the availability of a resource.

→ International Union for the Conservation of Nature (IUCN) works to protect wildlife and habitats.

→ Percolation tank: These are the structures for recharging groundwater, normally earthen dams.

→ Borewells: A well constructed by boring a vertical hole.

→ Contour strip farming: Forming by planting several crops, such as corn, wheat, and clover, in alternating strips across a slope or across the path of the prevailing wind.

→ Dyke Management: Dykes or barriers, nearly 30 cm thick of brick – cement or stone cement barriers, extending down to the compact bedrock with mud or clay fillings were built in underground streams to tap groundwater optimally.

→ Open dug well: A well made by excavating with hand tools or power machinery Instead of by drilling or driving.

→ Conservation: The protection of natural things such as animals, plants, forests, etc., to prevent them from being spoiled or destroyed.

→ Biodiversity: The variety of living things that populate the earth. 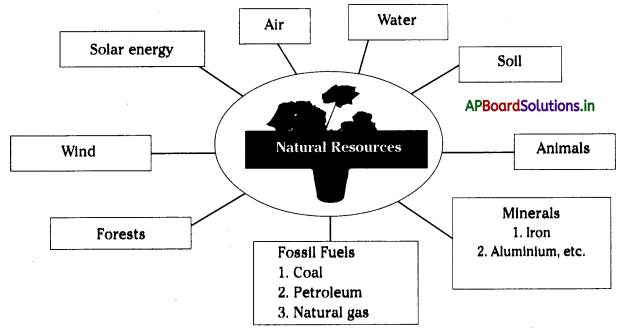