Students can go through AP State Board 10th Class Biology Notes Chapter 2 Respiration to understand and remember the concept easily.

→ The respiratory system is the integrated system of organs involved in the intake and exchange of oxygen and carbon dioxide between an organism and the environment.

→ Respiration is the process by which food is broken down for the release of energy.

→ From his early experiment, Lavoisier thought that the gas liberated on heating charcoal was like fixed air (CO,).

→ Lavoisier also felt that whatever it was in the atmosphere helped in the burning of phosphorous.

→ Lavoisier noted that the air we breathe out precipitated lime water while that after heating metal did not.

→ Lavoisier also found that something beyond the lungs occurred to produce carbon dioxide and body heat.

→ By respiratory system, we usually mean the passage that transport air into the lungs and to the microscopic air sacs called alveoli and vice versa.

→ The inhaled air passes through the nasal cavity its temperature is brought close to that of the body, and it takes up water vapour from it. Air is also filtered in the nasal cavity.

→ Epiglottis, a flap-like muscular valve controls movements of air and food towards their respective passages.

→ When air passes over the vocal cords in the larynx, it causes them to vibrate and produce sounds.

→ The trachea or windpipe channels air to the lungs and it divides into two bronchi – one leading to each lung.

→ Bronchioles finally terminate in clusters of air sacs called alveolus in the lungs which are very small and numerous.

→ The gaseous exchange takes place in alveoli as blood capillaries take up oxygen and expel CO2.

→ Breathing is the process of inhaling and exhaling.

→ When the volume of the chest cavity is increased, its internal pressure decreases and the air from the outside rushes into the lungs. This is known as inspiration.

→ During expiration, the chest wall is lowered and moves inward and the diaphragm relaxes and assumes its dome shape.

→ Oxygen is carried in the blood by binding haemoglobin which is present in the red blood cells.

→ Aerobic respiration occurs in the presence of oxygen-producing a lot of energy, CO2 and water.

→ Anaerobic respiration and fermentation occur in the absence of oxygen-producing less amount of energy.

→ The energy released due to the breakdown of sugar molecules is stored in ATP.

→ Each ATP molecule gives 7200 calories of energy. This energy is stored in the form of phosphate bonds.

→ In all organisms, glucose is oxidized in two stages. In the first stage called glycolysis, it is converted into two molecules of pyruvic acid.

→ In the second stage, if oxygen is available, pyruvic acid is oxidized to CO2 and water releases a lot of energy.

→ If oxygen is inadequate or not available, pyruvic acid is converted into either ethanol or lactic acid and has very little amount of energy.

→ Yeast grows rapidly if it is supplied v^th glucose in solution.

→ The combustion of glucose gives us carbon dioxide, water and energy.

→ The tracheal respiratory system is seen in insects like cockroaches, grasshoppers, etc.

→ In bronchial respiration, organisms respire with the help of gills or bronchus, e.g: Fish.

→ Respiration through the skin is known as cutaneous respiration, e.g: Frog, Earthworm and Leeches.

→ Respiration occurs in the cytoplasm and mitochondria where carbohydrates are burned to produce energy.

→ For a plant’s metabolism, both photosynthesis and respiration are required.

→ During the daytime, the rate of photosynthesis is usually higher than that of respiration while at night it is just reverse in most plants.

→ Aerobic respiration: Respiration that is carried out in the presence of oxygen.

→ Anaerobic respiration: Respiration is carried out in the absence of oxygen.

→ Alveoli: The structural and functional unit of lungs. Very small and numerous chambers are present in the lungs.

→ Pharynx: It is the common passage for food and air.

→ Trachea: It Is also known as the windpipe. It connects the nose and mouth to the lungs.

→ Bronchi: It is the part of the trachea that enter the lungs. These conduct air into the lungs.

→ Bronchioles: The bronchus branches into smaller tubes which in turn become bronchioles.

→ Epiglottis: A flap-like muscular valve that controls movements of air and food towards their respective passages.

→ Anabolic process: it ¡s the phase of metabolism In which simple substances are synthesized into complex materials of living tissue.

→ Catabolic process: Metabolic breakdown of complex molecules into simple ones.

→ Aerial roots: Plants that have their roots in very wet places such as ponds or marshes are unable to obtain oxygen. These plants form roots above the soil surface and take in oxygen through these roots. These roots are called aerial roots. Ex: mangrove.

→ Lenticels: The exchange of gases takes place from the stem through the openings called lenticels.

→ Fermentation: In the absence of oxygen, yeast cells convert glucose to ethanol (alcohol). This process is called Fermentation. For the production of alcohol, molasses, grape juice and germinating barley or wheat grains are used as raw materials.

→ Glycolysis: It is the first phase of respiration ¡n which glucose molecule is converted into two molecules of pyruvic acid.

→ Respiration: It is the process by which food is broken down to release energy in the cell.

→ Breath: The air is taken into or expelled from the lungs.

→ Combustion: A chemical process in which substances combine with the oxygen in the air to produce heat and light.

→ Vitiated air: Air from which oxygen has been removed. Air containing a reduced percentage of oxygen.

→ Diaphragm: The layer of the muscle between the lungs and the stomach, used especially to control breathing.

→ Inspiration or Inhalation: it is the stage of external respiration in which air or water is taken into the respiratory organ.

→ Expiration or Exhalation: It is the stage of external respiration in which air or water is sent out of the respiratory organ.

→ Pleura: These are the membranes covering the lungs.

→ Pant: To breath quickly with short noisy breaths because of running, climbing. etc.

→ Janus Green B solution: It is used to test the presence of oxygen in the medium.
(or)
Diazine solution It is blue ¡n colour and turns pink when oxygen is in short supply around it.

→ Dough: A mixture of flour and water ready to be baked into bread.

→ Fractional distillatIon: It is the separation of a mixture into its component parts, or fractions, such as in separating chemical compounds by their boiling point by heating them in to temperature at which one or more fractions of the compound will evaporate.

→ Tracheal respiration: It is the respiration that occurs through tube-like structures (trachea) present in insects.

→ Orchid: A plant that has flowers with three parts, the middle one being like a lip.

→ Gradient: The rate at which oxygen changes, or increases and decreases between one region and another region.

→ Marsh: An area of low flat land that is always wet and soft. 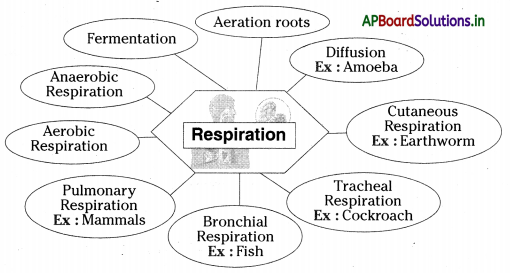