Students can go through AP State Board 10th Class Physical Science Notes Chapter 6 Structure of Atom to understand and remember the concept easily.

→ A spectrum is a group of wavelengths.

→ Electromagnetic energy (light) can have only certain discrete energy values which are given by the equation E = hv.

→ Atomic line spectra arise because of the absorption/emission of certain frequencies of light energy.

→ It is not possible to measure the position and velocity of an electron simultaneously.

→ The space around the nucleus where the probability of finding electrons is maximum is called orbital.

→ Spin is an intrinsic property of an electron.

→ The arrangement of electrons in shells, sub-shells and orbitals in an atom is called the electron configuration.

→ According to Pauli’s exclusion principle, no two electrons of the same atom can have the entire four quantum numbers same.

→ Hund’s rule: The orbitals of equal energy (degenerate) are occupied with one electron each before the pairing of electrons starts.

→ As long as an electron revolves in a stationary orbit it neither loses nor gains energy.

→ A rainbow is a natural spectrum appearing in the sky.

→ Light is considered an electromagnetic wave.

→ Electromagnetic waves are produced when an electric charge vibrates.

→ The relation between frequency and velocity of light is c = vλ.

→ An atom or molecule in an excited state can emit light to lower its energy in order to get stability.

→ The atomic spectrum of a hydrogen atom is a line spectrum.

→ The Quantum mechanical model of an atom was developed by Erwin Schrodinger.

→ As n increases, the orbitals become larger and the electrons in those orbitals are farther from the nucleus.

→ The number of electrons in a shell is 2n2.

→ Orbital quantum number (l) gives the shape of the orbital.

→ The splitting of spectral lines in a magnetic field is called the Zeeman effect.

→ The splitting of spectral lines in an electric field is called the Stark effect.

→ The orientation of the orbital with an external magnetic field determines the magnetic orbital quantum number.

→ Orbitals of the same energy are called Degenerate orbitals.

→ Spectrum: A spectrum is a group of wavelengths or frequencies.

→ Intensity: The amount of energy per unit volume is called intensity.

→ Orbital: The region of space around the nucleus where the probability of finding an electron is maximum is called an orbital.

→ Quantum numbers: The numbers indicate the probability of finding the electron in the space around the nucleus.

→ Shell (or) orbit: The path of an electron around the nucleus is called shell or orbit.

→ The shape of orbital electron spin: Electron has two types of spins. One is clockwise spin and the other is anti-clockwise spin,

→ Pauli’s exclusion principle: No two electrons of the same atom can have all four quantum numbers the same.

→ Aufbau principle: The electrons should be placed in the lowest available orbital until the total number of electrons added is equal to the atomic number.

→ Hund’s rule: This rule states that electron pairing in orbitals starts only when all available empty orbitals of the same energy are singly occupied.

→ Dispersion: The splitting of light into different colours (VIBGYOR) is called dispersion.

→ Heisenberg’s Principle of Uncertainty: It is not possible to find the exact position and velocity of an electron simultaneously and accurately.

→ Principal Quantum Number (n): The quantum number which explains the size and energy of orbitals is called principal quantum number.

→ Spin quantum number (s): It gives spin of the electrons about their own axis.

→ E = hv: Electromagnetic energy can have only certain discrete energy values which is given by the equation E = hv where h = Planck’s constant
v = frequency of radiation 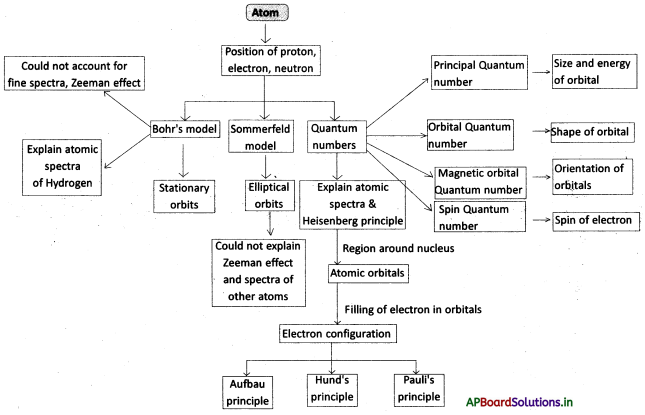