→ Human beings live along with a large community of plants and animals.

→ It snows heavily in the northern countries during winter.

→ In the region of the north pole, the sun is visible during the nighttime also.

→ The sun illuminates one-half of the earth at any given movement.

→ Rotation helps the entire earth to get heat and light on a daily basis.

→ The earth revolves around the sun while rotating around its own axis.

→ There are 3 temperature belts on the earth-Torrid, Temperate and Frigid Zones.

→ The duration of the day and night at the poles is six months each.

→ The sun does not rise high in the sky but only stays just above the sunrise point. It is also called the horizon.

→ The polar region is called the ‘Land of the midnight sun”.

→ The top of the axis keeps pointing to the pole star and this is called the polarity of the axis.

→ Seasons are quite opposite in the northern and southern hemispheres.

→ Seasons: Seasons occur on the earth due to the differences in temperatures.

→ The curvature of the Earth: Earth The earth’s surface being curved.

→ Snow Fall: In the extreme north and on high altitudes there is snowfall instead of rainfall.

→ ‘Horizon: In the north pole, the sun does not rise high in the sky but only stays just above the sunrise point. This is called the Horizon. 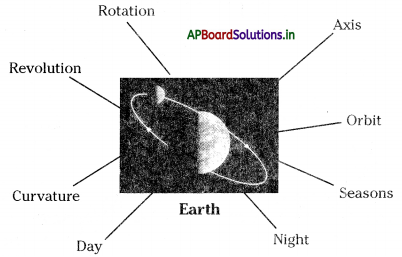