Students can go through AP State Board 10th Class Physical Science Notes Chapter 7 Classification of Elements- The Periodic Table to understand and remember the concept easily.

→The group of three elements in ascending order of their atomic weights in which the molecular weight of a middle element is the average of the first and third element is called a triad.

→ Elements are arranged in ascending order of their atomic weights, then every eighth element from starting element has similar properties. This is called an octave.

→ The horizontal rows and vertical columns of a periodic table are called periods and groups respectively.

→ The systematic arrangement of elements in a table in horizontal rows and vertical columns is called a periodic table.

→ Mendeleev’s periodic law: The physical and chemical properties of the elements are periodic functions of their atomic weights.

→ Moseley’s periodic law: The physical and chemical properties of elements are periodic functions of their atomic numbers.

→ The Group of elements is called the element family or chemical family.

→ Elements having atomic numbers 58 to 71 are called lanthanides.

→ Elements having atomic numbers 90 to 103 are called actinides.

→ Metalloids or semi-metals are elements that have properties that are intermediate between the properties of metals and non-metals.

→ Elements are classified on the basis of similarities in their properties.

→ Dobereiner grouped the elements into Triads and Newlands gave the law of octaves.

→ Modern periodic law: The physical and chemical properties of the elements are periodic functions of their electronic configurations.

→ Elements in the modern periodic table are arranged in 18 groups and 7 periods.

→ Elements are classified into s, p, d, f blocks depending upon which sub-shell the differentiating electron enters in the atom of the given element.

→ Half of the distance between nuclei of two atoms in solids is called atomic size.

→ The half of the distance between the two atoms in a covalent molecule is called the covalent radius.

→ The size of the positive ion is less than the neutral atom.

→ The size of the negative ion is greater than the neutral atom.

→ The energy required to remove the electron from unipositive ion is called 2nd ionization energy.

→ The electron affinity of an atom is defined as the energy liberated when an electron is added to its neutral gaseous atom.

→ The energy liberated when an electron is added to a uni-negative ion is called the 2nd electron affinity of that element.

→ The relative tendency of its atom to attract electrons towards itself when it is bounded to the atom of another element is called electronegativity of the element.

→ Triad: A group of three elements in which the atomic weight of a middle element is the average of first and third elements with similar properties.

→ Octave: When elements are arranged in the ascending order of their atomic weight, every element starting from a given element resembles in its properties to that of the starting element are called octaves.

→ Periodic Law: Law that regards the properties of elements in the periodic table.

→ Periods: The horizontal rows in the periodic table are called periods.

→ Groups: The vertical columns in the periodic table are called groups.

→ Lanthanides: Elements from 58Ce to 71Lu possess almost the same properties as 57La. So they are called lanthanides.

→ Actinides: Elements from 90Th to 103Lr are called actinides.

→ Element family: The elements that belong to the same group in the periodic table having similar properties are called element families.

→ Metalloids: The elements which have both metallic and non-metallic properties are called metalloids.

→ Periodicity: The properties of elements in a group of a periodic table have similar properties, that is called periodicity.

→ Ionization energy: The energy required to remove an electron from the outermost orbit or shell of a neutral gaseous atom is called ionization energy.

→ Electronegativity: The relative tendency of the element of an atom to attract electrons towards itself when it is bonded to another atom of another element.

→ Mendeleev’s periodic law: The properties of elements are the periodic functions of their atomic weights.

→ Modern periodic law: The properties of elements are the periodic functions of their atomic numbers.

→ Chalcogen family: The elements in group (16) form ores with elements.

→ Noble gases: The elements of the group (18) (VIII-A) which are least active.

→ Metallic radius: Half of the distance between adjacent nuclei of atoms in solid.

→ Covalent distance: Half of the distance between atoms in a covalent bond.

→ Valence (or) Valency: The combining power of elements with respect to hydrogen or oxygen.

→ Metals: The elements with three or fewer electrons in the outer shell are called metals.

→ Non-metals: The elements with five or more electrons in the outermost shell are called non-metals. 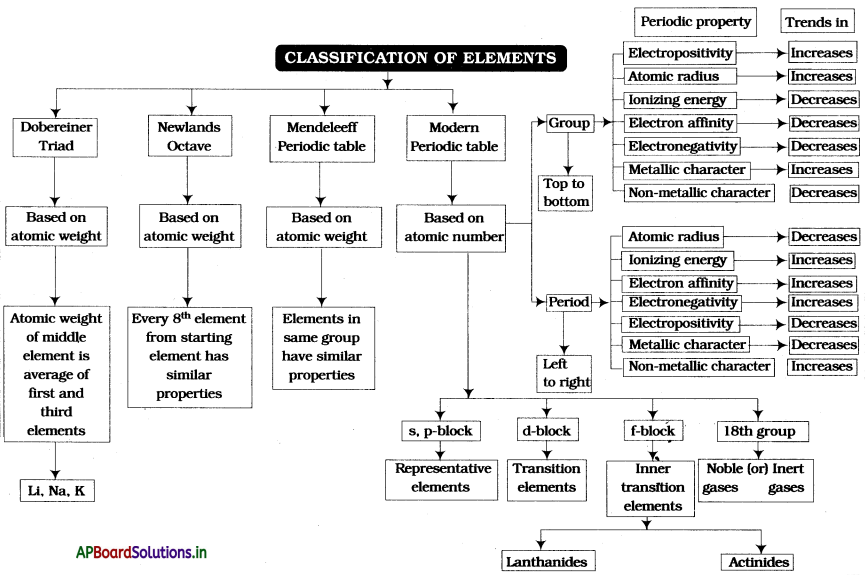