Students can go through AP State Board 8th Class Social Studies Notes Chapter 6 Minerals and Mining to understand and remember the concept easily.

→ Anything which we obtain naturally from under the earth is a mineral.

→ Minerals can be taken out for use by humans through a process of mining.

→ As a result, there has been a boom in mining.

→ There are extensive coal deposits in Khammam, Karimnagar, Adilabad, and Warangal. These mines are operated by Singareni Collieries Company Limited (SCCL).

→ Mangampeta in YSR Kadapa District has one of the largest – reserves of barytes mineral in the world.

→ In the open mines, almost all work is done by machines.

→ Minerals: Anything which we obtain naturally from under the earth is a mineral.

→ Non-renewable resources: The resources which are not possible to regenerate.

→ Coal: It is a fuel mineral. It is called Black gold.

→ Barytes: It is a mineral that is widely used in extracting natural gas and oil. 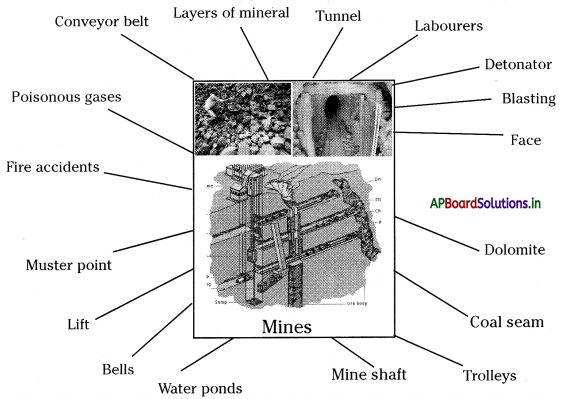