→ A negative charge flows through an electric wire when it is connected to an electric circuit.

→ Lightning is an electric discharge between two clouds or between clouds and the earth. This is an example of the motion of charge in the atmosphere.

→ In a circuit, the battery stores chemical energy, and this energy converts into electric energy.

→ The material which transfers energy from the battery (source) to the bulb (consumer) is called a conductor.

→ The SI unit of the electric current is ampere (A).

→ The electrons in the conductor move with a constant average speed called drift speed or drift velocity.

→ The direction of the electric current is the direct flow of positive charges.

→ An ammeter is used to measure electric current. It is always connected in series to the circuit. Work done by the electric force on the unit positive charge to move it through a distance is called the potential difference. It is denoted by V.

→ The amount of charge accumulated on the plates depends on the nature of the chemical used in the battery.

→ Electromotive force (emf) is defined as the work done by the chemical force to move unit positive charge from negative terminal to positive terminal of the battery.

→ A voltmeter is used to measure potential difference or emf across an electric device like a battery.

→ \(\frac{\mathrm{V}}{\mathrm{I}}\) is constant. This constant is called the resistance of the conductor.

→ According to Ohm’s law, the potential difference between the ends of a conductor is directly proportional to the electric current passing through it at a constant temperature.

→ Ohm’s law is not applicable to gaseous conductors and semi-conductors.

→ The resistance of a conductor is defined as the obstruction to the motion of the electrons in a conductor.

→ The material which offers resistance to the motion of electrons is called a resistor.

→ The electric shock is a combined effect of potential difference, electric current, and resistance of the human body.

→ Temperature, nature of the material, length of the conductor, and cross-section area are the factors that affect resistance.

→ The filament of an electric bulb is made of tungsten.

→ Semiconductors are used to make diodes, transistors, and integrated circuits.

→ A closed path created by the connecting wires through a battery along which the electrons conductor is called a circuit.

→ Two or more resistors are said to be connected in series if the same current flows through them.

→ Two or more resistors are said to be connected in parallel if the same potential difference exists across them.

→ According to Kirchhoff,
“The algebraic sum of the increases and decreases in potential difference across various components of a closed circuit loop must be zero.”

→ SI unit of power is the watt.

→ Electrical energy is the product of power and time.
E = power × time

→ Units of electrical energy are W and KWH (unit).

→ Charge: Positive or negative particles present in an electric circuit.

→ Potential difference: Work done by the electric force on the unit positive charge to move it through a distance.

→ Electric current: The ordered motion of electrons. (OR) The amount of charge crossing any cross-section of the conductor in one second.

→ Multi-meter: It is an electronic measuring instrument that combines several measurement functions in one unit.

→ Ohm’s law: V = IR; The potential difference between the ends of a conductor is directly proportional to the electric current passing through it at a constant temperature.

→ Resistance: The obstruction to the motion of the electrons in a conductor.

→ Kirchhoff’s laws: Two simple rules of Kirchhoff applicable to any DC circuit containing batteries and resistors connected in any way.

→ Electric power: The product of voltage and current.

→ Electric energy: The product of electric power and time.

→ Conductivity (σ): The reciprocal of resistivity.

→ Resistor: The material which offers resistance to the motion of electrons.

→ Overloading (or): When the current drawn from the mains is more than 20 A, Short circuit overheating occurs and may cause a fire. This is called overloading.

→ Fuse: The fuse consists of a thin wire of a low melting point.

→ Semi-conductors: The materials whose resistivity is 105 to 1010 times more than that of metals and 1015 to 1016 times less than that of insulators.
Eg: Silicon, Germanium.

→ Conductors: The materials which can conduct electricity. 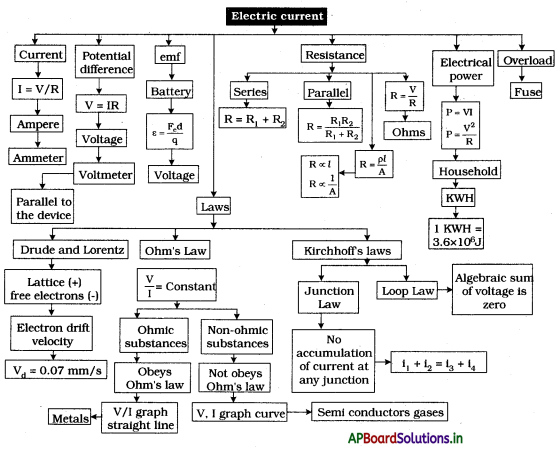