→ Increasing food production in proportion to the increasing population is a big challenge for our country.

→ The production of a crop depends on

→ Producing a variety of crops, as well as an increase in production, can be possible in a mixed crop system.

→ A plant uses only 0.1 per cent of the water it absorbs to form carbohydrates.

→ Transpiration and absorption of water occur through stomata.

→ Macronutrients are required in large quantities by plants. e.g.: Nitrogen, Phosphorous and Potassium.

→ Leguminous plants with root nodules supply nitrogen to the plant

→ Organic manure is produced by decaying plant and animal wastes.

→ Biofertilizers synthesise nutrients from the environment or from soil to plants.

→ Green leaf manure can be prepared by using any plant leaves.

→ Soil testing centres give us knowledge about the soil

→ Humus and water holding capacity are increased in the soil by applying natural manure.

→ Food Chain: Describes the linear sequence of organisms which represent their prey-predator relationship in the ecosystem.

→ Ecology: It ¡s the scientific study ¡n which plants, animals and people are related to each other and the environment.

→ Irrigation: To supply land or crops with water.

→ Mixed Crops: Cultivation of more than one crop in the same field.

→ Fertilizers: Substance that ¡s applied to increase soil fertility and plant growth. May be organic or inorganic.

→ Crop rotation: It is the process ¡n which one crop is followed by another crop on an agricultural field.
E.g.: After cultivation of Paddy, Black gram or Groundnut has to be grown followed by paddy again.

→ Replenish: To fill something again put new supplies into something. Soil testing centre: Tests the soil and give us knowledge about the soil.

→ Soil testing centre: Tests the soil and give us knowledge about the soil.

→ Biofertilizers: Fertilizers synthesized by microorganisms from the environment or from soil to plants.

→ Immunity: Resistance developed against chemicals or things or animals. Stomata: Microscopic holes present in the epidermis of the leaf, helps in transpiration.

→ Carbohydrate: It ¡s an organic compound that consists only of carbon, hydrogen and oxygen. A major food source.

→ Bacterial culture: the initial step in studying morphology and identification of bacteria ¡n the disease process.

→ Vermicompost: It is the product or process of composting using worms usually earthworms.

→ Watershed: A ridge of land that separates two adjacent river systems. A watershed is a basin-like landform defined by high points and ridgelines that descend into lower elevations and stream valleys.

→ Weeds: Other plants grow in afield along with the crop. These plants are called weeds.

→ Unirrigated farming: A farming that does not supply water to land or crops is called unirrigated forming. 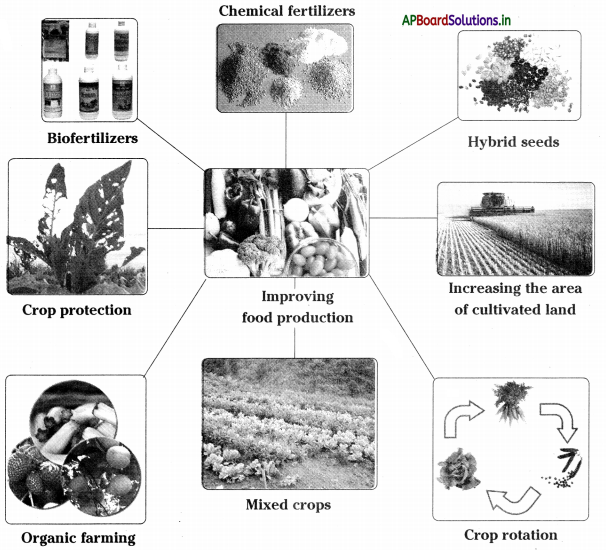