→ When the 1977 elections were announced, Indira released all political prisoners and removed censorship on freedom of movement, campaigns, and meetings.

→ The factional struggle in Janata Party soon culminated in the fall of the government within three years.

→ The Congress returned to power in 1980 and paid back Janata Party by dismissing nine non-Congress state governments.

→ There were different strands of the demands for autonomy in Andhra Pradesh, Assam, and Punjab.

→ The frequent change of Chief Ministers by the central Congress leadership made people believe they are not respected.

→ Popular film actor N.T. Ramarao set up Telugu Desam Party on the plank of the honor and self-respect of the Telugu-speaking people and swept the 1982 elections.

→ The Assamese-speaking people faced difficulties with the officialdom of Bengalis and the flooding of Bangladeshis.

→ In the 1970s, a social movement came out under the leadership of the All Assam Students Union (AASU).

→ There were talks between agitations and the central government for 3 years and reached an agreement.

→ When elections were conducted Assam Gana Parishad, an offshoot of AASU came to power.

→ In Punjab also there is agitation stating their state was ignored, more powers to states through a constitutional amendment, greater decentralization as their demands.

→ They occupied Golden Temple and the army vacated them.

→ A fallout of all this was the assassination of Indira.

→ Late Rajiv made an agreement with Langowali of Sikh SAD.

→ Rajiv liberalized system, hoped the participation of the masses, brought the telecom revolution.

→ Communalism sprang during this time through the demolition of Babri Masjid and try to build Ram Temple at Ayodhya.

→ This was the beginning of successful coalitions at the center.

→ Mandal Commission provided for Other Backward Class reservations and globalization are of this period.

→ Coalition: A government formed by two or more political parties governments working together.

→ Communalism: A strong sense of religious belonging that leads to extreme behavior or violence to others.

→ Majority: The amount by which the greater number of votes is cast, as In an election, exceéds the total number of remaining votes.

→ Minority: A group or party having fewer than a controlling number of votes.

→ Single party A democratic country where all the elections were won over democracy by a single political party decimating all others.

→ Outsiders : (In this context) The Assamese people called the Bengalis, migrators from Bangladesh, mostly Muslims.

→ Telecom revolution: (In India) Speeding up and’ spreading the network of telephonic communication In India using satellite technology.

→ Policy paralysis: In coalitions, the leading party could not Implement a policy for fear of withdrawal of support by partners.

→ Inclusive development: Making the scheduled cutes, scheduled tribes, and backward classes and minorities as a part of the process of development.

→ Mandal Commission: A committee chaired by B.P. Mandai recommended reservations for Other Backward Cluses In government employment and educational facilities.

→ Rath Yatra: In 1990, LK. Advani, the leader of BiP led ‘Rath Yatra’ from Somnath to Ayodhya, In support of Rani Temple at Ayodhya.

→ Majority government: The set up of government by a political party that got more than 5% of seats.

→ Minority government: Coalition government where the strength of the leading party is below 50% IndivIdually but the coalition has a majority. 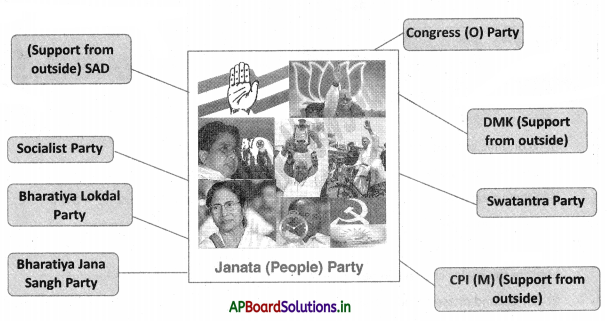