Students can go through AP State Board 10th Class Social Studies Notes Chapter 6 The People to understand and remember the concept easily.

→ The population is a pivotal element in social studies.

→ A census is a procedure of systematically acquiring and recording information about the members of a given population.

→ The census shows us the age structure, the sex ratio, the literacy rate, and life expectancy.

→ The numbers, distribution, and composition of the population are always changing. The birth rate is the number of live births per thousand persons in a year.

→ Population change can be expressed in two ways:

→ The total fertility rate is the number of children that are likely to be born to a woman if she were to live to the end of her childbearing years and bear children in accordance with the current pattern.

→ Migration is the movement of people across regions and territories.

→ India is one of the most densely populated countries in the world.

→ Population growth: Increase In the number of people who inhabit a territory or state.

→ Population density: It is a measurement of population per unit area or unit volume.

→ Sex ratio: It Is the ratio of males to females In a population.

→ Fertility rate: It is a term used to refer to the capability of people in a given region to give birth.

→ Population distribution: It is the pattern or arrangement of how people live in a particular area.

→ Infanticide: The crime of killing an infant.

→ literacy rate: It is the ability to read and write one’s own name and further for knowledge and interest.

→ Census: The procedure of systematically acquiring and recording information about the members of a given population. 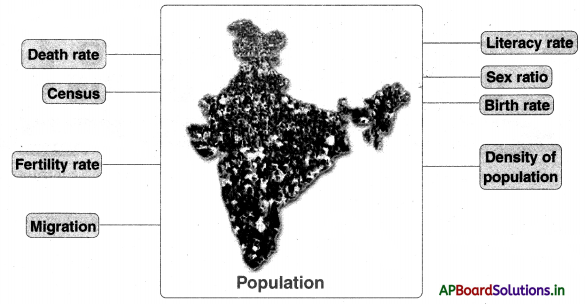