→ Some 600years ago the people of the world traveled very little. The Europeans wanted to discover sea routes to India, China, etc.

→ Latin Americas were brought under the control of Spain and Portugal So many resources were traded with.

→ Revolts broke out and the President of the USA formulated ‘the Munroe Doctrine.

→ England was successful in colonizing most of India by 1757 and by 1857 India came to be directly ruled by the queen of English.

→ Unlike India, China was not fully colonized Opium wars were fought and the opium trade was accepted in China. But it was forced to accept trade with all colonial powers with equal rights. China was cut into spheres of influence.

→ The Dutch were successful in colonizing Indonesia. They ruled till the end of World War II.

→ Congo came to be ruled by Belgium. South Africa was an

→ Ottoman Empire: The Turkist empire during the middle ages

→ Exploration: The act of traveling through a place in order to find out about it.

→ Munroe Doctrine: The Munroe doctrine is formulated by the President of the USA James Munroe according to which no European power would be allowed to build colonies in the American countries and the US would not interfere in the affairs of Europe or colonies in other continents.

→ Opium wars: Opium wars were the wars fought between China and England. 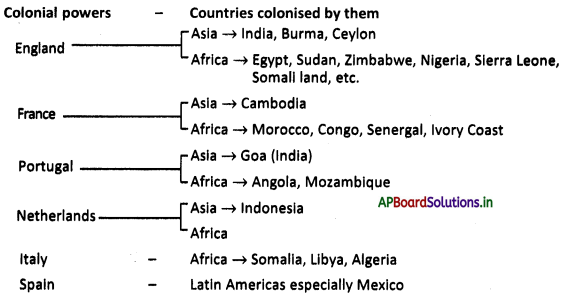