Students can go through AP State Board 6th Class Science Notes Chapter 3 Animals and their Food to understand and remember the concept easily.

→ Different types of animals that live in our surroundings have their own food habits. (Way of taking in food and type of food taken)

→ Sucking, licking, pecking, chewing, peeling, swallowing are all the ways by which animals take in their food.

→ Plants and animals are the main sources of food in our surroundings.

→ Each animal has its own style of getting food. They track down, collected, grab or hunt and then use various parts of their body to take food into the mouth finally.

→ To locate the food most animals use a wide range of senses – Smell, sight, hearing, taste, and touch.

→ Different parts may be used to take the same type of food.

→ Beaks of different birds are used to eat different types of food.

→ Leeches stick onto the skin and suck the blood of cattle as well as humans.

→ Frog gets its food by its sticky tongue.

→ Animals are divided into three types on the basis of their food. They are herbivores, carnivores and omnivores.

→ Dogs eat food by using their sharp teeth and tongue.

→ Wild animals like lions, tigers have strong legs to run, sharp claws to catch and sharp teeth to tear flesh.

→ The food chain is the connection between the animals on the basis of their food habits.

→ Any living thing that uses the energy of the sun to make its own food is a producer.

→ All animals are consumers because they do not make their own food.

→ The food chain describes how organisms get energy and nutrients by eating other organisms.

→ The food chain explains the interdependence of diverse organisms in nature.

→ The decomposers help in the cycling of materials between producers, consumers, and soil.

→ Several food chains in an ecosystem are interconnected to form a food web.

→ Food habit: The way a person or group eats.

→ Rumination: To bring back swallowed food into the mouth. Ex Cow, Buffalo, Camel.

→ Food chaIn: A food chain shows the feeding relationship between different organisms in a particular habitat.

→ Producers: Producers are organisms that make their own food. Ex Green plants.

→ Consumers: The organisms that eat other organisms for food are called “Consumers”. Ex Deer, Tiger, Lion.

→ Food Web: A food web is the natural interconnection of food chains and a graphical representation of what eats what is in a habitat.

→ Pet animals: An animal that you keep in your home to give you company or pleasure. Ex: Dog, cat, etc.

→ TrackIng: The act or the process of following something or source one.

→ Beak: The hard-pointed part of a bird’s mouth.

→ Reptiles: The vertebrates (having vertebral column) that crawl or move on their belly or on short legs. Ex: Snake, Lizard.

→ Natural scavenger: An organism or animal that feeds on waste, dead organic matter. They keep their surroundings clean in this manner. Ex: Crow, Vultures, Fungi, Microorganisms.

→ Wild animals: Wild animal Is an animal that is not tame: and lives on its own. Ex: Crow, Wolf, Squirrel.

→ RearIng: To take care and support up to maturity is called rearing.

→ Journal: The organisms that are active mainly in the daytime. Ex: Cow, Sheep, Goat, Hen, Man

→ Nocturnal: The organisms that are active mainly in the nighttime. Ex: Owl, Bat, Lizard.

→ PestIcides: A pesticide Is a chemical or other substance that is used to kill or prevent pests. Ex: Glycol

→ Colony: A group of organisms of the same type living or growing together.

→ Primary Consumers: A primary consumer is an organism that feeds on producers for energy. Ex: Deer, Cow, Goat.

→ Tertiary Consumers: A tertiary consumer is an organism that feeds on secondary consumers for energy. Ex: Tiger, Lion

→ Pond skater: A small insect that floats on the water surface.

→ Pest: An organism that may cause illness and damages the food crops.

→ Nectar: A sugar fluid secreted within the flowers.

→ RumInants: The animals that bring up food from their stomach and chew it again. Ex Cow, Camel.

→ Ecosystem: It is an area of living organisms along with the non-living components of their environment.

→ Aphids: The insect which feeds on plant juices.

→ Frugivorous Animals
These animals feed mostly on raw fruits, succulent fruits-like vegetables, roots, shoots, nuts, and seeds. Frugivore can be any type of herbivore or omnivore where the fruit is a preferred food type. Because approximately 20% of all mammalian herbivores eat fruit, frugivory is common among mammals

→ Ruminants
Animals like cows, buffalo, camels, etc., chew food very quickly, swallow and store it in a part of their stomach. After some time they take food material back from the stomach to the mouth and chew it again. This process is called rumination. These animals are called ruminants. 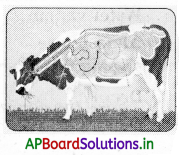