Question 3.
Where did the Indus civilization develop?
Answer:
Indus valley civilisation developed along the Indus river and the Ghaggar – Hakra river which is also identified as the dried Saraswati river.

Question 6.
What is civilization?
Answer:
Civilization is an advanced stage of human society, where people live with a reasonable degree of comfort and can think about things like art and education.

Question 8.
‘Describe the Great Bath’.
Answer:
‘Great Bath’ was found during excavations of Mohanjo – daro. The Great Bath was mainly used for religious practice. There were rooms on all sides. 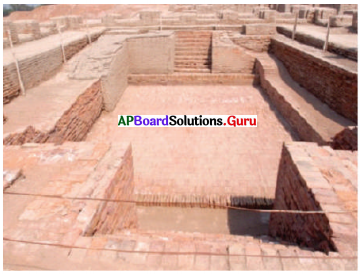 Question 9.
Describe the houses of the Harappan people.
Answer:
The Harappan people built their houses with dried or baked bricks. There were two-storied buildings also. Every house had a well for water and bathrooms with pipes that carried waste into the main drains.

Question 10.
Describe the entertainment and artwork of Harappan people.
Answer:
Dance chess, music, marbles, and dice were their entertainments. Bullfighting was their major entertainment. 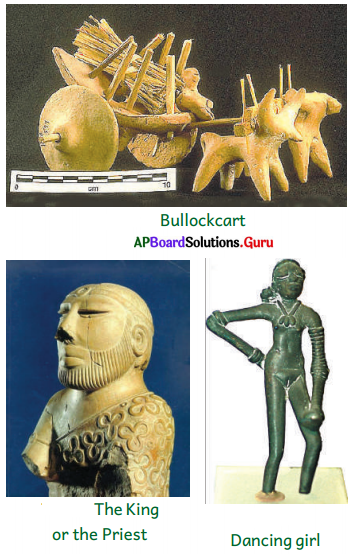 Art: Small idols of Ammatalli (Mother Goddess) made of clay have been found in large numbers in the excavations. The statue of a dancing girl and the stone idol of the bearded man is excellent artifacts. 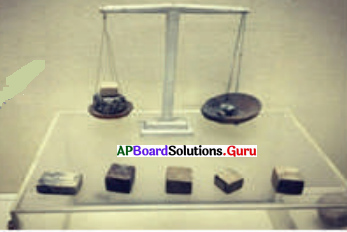 Question 12.
What is the origin of the Aryan Civilization?
Answer:
There are various theories about the origin of Aryans. Some historians are of the opinion that Aryans came from outside the country i.e Central Asia, Arctic region, East of Alphs, etc,.
Some historians say that Aryan is not a race. It is an Indo-European linguistic group. Some argue that they are the natives of India.

Question 14.
How can the Vedic civilization period be classified?
Answer:
The period of Vedic Civilization (1500-500 BCE) can be divided into two broad parts –

Question 15.
Explain the early Vedic period briefly.
Answer:
Social Life: Family is the basic unit of society. The father was the head of the family. The joint family system was in practice. The prisoners of war were called dasas and dasyas were like slaves. Monogamy was the usual practice.
Position of women: Women studied Vedas. There were no child marriages or Sati. Women can choose their husbands in swayamvaram. Widow remarriage was in practice. Dress: Men wore Vasa (dhoti), Adhivasa (upper cloth) as we wear today. Women used earrings, necklaces, bangles, and anklets as we do today.
Amusements: Chariot racing, hunting, boxing, dancing, and music are some of the amusements.
Education: Great importance was given to education. There were gurukuls. The entire institution was given freedom in their teaching and learning process. People can choose their profession.
Food and crops: Rice, barley, bean, and sesamum formed the food. They also ate bread, cake, milk, butter and curd, and fruits.
Religion: They believed that God is one and he can be worshipped and realized in many forms i.e Agni,
Varuna, Yama, Vayu, etc. 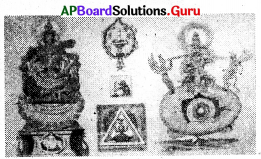 Question 16.
Explain later Vedic period briefly.
Answer:
Political changes: In the later Vedic Period the king became more powerful. Even Sabha and Samithi also lost their importance. The scope of the king was widened. The kingship became hereditary. The king performed rituals like Aswamedha and Rajasuya to expand the kingdom.
Social changes: Asrama system brahmacharya, grihastha, vanaprastha, and sannyasa were started during this period. The position of women was lowered. Varna system came into existence. Child marriage and sati started during this period.
Religious life: Religious ceremonies became complex and complicated. The Yagas and Yagnas were performed frequently. Brahma, Vishnu Ganesh, Skanda, and Siva were worshipped. Goddess Laxmi, Saraswathi, Parvathi got importance.
Epics: Ramayana and Mahabharatha are two great popular epics. Ramayana was written by Maharshi Valmiki in Sanskrit. Mahabharata was written in Sanskrit by Sage Vedavyasa.

Question 17.
In what ways do you think that the life of a ‘raja’ was different from that of a ‘dasa’ or ‘dasi’?
Answer:
In society, ‘raja’ was one of the highest civil positions. ’Rajas’ were the kings of the community, whereas the ‘dasas’/ ‘dasis’ were the lowest position in society. The ‘dasas’ / ‘dasis’ were slaves who were used for work. They were treated as the property of their owners. They were captured in war.

Question 18.
Write the differences between the religious life of the early Vedic period and the later Vedic period.
Answer: