Question 1.
Give few examples of motion you observe in day to day life.
Answer:

Question 2.
How do you explain the terms motion and rest? Give an illustrative answer.
Answer:

Question 4.
Explain the types of motion with suitable examples.
Answer:
Types of Motions: 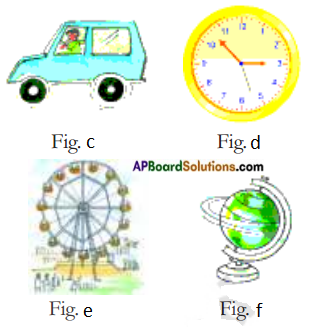 1. What similarity do we find in all the motions?
Answer:
We find all the bodies rotating around an axis.

Question 10.
Observe following pairs of objects that are in motion. Compare their motions and decide which moves slower and which move faster. Mark (S) in relevant box.
a) Whether the motion of a body is slow or fast?
Answer: 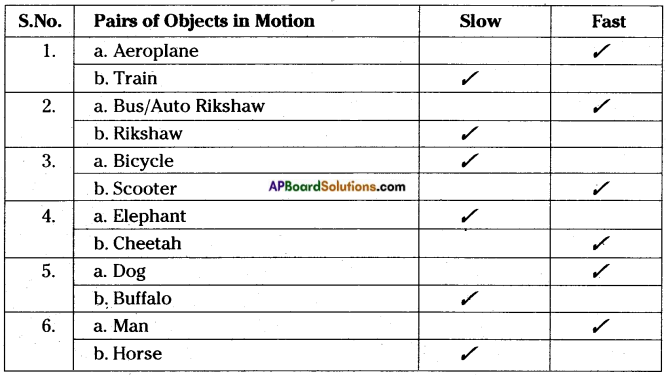 a) The body is said to be moving fast if it takes less time to travel the given distance as compared to another body.

Question 12.
Priya, Karthik, Divya and Kiran participated in a 100 m. running race. They took 20 s, 22s, 25s and 28s respectively to reach the finishing line. Who do you think ran the fastest and whose running is slowest? Why?
Answer:

Question 13.
Write the units of time.
Answer:
The basic unit of time is a second(s). Larger units of time are minutes (min) and hours (h).
Table: Units of time

Question 14.
What is the need to know the speed? How do we know it?
Answer:

Question 15.
How do you calculate the average speed of any object?
Answer:

Question 17.
Observe motion of the car.

Thus, the car travelled with an average speed of 90 km/h.
d) From the table, we notice that the car has covered unequal distances in equal intervals of time (10 min), which shows the speed of the car is not uniform.

Question 21.
How can you prove that motion is relative to the observer?
Answer:
Observing motion of the car.
Look at the pictures.

Question 22.
Observe the following pictures. Read the statement below the first picture and write similar statements about other pictures.
a) 1) The man in the boat is moving in respect to the bank of river. 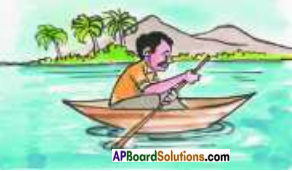 2) He is at rest with respect to the boat.

b) 1) The girl on the swing is with respect to the to seat of the swing. 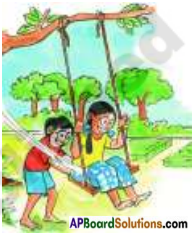 c) 1) The girl on the bicycle is in respect to the road. 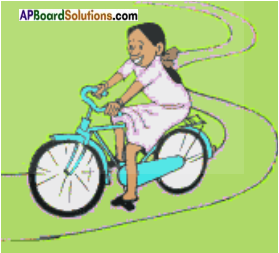 Question 23.
How are the hands of wall clock and the movement of a butterfly in a garden described?
Answer:

Question 24.
a) What difference do you find in the movement of hands of clock and the body of butterfly?
b) In which case is the change of position with time constant?
Answer:
a)

b) 1) But in the case of the butterfly, the change in its position is not constant while it is flying from one flower to another in the garden.

Question 27.
Observe the following motions of objects, State whether they are in rotatory motion? Draw a line showing axis of rotation by using pencil.
Answer:

Question 28.
Take a table tennis ball, and keep it on the surface of a table. Push the ball with your finger and observe its motion. Is it in Rotatory motion or in Translatory motion?
Answer:

Question 30.
Take a cell phone. Go to ‘setting’ and open ‘stop clock’ option. If you are not able to do this take help from your friend or teacher. Measure the time taken for the events mentioned in the table.

Which event has taken more time to complete? Think! How much time does it take to sing the national anthem?
Answer:
The student is advised to do this activity in the school and fill up the columns.

Question 31.
Write the motion of different parts of a bicycle while it is in motion.
Answer:
a) The wheel: Rotatory and Translatory motion.
b) The cycle chain: Rotatory motion.
c) The pedal with its arm: Rotatory.
d) The movement of feet pedaling Rotatory.
e) The rider along with the bicycle; Translatory.

Question 33.
Look at the following pictures.

The bus moved from point ‘A’ to ‘B’ in a certain interval of time.
Think and answer the following questions:
1. Do all the parts of bus (like wheels, head lights, windows etc., move along from point A’ to B’?
2. Is the direction of motion of bus along straight line or curved line?
Answer:

Question 34.
Observe the following table, and state the paths of motion for each case by putting (✓) mark in the relevant column.

Question 35.
Identify oscillatory motion among the following and put (✓) mark in the brackets given.
Answer:
A spinning top (- )
Bullet from a gun (-)
Typewriter key (✓)
Motion of a potter’s wheel. (-)
Motion of a vibrating sitar string. (✓)
Motion of a car taking a turn while moving. (-)
Ringing of a bell (✓)
A bouncing belli (✓)

Question 37.
How do you communicate the meaning of the terms ‘faster’ and ‘slower’ with the help of situation showing drawings?
Answer:
We understand that the distance travelled by an object in a given interval of time can help us to decide which one is faster and which one is slower. 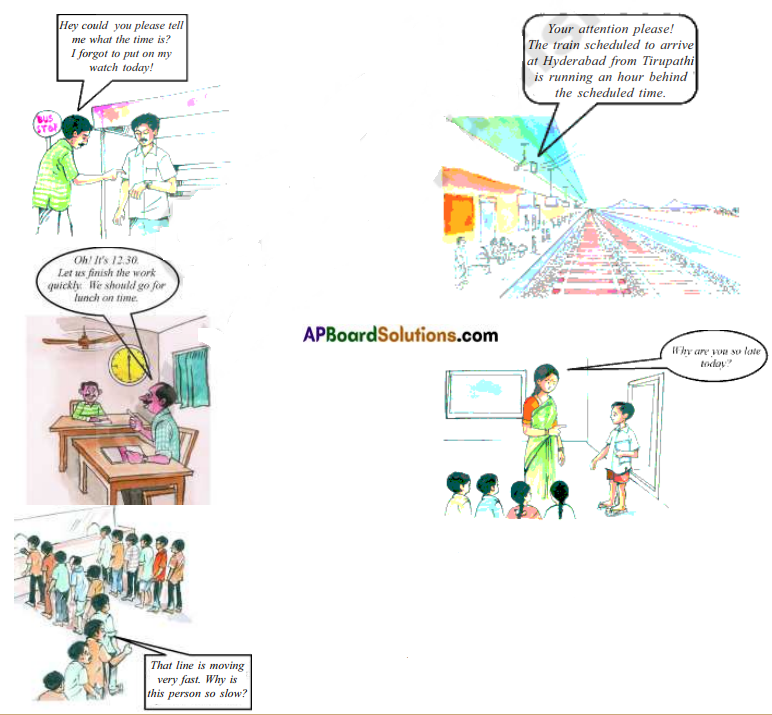 Question 38.
How do we measure or estimate time? Explain with an example.
Answer:

Question 40.
How is the measurement of time done?
Answer:

Question 43.
i) How many types of motions are there and what are they?
ii) Read the table and identify the motion.
If the motion is Rotatory, put (R), Translatory (T), both Rotation and Translatory (RT), Oscillatory (O).

Answer:
a) There are 3 types of motions.
They are: 1) Translatory motion; 2) Rotatory motion and 3) Oscillatory motion.

Question 43.
Why do you think the objects like trees, buildings, electric poles, etc. appear to be moving when you are sitting inside a moving bus or train?
Answer: