Students can go through AP State Board 7th Class Science Notes Chapter 12 Reproduction in Plants to understand and remember the concept easily.

→ Thalamus is the seat on which the parts of the flower are present.

→ Above the thalamus, there is a green tube-like structure called the calyx.

→ Androecium and Gynoecium are the male and female parts of flowers.

→ A sunflower is actually a bunch of flowers.

→ The small flowers in the bunch are called ‘florets’.

→ A flower that has four or more whorls is called a complete flower.

→ A flower in which any of these four whorls is missing is an incomplete flower.

→ A flower that has either stamens or pistils is called a unisexual flower.

→ A flower that has both stamens and pistil is a bisexual flower.

→ The process of pollen grains reaching the stigma from another is known as pollination.

→ Based on the presence and absence of floral parts flowers are two types. Complete flower and Incomplete flower.

→ Transfer of pollen grains from another to stigma is known as pollination. Flowers can be self-pollinated or cross-pollinated.

→ The fusion of male and female parts to form a zygote is called Fertilization.

→ The production of offspring from the zygote is called sexual reproduction.

→ Thalamus: Swollen head on the stalk of a flower.

→ Corolla: Attractive organ in a flower.

→ Calyx: Protective organ in a flower.

→ Stamen: The male organ of flowers that furnishes the pollen or fecundating dust.

→ Pistil: The seed-bearing organ of a flower.

→ Budding: The production of buds on plants (Undeveloped flower).

→ Zygote: The diploid cell resulting from the union of a haploid spermatozoon and ovum.

→ Vegetative Propagation: Production of a new plant from vegetative parts of a plant.

→ Pollination: Transfer of pollen grains from another to stigma. 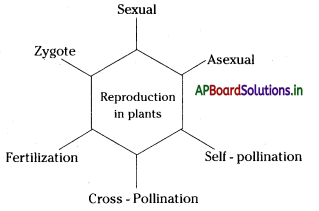 → Birds and insects are the natural agents of pollination. Nowadays farmers use pesticides to control pests on crops. The enormous use of pesticides kills insects also. It affects pollination. Crop yield becomes reduced particularly in sunflower crops. The rate of pollination is reduced because of the lack of insects in the fields. Think! How we destroy our beautiful nature.

→ Alexander Fleming a Scottish scientist, discovered that a certain kind of mold (Penicillium) produces a substance, named after the mold, called Penicillin, which can destroy many kinds of disease-causing bacteria. Penicillin came to be known as an antibiotic and saved the lives of many soldiers in World War II.

→ Johannes Kepler:
Johannes Kepler was a student and associate of Tycho, but he was a contrast to the latter. While Tyclio was rich, robust, noble, passionate, and an inquisitive mechanical and experimental genius, Kepler was in penury, sickly, and a poor experimenter.

Tycho was an average in Mathematics, his disciple was an expert in the subject Kepler was a man of indomitable perseverance and overcame all his deficiencies and misfortunes to attain a high rank among the scientific men.