Students can go through AP State Board 8th Class Biology Notes Chapter 8 Production and Management of Food From Plants to understand and remember the concept easily.

→ The plants which are grown in large numbers to get useful products are known as Crops.

→ The process of yielding crops is called Agriculture.

→ For some crops like Jowar, red gram takes a minimum of 180 days or more for harvesting. Such crops are called Long term crops.

→ The crops grown in the rainy season are termed Kharif.

→ The crops that are grown only in winter are called Rabi.

→ Rice is the prime, most essential, and important staple food crop and also called global grain.

→ The paddy growing field is divided into so many plots (Kayyalu or Madulu).

→ In general, farmers start agricultural work before the monsoon reaches (May, June months).

→ Before growing crops plowing the soil properly is necessary. The wooden plow is used for plowing.

→ The selection of seeds is an important step in Agriculture.

→ Nowadays farmers use the sophisticated seed drill used with the help of tractors.

→ Paddy planter is useful for farmers who cultivate paddy in large areas.

→ Wheat, Paddy, and sugarcane are generally affected by fungal diseases.

→ A farmer used a pesticide Dithane M-45 and Eldrige.

→ Generally, farmers should use fertilizers keeping in view with the nature of the soil and the crops he wants to grow.

→ Crop: The plants which are grown in large numbers to get useful products are known as crops.

→ Rabi season: The crops that are grown only in the winter season.

→ Plowing: Before growing crops plowing the soil is necessary which makes the soil loose.

→ Plots: Small piece of land. The form land ¡s made blocks or plots which is easier to leveling the form land and water for the crop.

→ Leveling: After plowing the fields have a lot of ups and downs. So leveler is are used to level the soil.

→ Seed crisis: Sometimes the rate of germination of the seeds Is not up to the mark. Sometimes never germinate. At sometimes they grow Into plants, but they are sterile.

→ Sprouting: When seeds are soaking in the water they germinate and produce the shoot.

→ Seed dispersal: The method of spreading seeds away from the parent plant for better germination.

→ Broadcasting: The method of dispersing the seeds by sprinkling.

→ Seed drill: It is an instrument used to sow seeds in the soil.

→ Nursery plot: Farmers develop seeds beds to grow paddy plantlets (Naru) in a plot, which needs to have their roots constantly submerged in water. They are to be uprooted and transplanted throughout the field (neatly).

→ Manure: The nutrients that enrich the fertility of the soil for the proper growth of plants.

→ PesticIdes: To control or kill the pests like grasshoppers and aphids, which damage crops and grains farmers use pesticides.

→ Paddy planter: It is easy to maintain proper distance sowing the seedlings. It is time-saving, ¡t is useful for farmers who cultivate paddy.

→ Biofertilizers: This is formed by decomposing plant and animal wastes. This is also called Natural Manure.

→ Chemical fertilizers: The manure which are prepared ¡n factories by using chemicals and is also called artificial manure.

→ Irrigation: The process of watering crop plants ¡n the field is known as irrigation.

→ Furrow irrigation: In this method of irrigation, the water is allowed to enter the field through channels, or furrows are made between two rows of crops.

→ Basin irrigation: The field is just filled with water as in the case of paddy.

→ Drip irrigation: When the availability of water is poor the water is made to reach the plants drop by drop.

→ Weeding: Removal of undesirable plants (weeds) which grow along with crop plants.

→ Weedicides: When crops are fully grown and may not be suitable for uprooting weeds, farmers use weedicides like 2-4 D’chloro phenoxy acetic acid to control or kill the weeds.

→ Harvesting: Collecting grains from the crop by cutting the matured plant is called harvesting.

→ Threshing: The dry plant’s stocks are beaten on a hard surface to remove the grain.

→ Winnowing: In winnowing the grains are poured out of a basket or tray held high up the wind blows the chaff, dust, and lighter seeds aside, while the heavy grains collect below.

→ Cold storage units: Here the vegetables, fruits, tamarind, chilies, and other products that are usually damaged and decolored within a short time.

→ Godowns: The place where the storage of dry grains to protect them from pests and microorganisms. 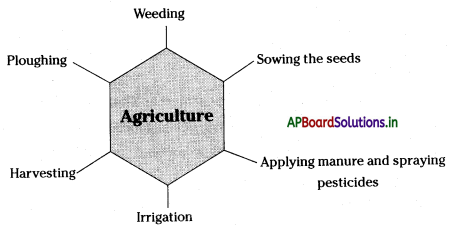 A bird that eats these fish might get a concentrated lethal dose. DDT also accumulates in the eggshells weakening them and making the shells break before hatching. There are just two out of the numerous ways that pesticides are eaten, passed down the food chain, and accumulate in the bodies of higher animals including human beings causing sickness and sometimes death. Think, how dangerous the pesticides are…!

→ Paddy requires a high quantity of water. That is why paddy is grown in areas where plenty of water is available. Because of marketing and supporting prices, paddy is grown all over the country irrespective of water availability. For this farmers dig bore wells and use groundwater wherever water is not sufficient. There is a need to shift to those crops which require less water. In some areas, recently farmers grow fish in paddy growing fields.

→ To meet the food requirement of the growing population there should be an increase in the cultivated land. But nowadays parts of the agricultural land in rural areas remain uncultivated land because of the non-availability of seeds, power, water supply, market problems. Farmers thinking that agriculture is a non-profitable task. 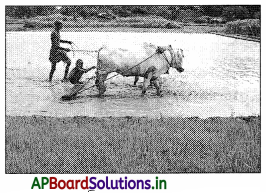 Actually, agriculture is the flesh and blood of our country. So the young generation should develop more passion towards agriculture which would be the only beneficial profession in near future.

→ Antonie Philips Van Leeuwenhoek
Antonie Philips van Leeuwenhoek was born (October24,1637-August 26, 1723) was a Dutch tradesman and scientist from Delft, Netherlands. He was commonly known as “the father of microbiology” and considered to be the first microbiologist. He is best known for his work on the improvement of microscopes, he was the first to observe and describe single-celled organisms, which he originally referred to as animalcules and which are now referred to as microorganisms. He was also the first to record microscopic observations of muscle fibers, bacteria, spermatozoa, and blood flow in capillaries. Leeuwenhoek made more than 500 optical lenses. He also created at least 25 microscopes, of different types, of which only nine survive. His microscopes were made of silver or copper fir cones, holding hand-made lenses. Those who have survived are capable of magnification up to 275 times. His scientific research was of remarkably high quality.