Students can go through AP State Board 7th Class Social Studies Notes Chapter 13 The Kings of Vijayanagara to understand and remember the concept easily.

→ Vijayanagara kingdom was founded by Harihara Raya and Bukka Raya in 1336 AD with the blessings of the sage – Vidyaranya.

→ It was ruled by four dynasties – Sangama, Saluva, Tuluva and Aravali.

→ On the north of Tungabhadra, the Bahmani kingdom was established with its capital in Gulbarga.

→ Of these five kingdoms, Bijapur and Golkonda achieved prominence.

→ We know much about the Vijayanagara kingdom from inscriptions, books, buildings and detailed accounts of foreign travellers.

→ The capital city of Vijayanagara was built on the bank of the river Tungabhadra with seven rings of fortifications.

→ The city had four separate divisions – the first one devoted to temples, the second one for crops, the third one for the royal centre and the fourth one for ordinary town’s folk.

→ By importing a large number of horses from Arabia, by recruiting a large army, by building many strong forts and by introducing guns and cannons in their forces, the Vijayanagara rulers attained great military power.

→ The Nayakas held Amara – revenue assignments whose revenue they could collect and use for maintaining the troops kept in their possession. They also had judicial powers.

→ Many powerful Nayak controlled vast areas and at times they could even challenge the Vijayanagara Kings. By building tanks and irrigation canals, the Nayakas helped to bring the large areas of the kingdom under cultivation.

→ Because of their efforts, there was a tremendous increase in agricultural production. This in turn provided the impetus to trade.

→ Trade-in agricultural produce, as well as craft, produce like cloth increased manifold in the Vijayanagara period.

→ Trade centres were established on both of India’s extensive coasts.

→ The strategic goods the Vijayanagara kingdom imported were horses, guns and cannons.

→ Indian exports remained the same as in earlier periods as textiles and other craft items.

→ He was a great general. He defeated the Sultans of Bahmani and the Gajapathis of Odisha.

→ Krishnadeva Raya was also a patron of Telugu literature. He himself wrote the book – Amuktamalyada.

→ His court was adorned with eight poets known popularly as Ashtadiggajas.

→ In 1565 AD all five Bahmani kingdoms joined together and Aliya Rama Raya of Vijayanagara kingdom in Rakkasi Tangadi (Tallikota) war.

→ They looted and destroyed the Vijayanagara city.

→ Their capital was’ shifted to Chandragiri.

→ The succeeding emperors could not regain the glory of Vijayanagara.

→ Amaranayaka: The captains who held Amara revenue assignments i.e., they were given some villages and cities whose revenue they could collect and use.

→ Archaeologists: A person who studies human history and prehistory through the excavation of sites and the analysis of artefacts and other physical remains.
(OR)
Scientists who excavate and study the historical remains.

→ Bahmani Kingdoms: A Muslim state of the Deccan in South India and one of the major medieval Indian kingdoms. Bah manid Sultanate was the first independent Islamic kingdom in South India.

→ Portuguese: A native or inhabitant of Portugal or a person of Portuguese descent.
(OR)
An ethnic group indigenous to the country of Portugal. Their language is Portugal. 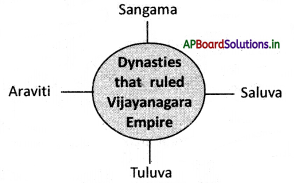 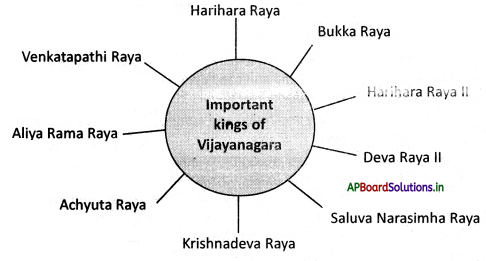 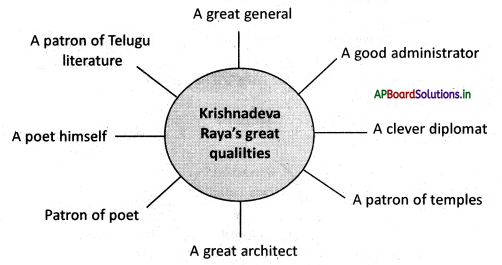