Students can go through AP State Board 7th Class Social Studies Notes Chapter 16 Making of Laws in the State Assembly to understand and remember the concept easily.

→ The legislative assembly is the most important body for making the laws for the state.

→ Our state assembly has 175 members.

→ These members of the Legislative Assembly (MLAs) are elected directly by the people.

→ Each of these 175 members is elected from a constituency. Thus there are 175 constituencies in the state.

→ All men and women of 18 years of age or above have the right to vote.

→ Usually, elections to these state legislative assemblies are held once every five years.

→ All political parties come out with election manifestos.

→ Election manifestos are descriptions of programs that parties intend to undertake and promises that are relevant to the local context.

→ Voters have to show their identity cards issued by the election commission.

→ Candidates can cast their vote freely without fear, without getting influenced by the offerings of money or goods offered by the candidates.

→ The candidate who secures the highest number of votes is declared elected.

→ The party which has more than half a number of seats is considered to have got a majority.

→ The members of the majority party will elect one member among themselves as their leader. He will be made the chief minister of the state by Governor.

→ The chief minister will form his cabinet, which is called the government. The cabinet is responsible for implementing laws and developmental plans.

→ In case no single party gets more than half of the seats two or more political parties come together to form a government called the coalition government.

→ If anything goes wrong with a minister, the entire cabinet is responsible for it.

→ The speaker, elected by the MLAs, conducts the assembly meetings.

→ The entire cabinet along with the Chief Minister is responsible to the assembly.

→ The proposed law is called a ‘Bill’. After being passed by both the chambers and approval by the Governor, it becomes a law and is called an ‘Act’ of the legislature.

→ The minister, who introduced the bill, will describe it, in detail in the assembly.

→ A small committee is set up to these suggestions.

→ After the Vidhan Sabha and Vidhan Parishad approve the bell, it will be sent to the Governor for approval. Then it will be called an Act and it published in Gazette.

→ Manifesto: Public declaration of a policy by a party before the election, mostly filled with promises.

→ Cabinet: Council of Ministers along with Chief Minister who held responsible for the Legislative Assembly.

→ Speaker: The Chairman of the Lower House and who leads the proceedings of the House

→ Assembly: A group of people who are elected to make decisions or laws for a particular country, area, or organization.
(OR)
The most important body for making the laws for the state.

→ Opposition party: The party which ¡s not ¡n power. 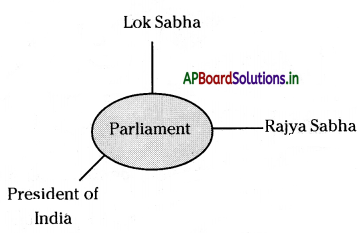 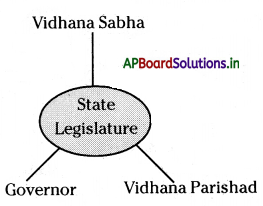 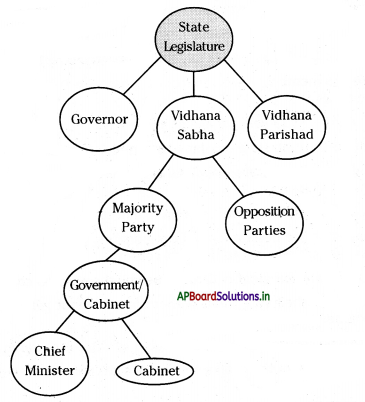