Students can go through AP State Board 7th Class Social Studies Notes Chapter 19 Livelihood and Struggles of Urban Workers to understand and remember the concept easily.

→ Right to productive and safe employment; Right to Leisure and Rest; Right to Employment Security; Income Security; Work Security; Skill improvement; Collective Voice are some of the rights of the workers.

→ In most countries, the governments have agreed that these basic needs of the workers, and made laws that ensure these rights to the workers.

→ The laborer departments have the responsibility to ensure that these laws are followed. & Many registered factories in our country gave these rights only to regular workers but not to casual or contract workers.

→ There are three kinds of workers employed in a factory. They are

→ Trade unions help the workers to get their wages fixed to get facilities such as employees’ state insurance and Provident Fund.

→ The trade unions have secured other benefits to workers such as health check-ups in case of sickness, safety wear in the workplace, educational allowance for workers’ children, etc.

→ Most of these benefits are available only to the permanent workers but not for the casual workers and contract workers.

→ The lot of the workers in a brick kiln is very miserable. They are paid very low wages and are forced to work for 14 to 16 hours per day.

→ The owners of brick kilns gave an advance payment and forced them to work as bonded laborers until their advance is repaid.

→ The sector, in which the workers are not registered as employees, there is no agreement and no protection of law or rules and regulations are called the Informal Sector.

→ In the Informal sector, the workers do not get any regular employment and so they end up as casual workers.

→ In Informal Sector the employment is both irregular and very low-paying.

→ People are forced to do many kinds of works in a day. In most cases, all the members of their families including their children have to work.

→ Their children remain uneducated. They don’t have good food or medicines. Their life is in a vulnerable position.

→ Almost all the workers in the informal sector are heavily in debt and often have to work for them.

→ Not only because of urbanization but also of the closing down of large factories and mills, the number of casual workers is increasing day by day.

→ Compensation: Something, typically money, awarded to someone in the ignition of loses suffering, or injury.

→ Provident Fund: An amount, saved from the earning of an employee with an added contribution from the employer.

→ Wages: Monetary paid by an employer to an employee in exchange for work done.

→ Workers on contract basis: People who are appointed in a company/organization, who are not permanent employees, but for fulfilling the temporary or seasonal requirement.

→ Workers: Regular employees. They are selected directly and paid directly by the employer 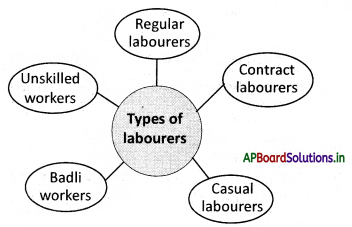 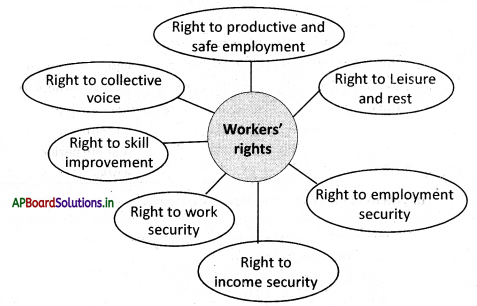